No other classic aquarium fish has had to put up with such a drastic renaming regarding the scientific name as the tiger barb. This is due to the fact that in earlier decades, characteristics that we now consider important species characteristics were only considered an unimportant variance. The actual tiger barb, Puntigrus tetrazona, which comes from Sumatra, has black in its fins, where our aquarium tiger barb has red. In the hobby this real Sumatran barb was practically never represented. Our aquarium fishes come from Borneo. The species P. anchisporus was already scientifically described in 1902, long before the first import of the fish for the aquarium in 1935. However, because of the small differences, which are only to be found in the living coloration, the species was considered to be identical to the P. tetrazona, which was described in 1855 from Sumatra.

The generic name Puntigrus is admittedly very young; it was coined only in 2013, when one finally went to classify the Asian small barbs correctly and according to the natural relations. Previously, one had accommodated it provisionally for centuries in so-called catch-all genera (Barbus, Puntius, Systomus), of which it was quite clear that they don’t form any natural unit. But the gigantic biodiversity of the Asian small-barbs, that is not completely grasped also today yet by far, let earlier attempts, to divide them up reasonably, fail again and again.

For our customers: the magnificent XL tiger barbs illustrating this post have code 371914 on our stocklist. Please note that we supply wholesale only.

About 10 years ago the breeders suddenly focussed again on the old-known tiger barb, whose scientific name is, by the way, Puntigrus anchisporus. Puntigrus tetrazona is a species that is practically never seen in the aquarium, the edges of its fins, which are coloured red in the tiger barb, are black. 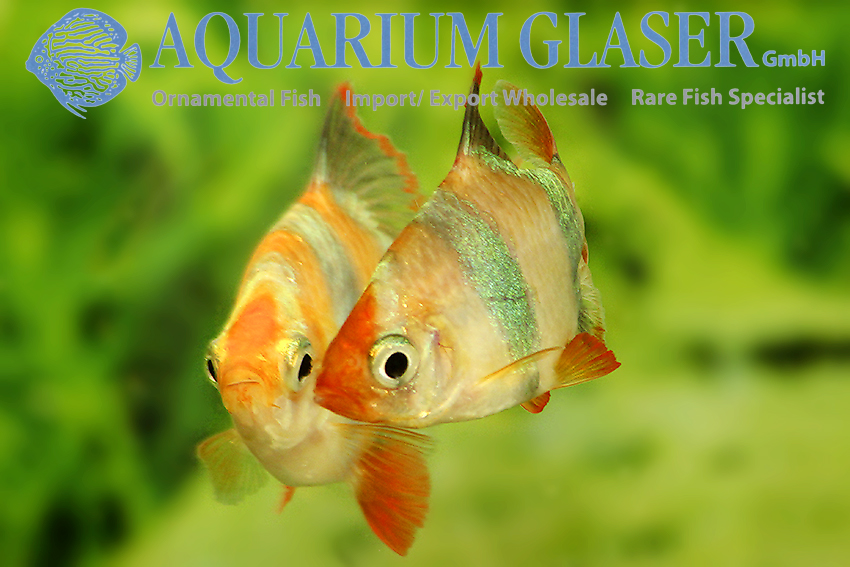 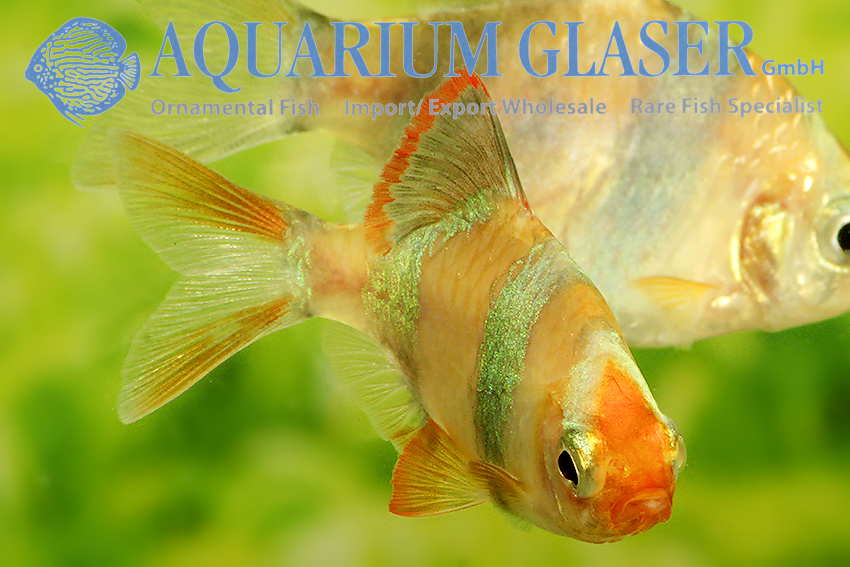 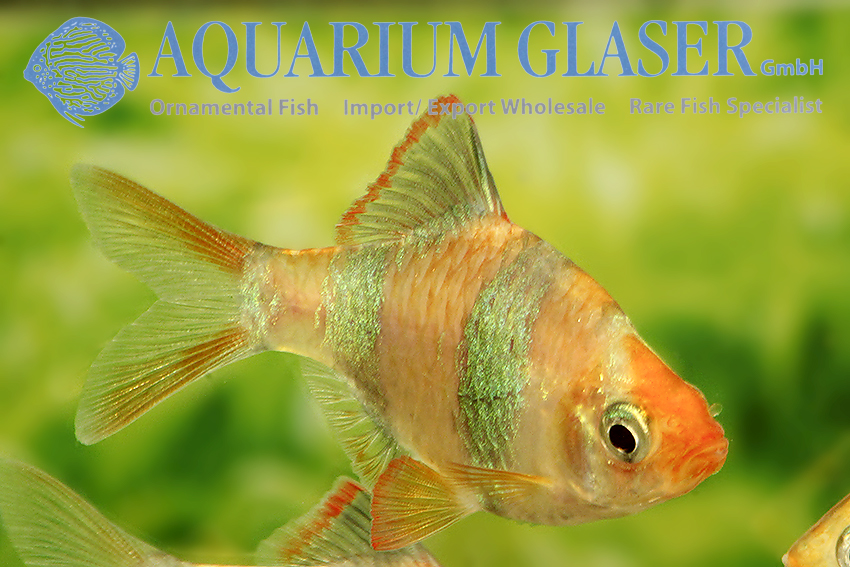 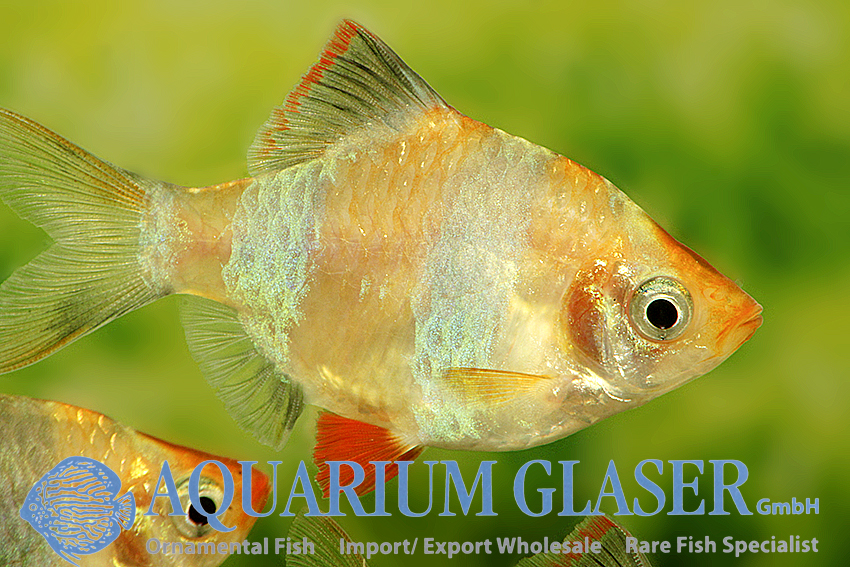 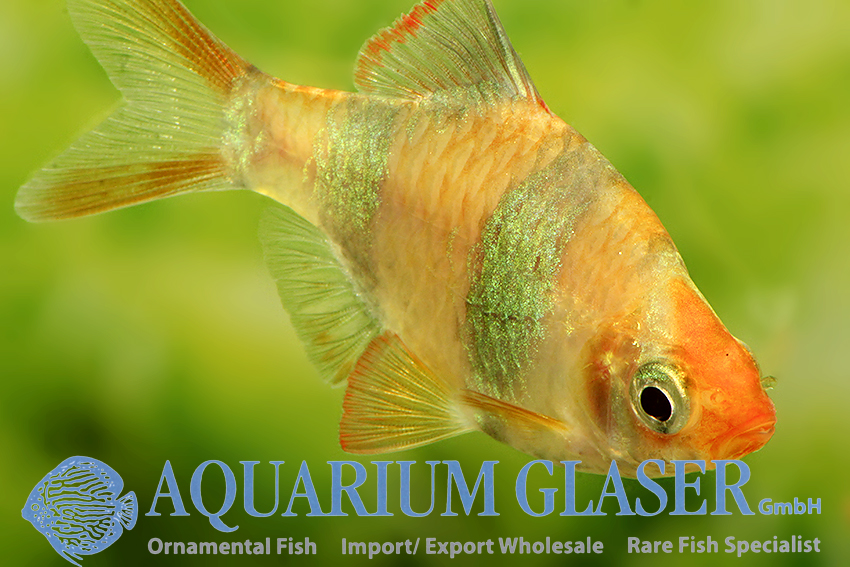 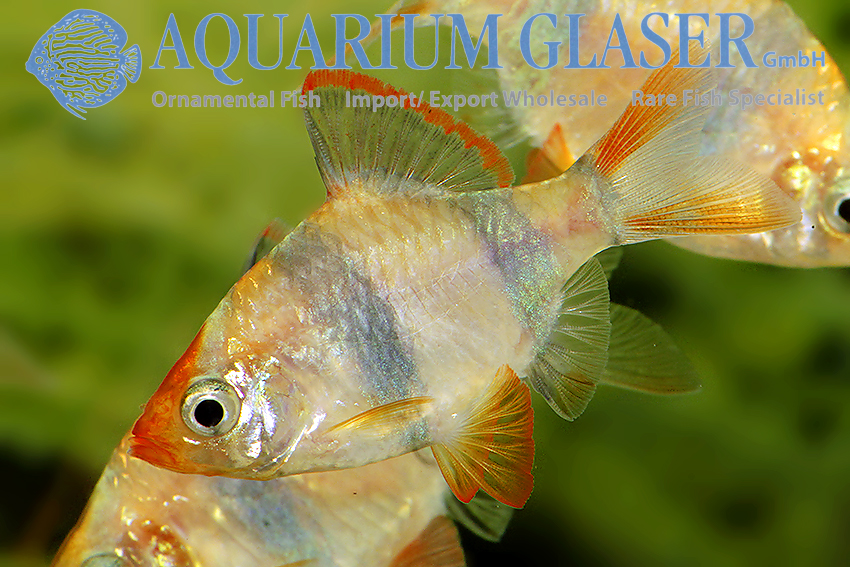 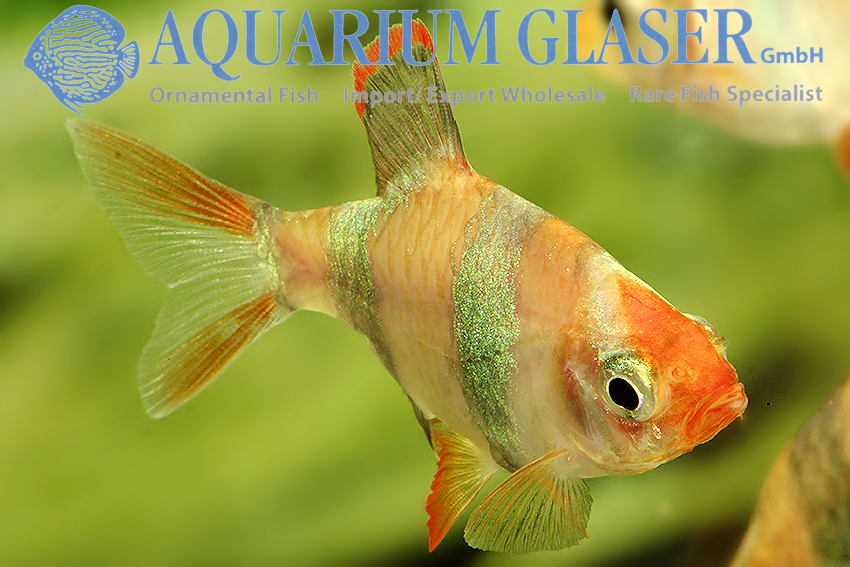 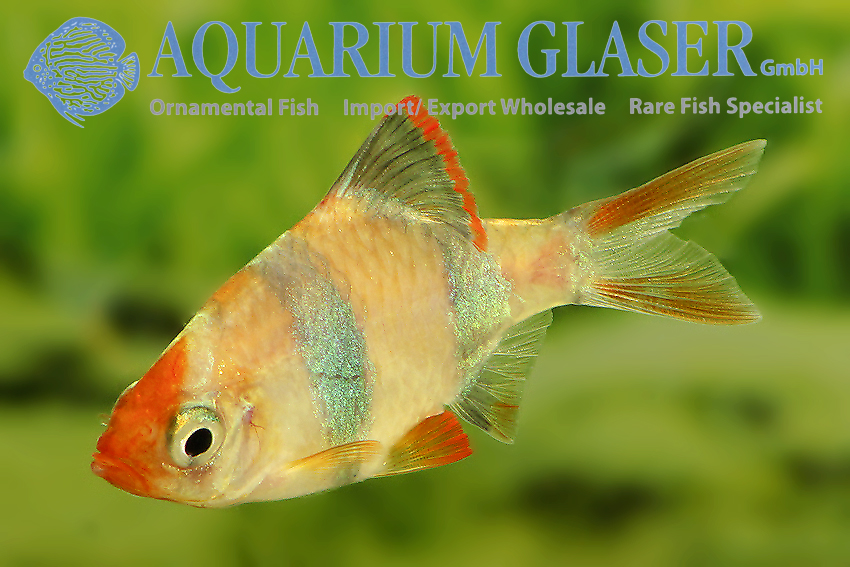 One of the new breeding forms that appeared at that time was the “Gold Green Stripe”. It still exists today and enjoys some popularity. The maintenance breeding of breeding forms is more demanding than that of wild forms, because if you make a mistake and the strain dies out, it has disappeared, while in wild species you can always fall back on specimens from nature.

Thus breeding forms are a good reflection of the breeding abilities of the farms involved and in the case of the “Gold Green Stripe” one must say – no matter whether one likes this special breeding form or not – the breeders master their craft! They are vital animals with excellent body and fin shape.

For our customers: the animals have code 372053 on our stocklist. Please note that we only supply the wholesale trade.

Many people will still know the tiger barb under the wrong name Barbus or Puntius tetrazona. This species – the correct name is Puntigrus tetrazona – is, however, never kept in aquaria or traded, but exclusively the close relative Puntigrus anchisporus. Both species can be easily distinguished from each other by the colour of the ventral fins, which are pitchblack in tetrazona and deep red in anchisporus. 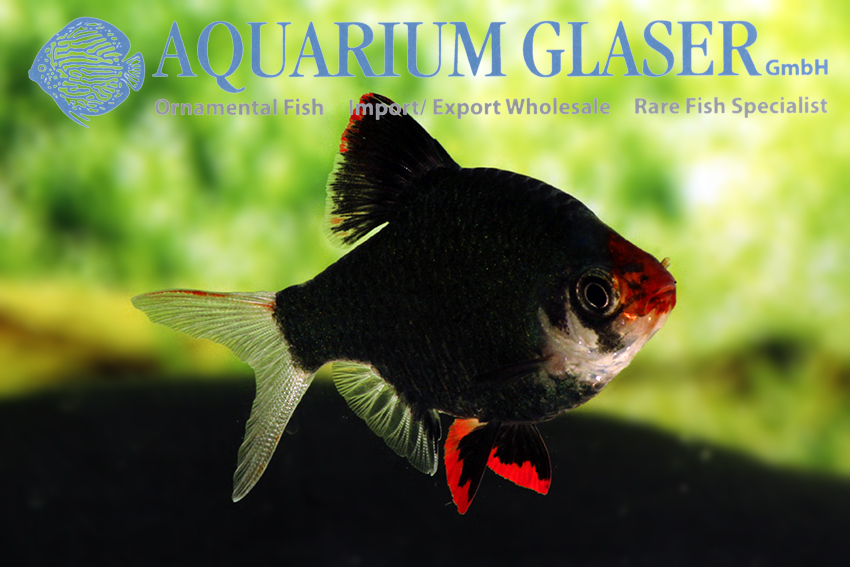 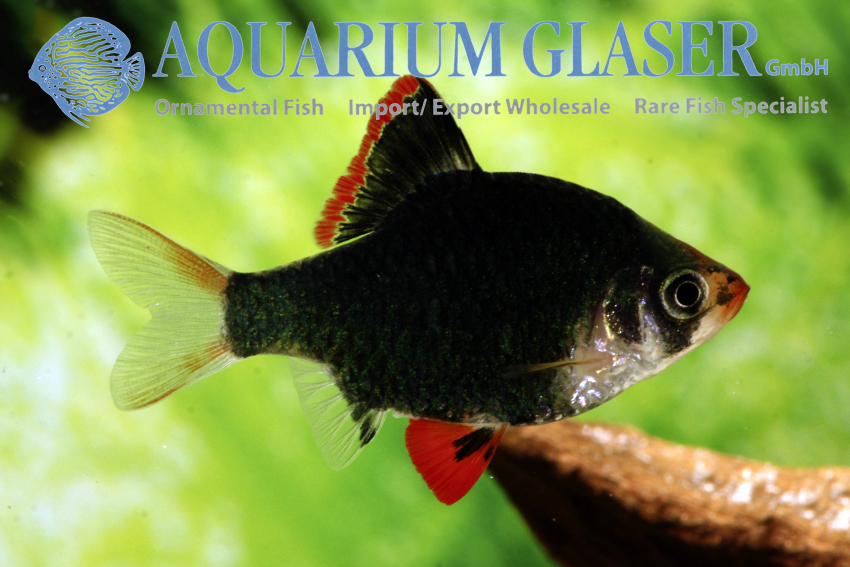 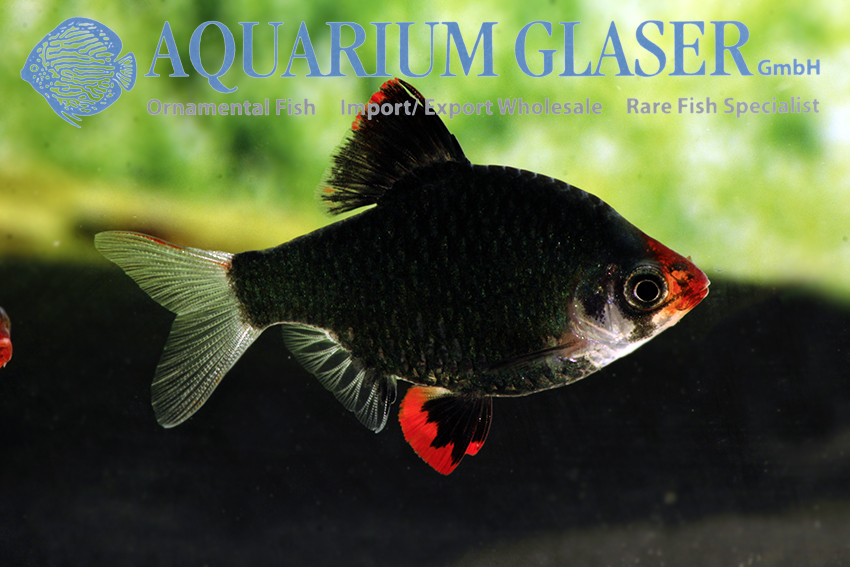 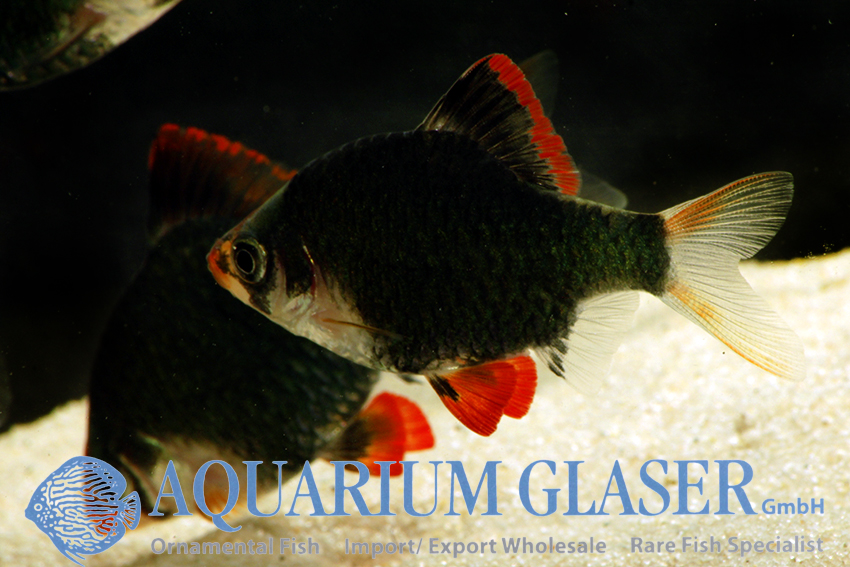 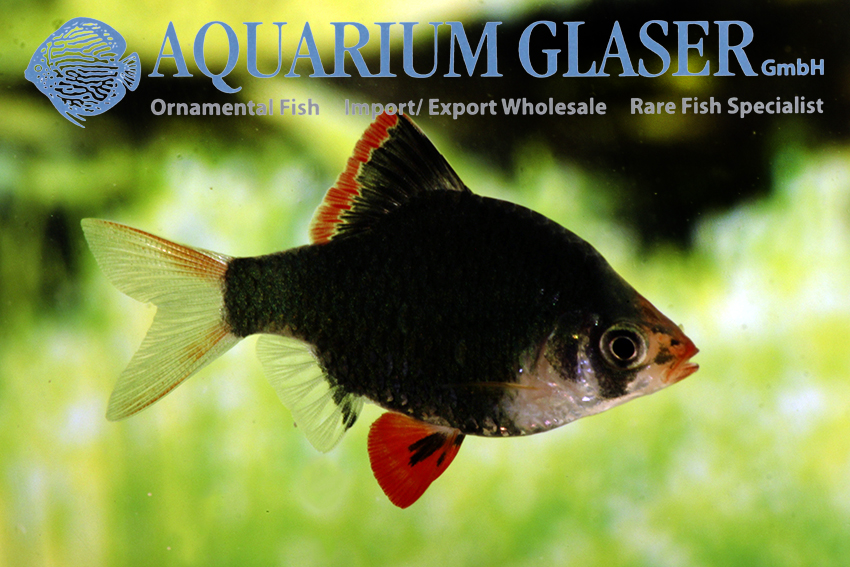 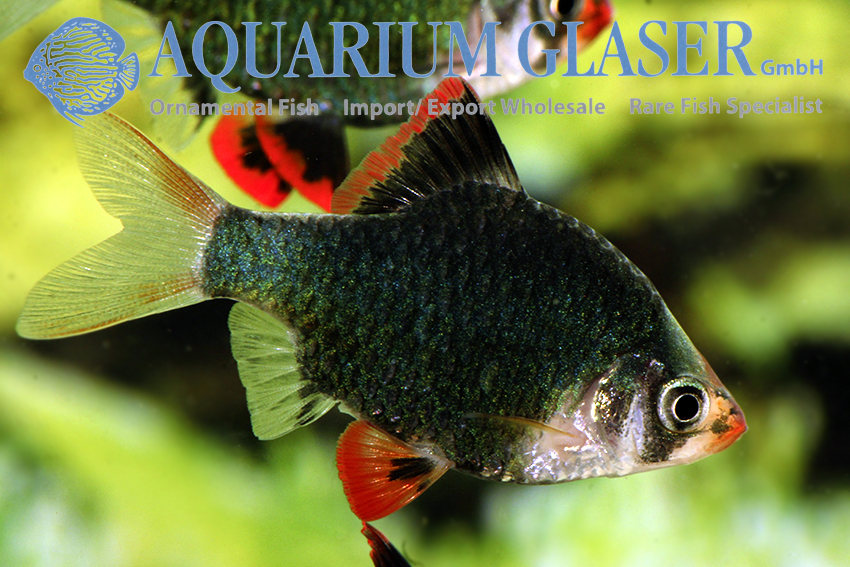 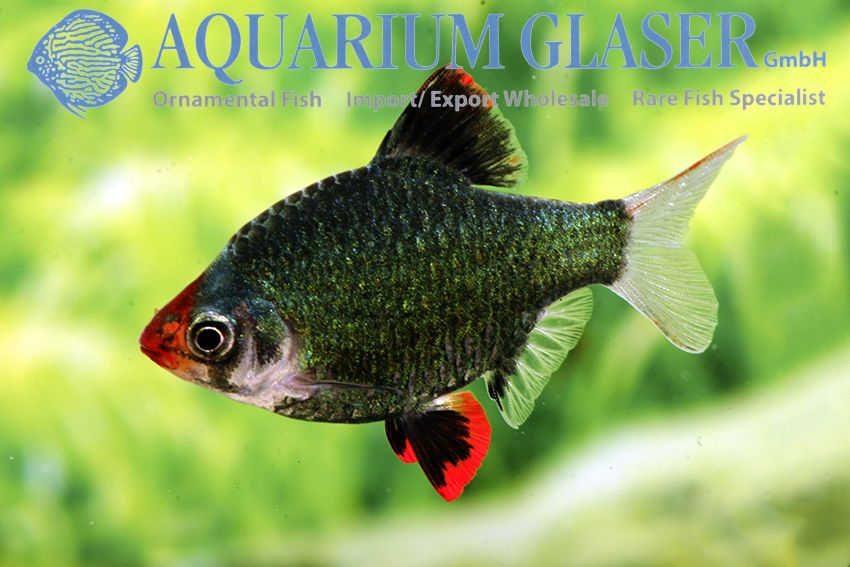 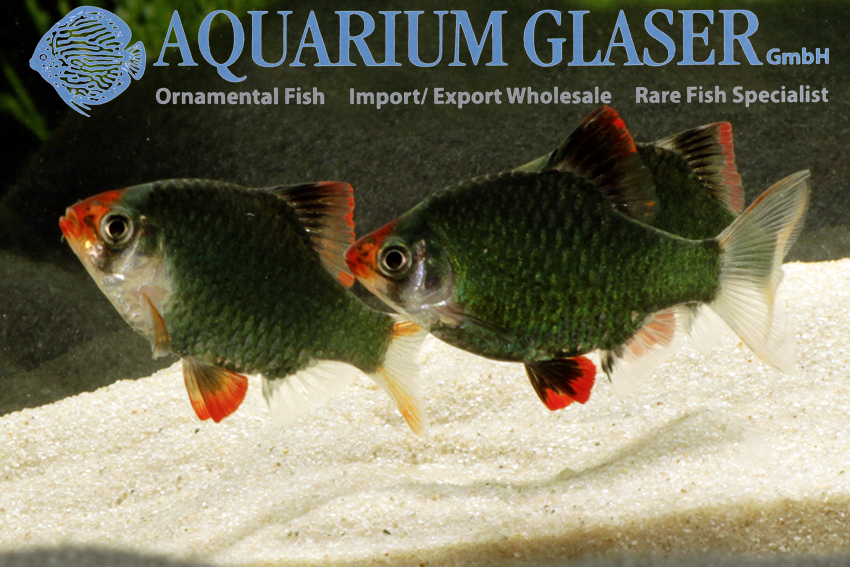 The sport „moss green“ of P. anchisporus was developed in the 1970ies. In that sport the dark vertical stripes of the wild form are melted together in one solid zone. In all other aspects these moss greens are typical tiger barbs – swashbucklers that never show fear. Due to the extreme play instinst of that species one should never keep tiger barbs along with fish species that require quiet or that have extended fins.

For our customers: the fish have code 372212 on our stocklist. Please note that we exclusively supply the wholesale trade.