The Funge is a river or, rather, estuary in southeastern Cameroon in the district of Ndian. The Funge is less than 40 km long and is part of a system of coastal marshlands whose best known outlet is the Rio del Rey. This in turn is in contact with the Cross River drainage, which forms the border between Cameroon and Nigeria. From this wild, beautiful and internationally protected landscape comes the population of the killifish Aphyosemion bivittatum, which we present to you here. Of course the fish we can offer are, as almost always with Killifishes, captive bred specimens.

Chromaphyosemion are wonderful beginner killifishes, as they can definitely be kept in community aquariums with calm small fish. Their life expectancy is as high as of other small fish species, so they are not seasonal fish. Usually such animals become 2-3 years old. Aphyosemion bivittatum is an adhesive spawner that lays its eggs on fine-grained plants, roots, etc. The eggs take about 14 days to develop. Since Aphyosemion bivittatum is considered to be exceptionally voracious, this species will also sometimes eat its own spawn, which is otherwise uncommon in killies.

For our customers: The species has code 305512 on our stock list. Please note that we only supply wholesale.

Within the genus Fundulopanchax, which was established already in 1924, but then was seen as a synonym to Aphyosemion for a very long time, there are very large species, like F. sjostedti, which can reach 12 cm (see https://www.aquariumglaser.de/en/fish-archives/fundulopanchax_sjostedti_usa_blue_en/), but also many small species, which do not grow longer than 6 cm. Among the latter is Fundulopanchax scheeli. This small beauty was described in 1970 from aquarium specimens of unknown origin. Only much later it was found out that F. scheeli has only a small distribution area at the lower Cross River in southeastern Nigeria.

This killi is relatively popular because of its good breedability and beauty. It can be recommended, similar to the “Cape Lopez” even with restrictions for community aquariums. However, the company in such a case must be selected very carefully. In a colorful “teeming tank” or with aggressive fishes F. scheeli must not be housed under any circumstances. They need calm, densely planted aquariums with soft, dark substrate (peat fibers) to feel safe. In such an aquarium you will have a lot of fun with the animals.

For our customers: the animals have code 313702 on our stock list. Please note that we supply only wholesale.

The “Cape Lopez” (Aphyosemion australe) is one of the longest serving killifishes. It was discovered due to aquarium imports from Gabon (Ogooué River estuary, Port-Gentil, Cape Lopez, northwestern Gabon), from where it was first brought in 1913. In 1921 Arthur Rachow described it as a new species, then cautiously as Haplochilus calliurus var. australis. The close relationship to Haplochilus calliurus (today Aphyosemion calliurum) assumed by Rachow has not been confirmed, the two species cannot be successfully interbred beyond a first generation.

It is not even that unlikely that many of the Cape Lopez kept in aquariums today are still descended from these first imports. In the 1950s a golden colored mutant was added, which was given the scientifically invalid name Aphyosemion australe hjerreseni, and later a dark brown breeding form, called “chocolate”.

The Cape Lopez is among the simplest of all killifishes. It is a plant spawner and the eggs can develop both underwater and stored dry. Few killifishes are suitable for community aquariums, but the Cape Lopez is one of them because it is not very shy and is also uncomplicated with regard to feeding. Of course one must select a possible company with much expert knowledge, by-fish must be absolutely very peaceful and not too lively.

The life expectancy of the Cape Lopez is about the same as for similar sized livebearers (e.g. guppies), i.e. 1-3 years. The maximum size for Aphyosemion australe is given with approx. 5,5 cm (including tail fin).

For our customers: the wild form has code 304502, the golden 304702 on our stocklist. Please note that we only supply wholesale.

Only extremely rarely, this pretty, maximum 7 cm long killifish is offered in the trade. Formerly, Fundulopanchax spoorenbergi was placed in the genus Aphyosemion. The species appears from Nigeria to Cameroon. 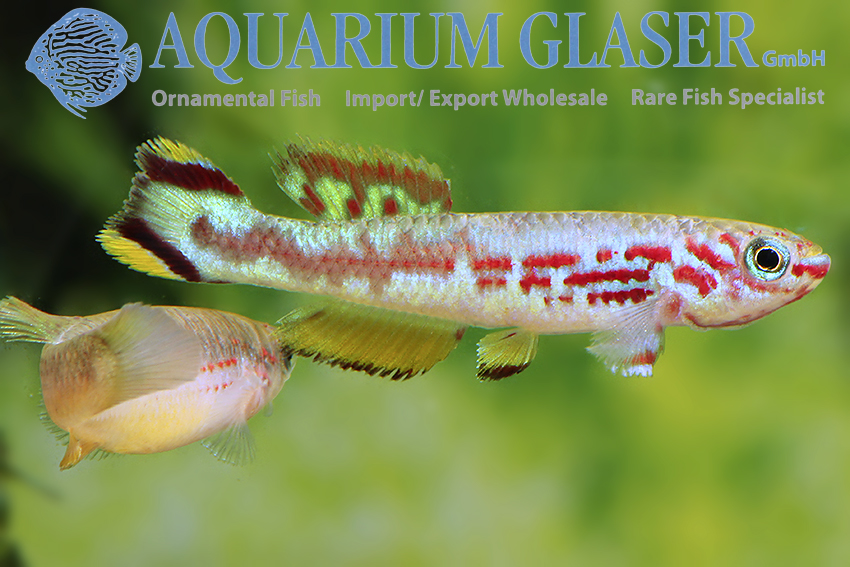 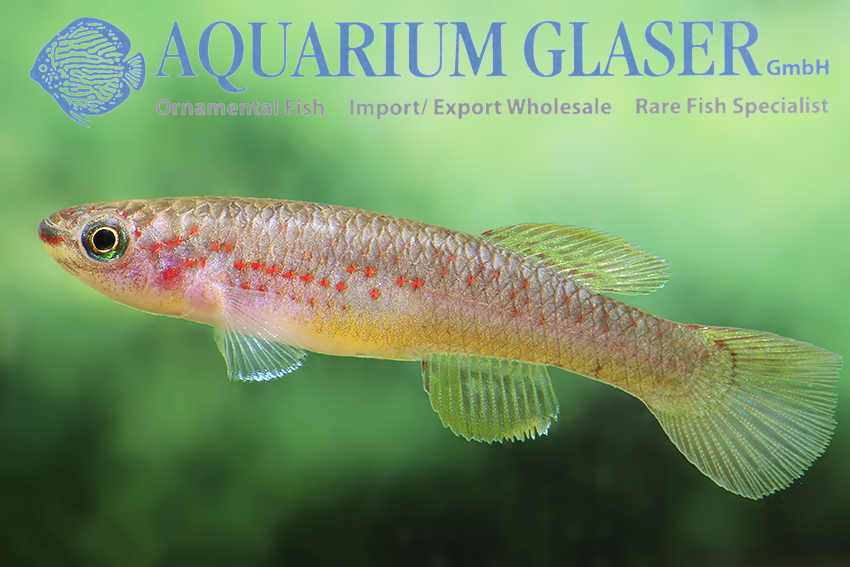 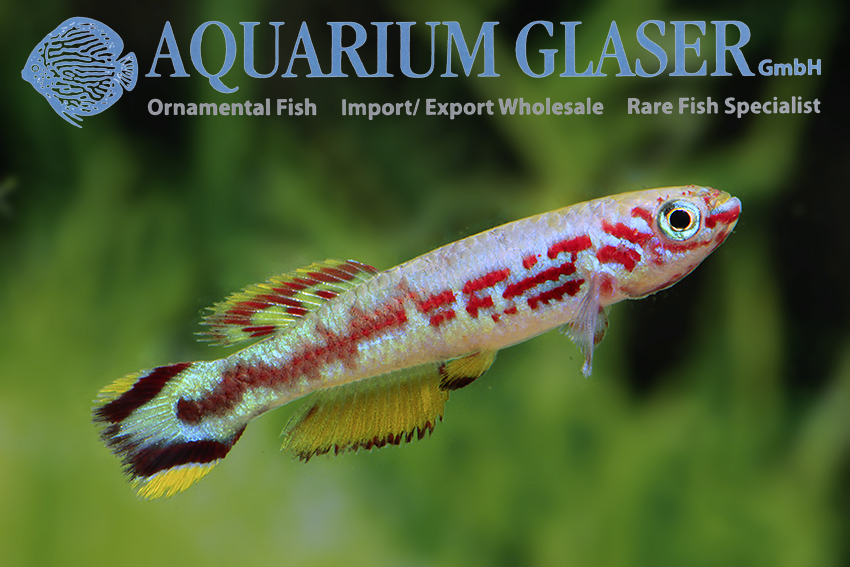 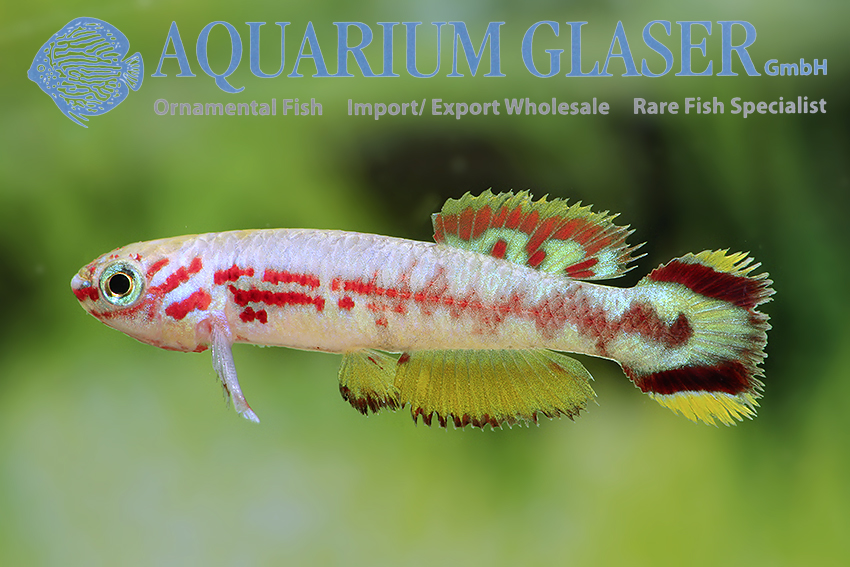 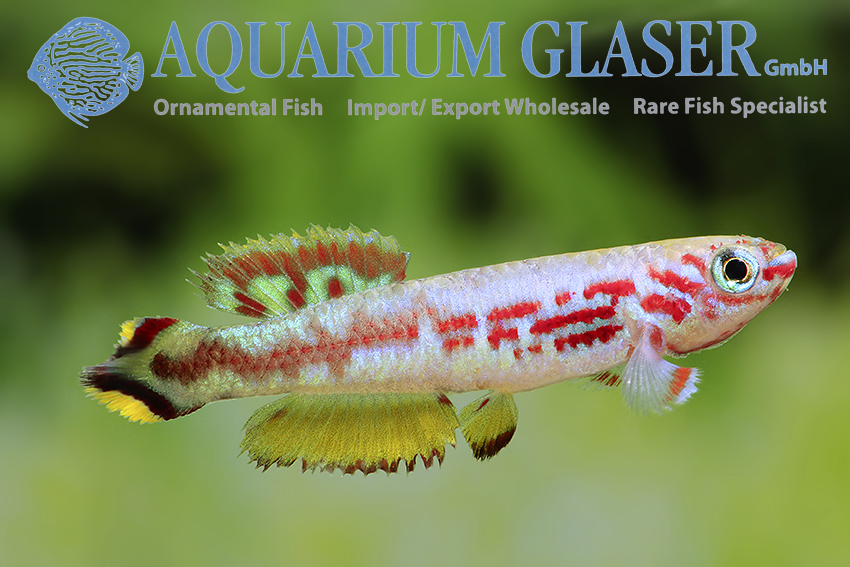 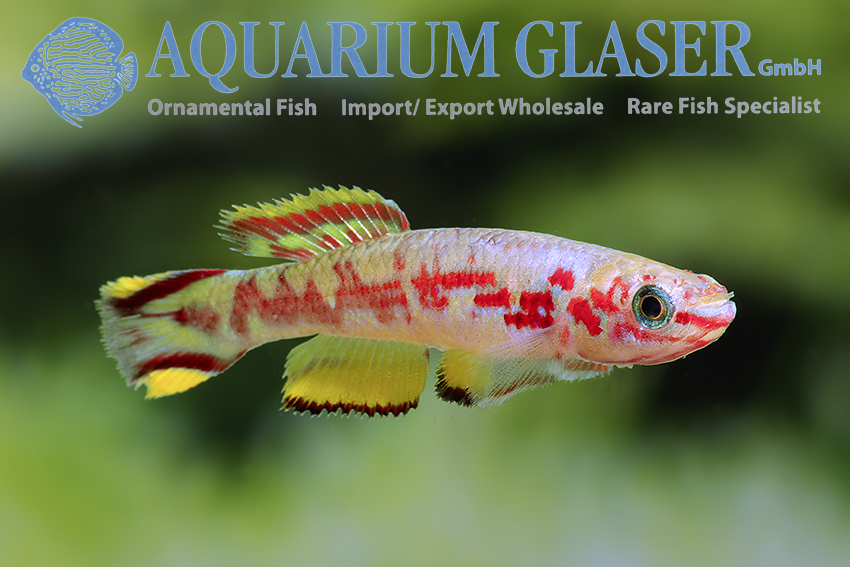 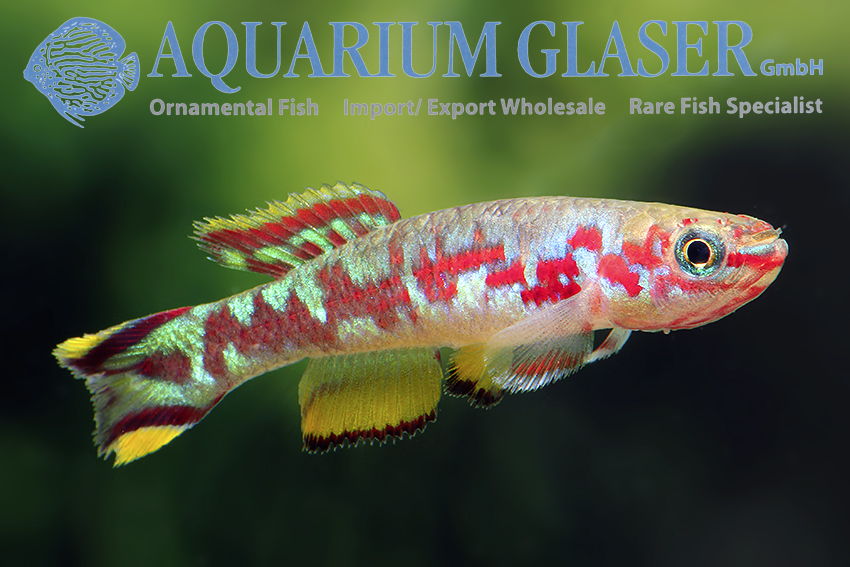 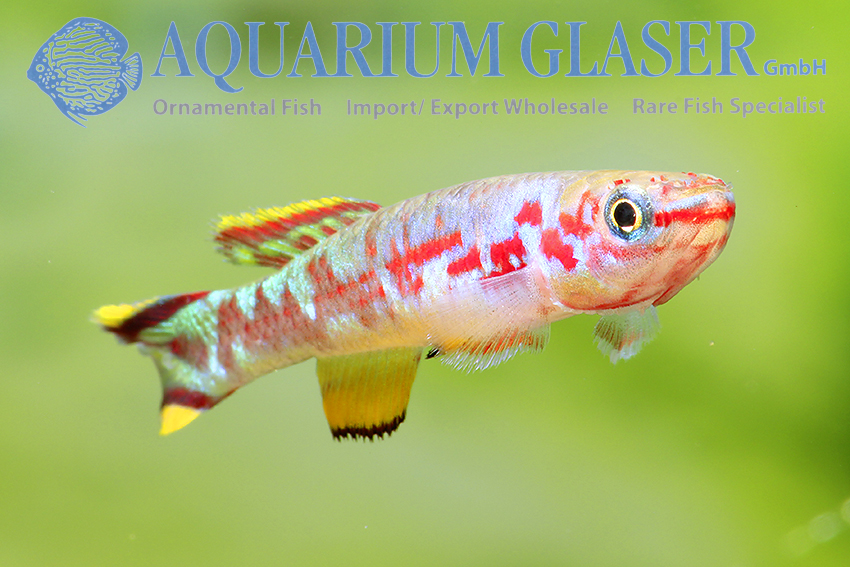 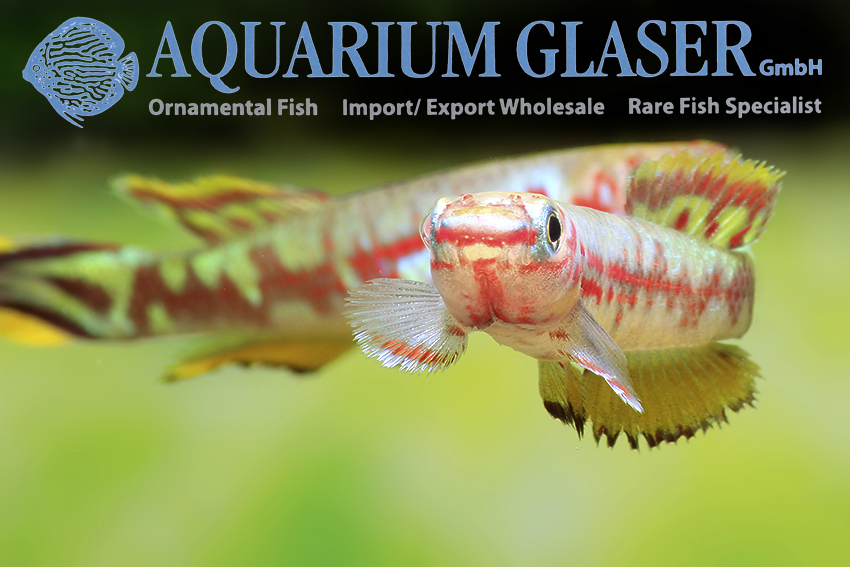 No fear of short-lived Killifishes: this species is approximately as long-lived as other popular aquarium-fish, like Guppys or Platys. It should be noted that the males of Fundulopanchax spoorenbergi like to quarrel and are always ready to mate. Therefore, numerous hiding places in the aquarium for inferior males and annoyed females have to be provided. Even if killifish in general are not well suited for typical community aquariums (they simply get lost there), they can still be kept problem free together with small tetras and barbs of the region.

For our customers: the animals have code 314283 on our stocklist. Please note that we only supply wholesalers.

This gorgeous killi originates from Gabon. We can currently offer very nice German bred ones. The beautiful red and yellow colours fit perfect in the x-mas time, don´t they? Keeping and breeding the up to 4.5 cm long species can be compared with the by far better known lyretail killi, Aphyosemion australe. 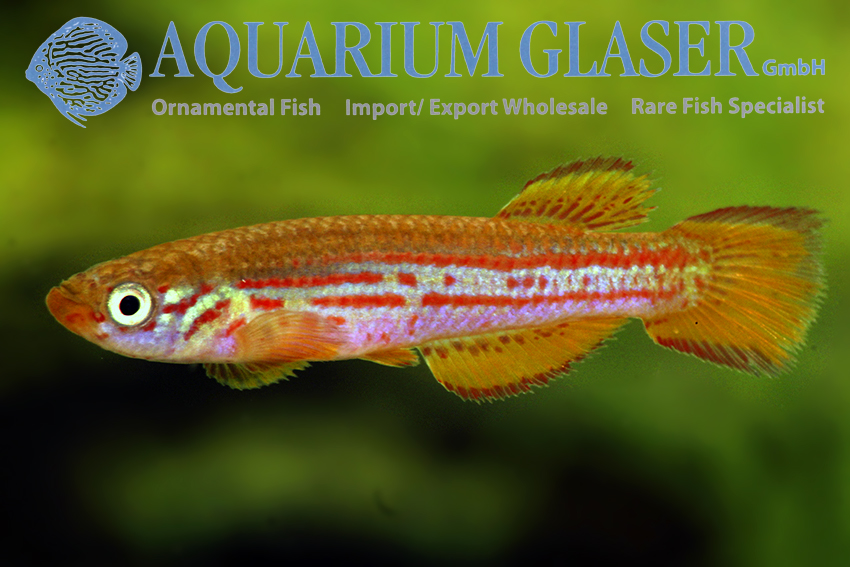 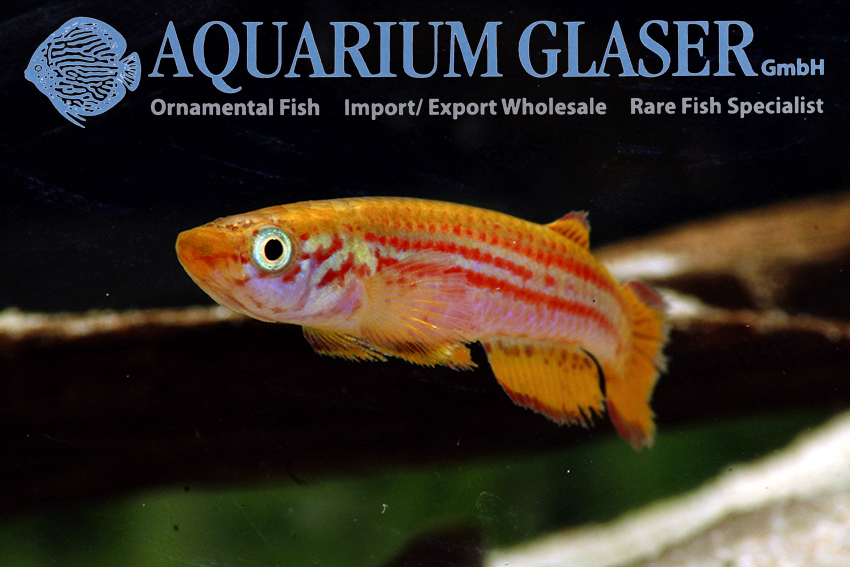 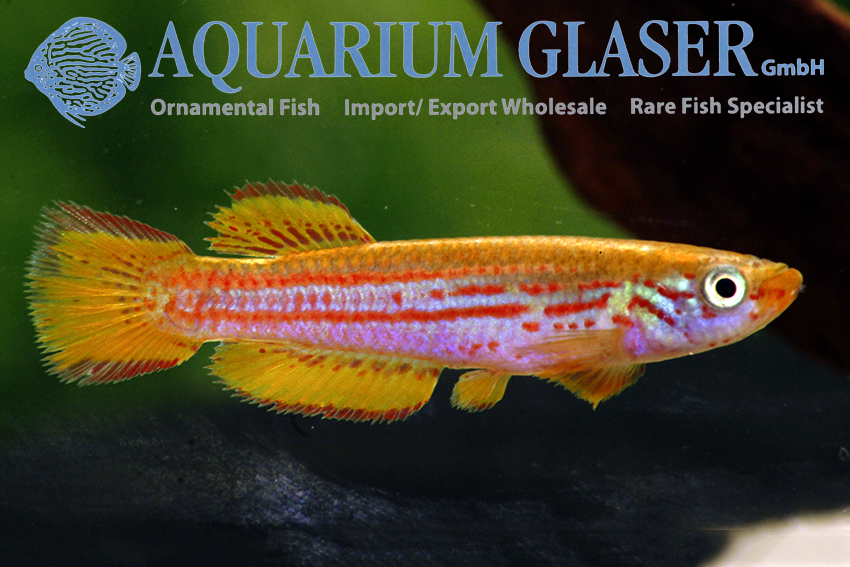 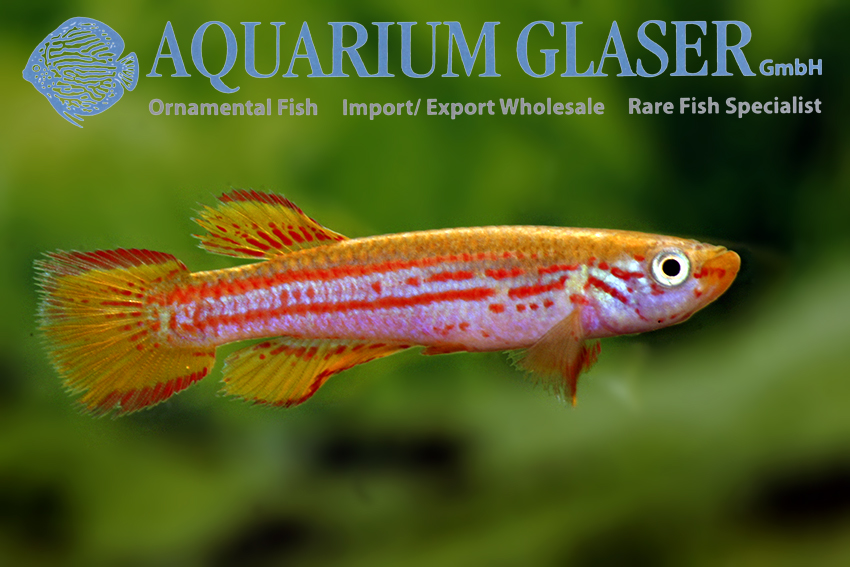 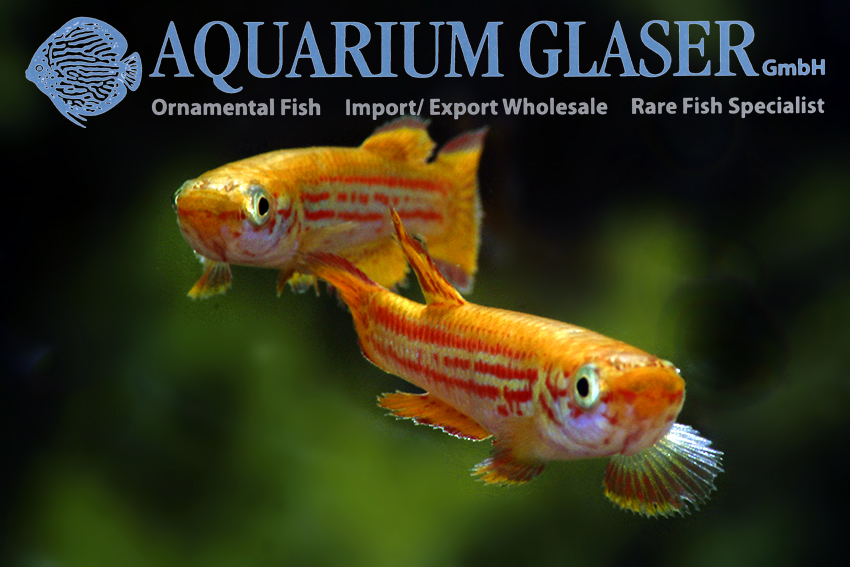 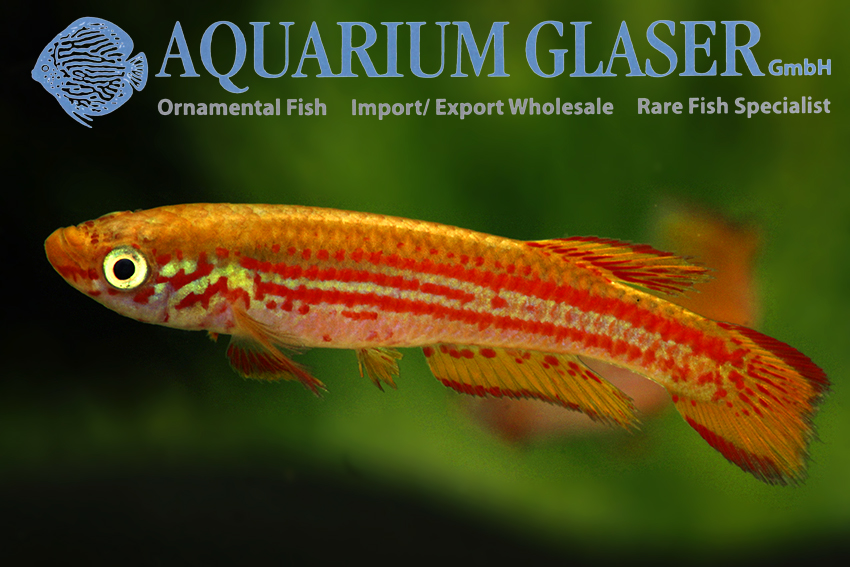 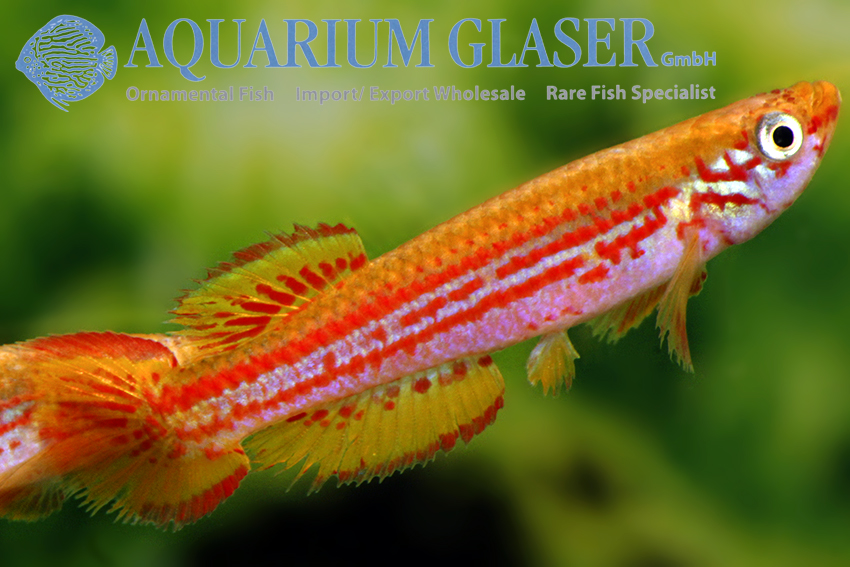 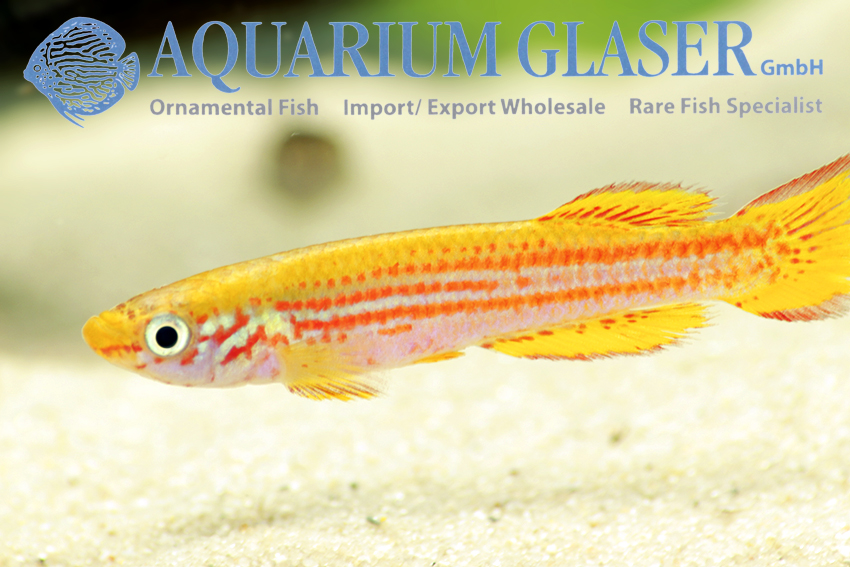 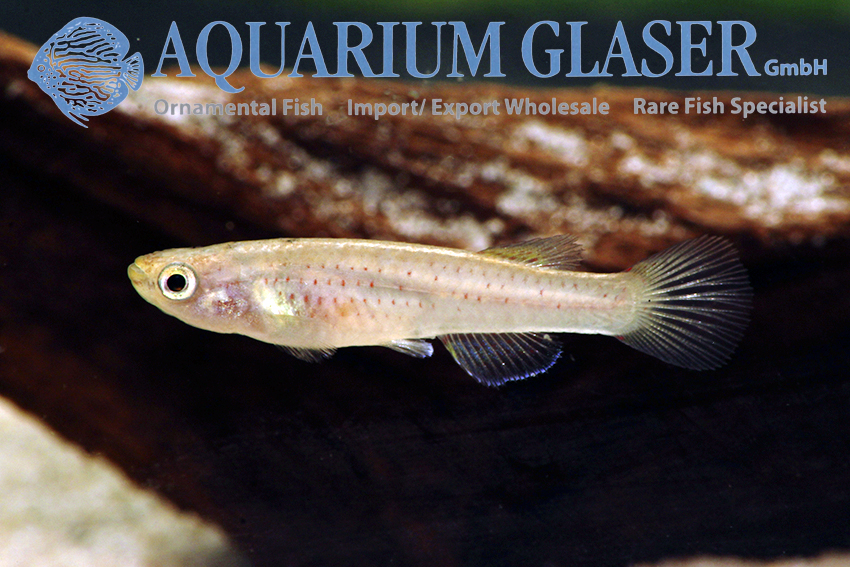 For our customers: the fish have code 313302 on our stocklist. Please note that we exclusively supply the wholesale trade. 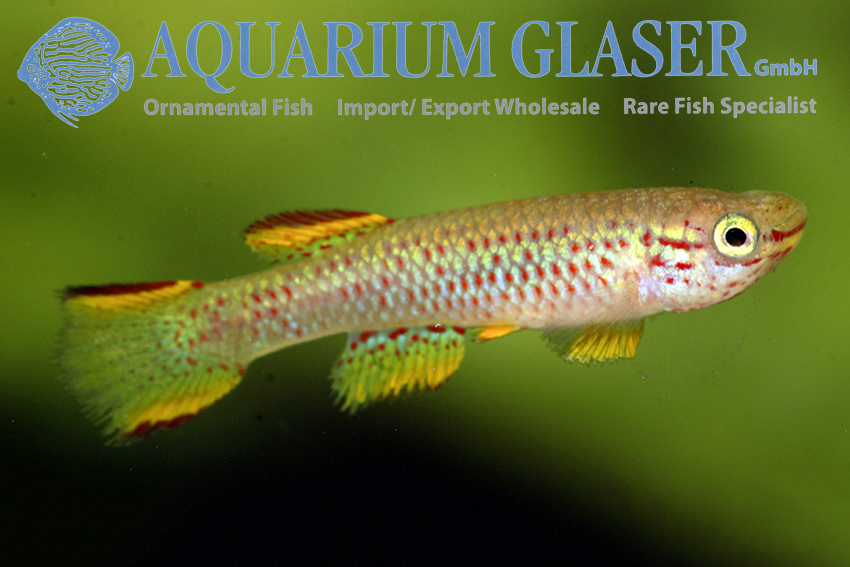 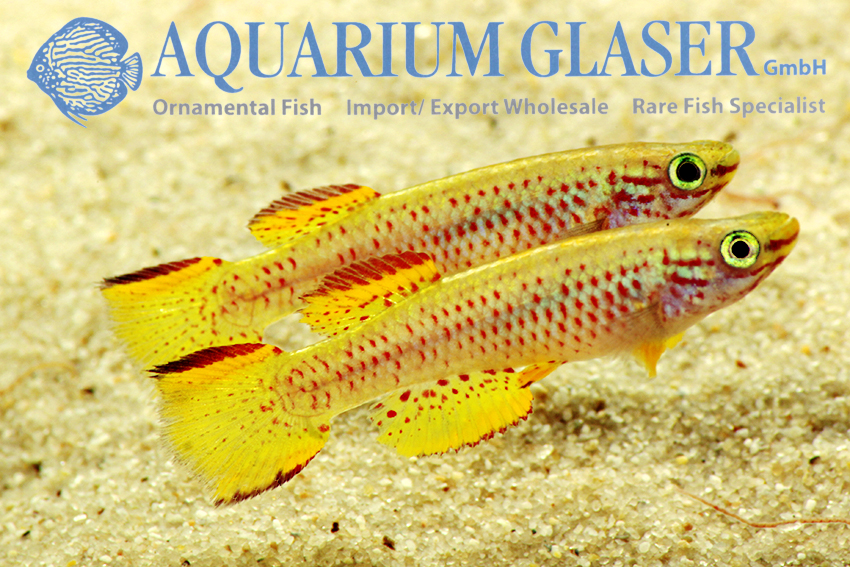 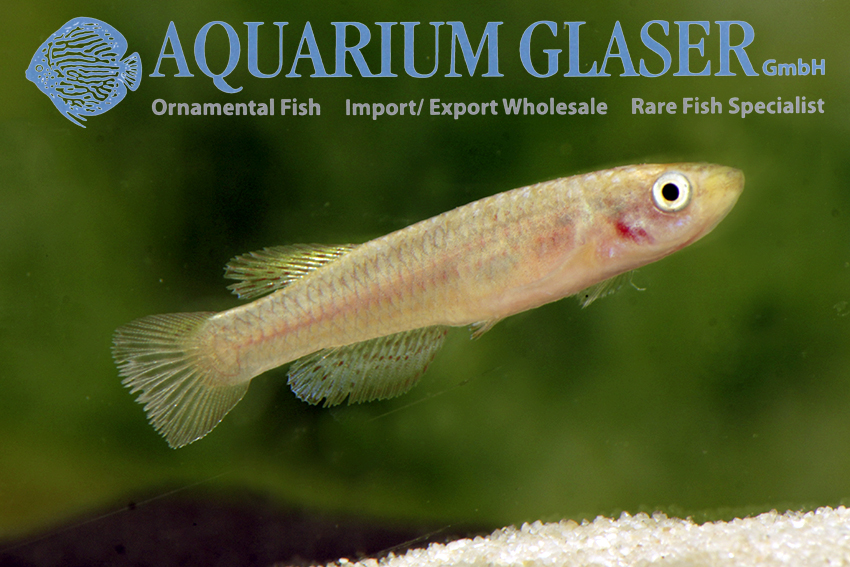 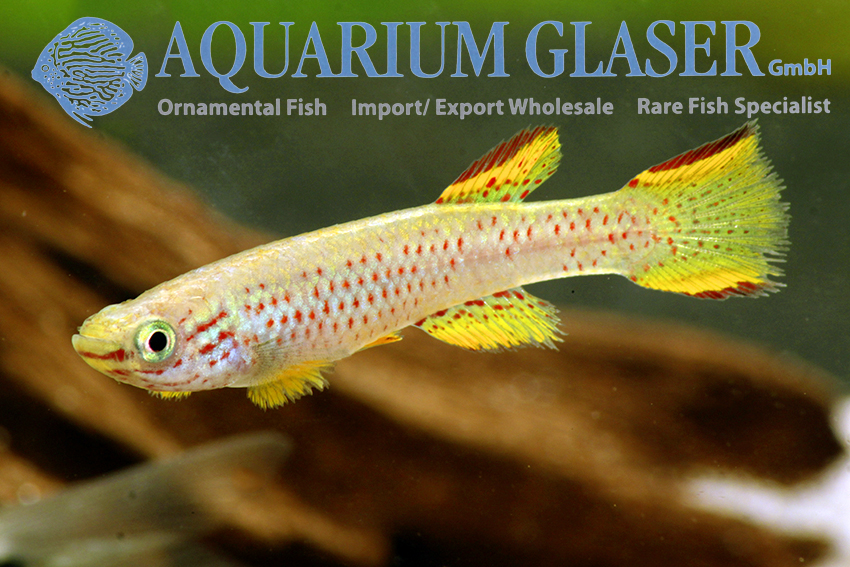 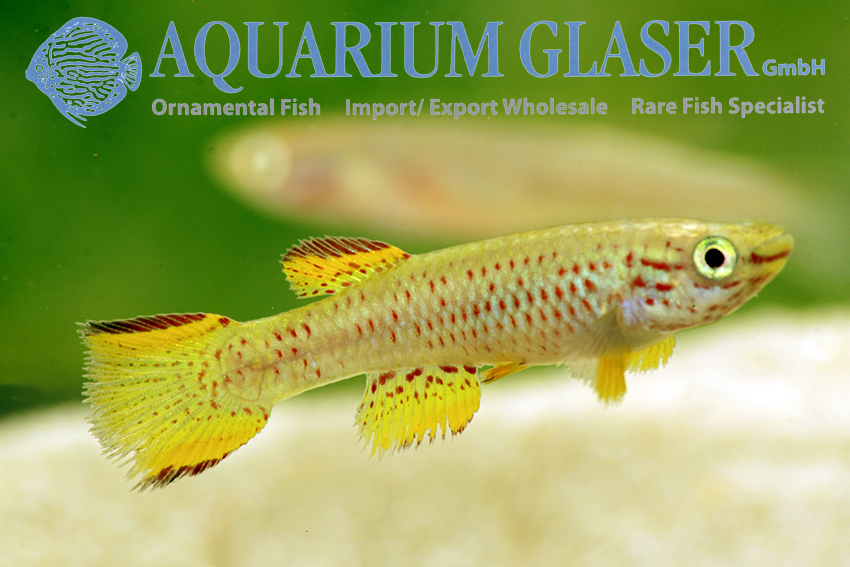 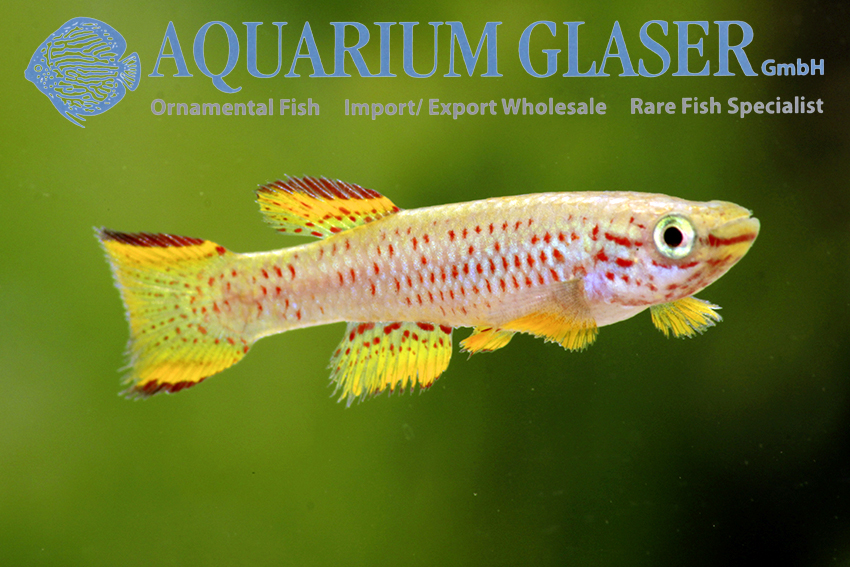 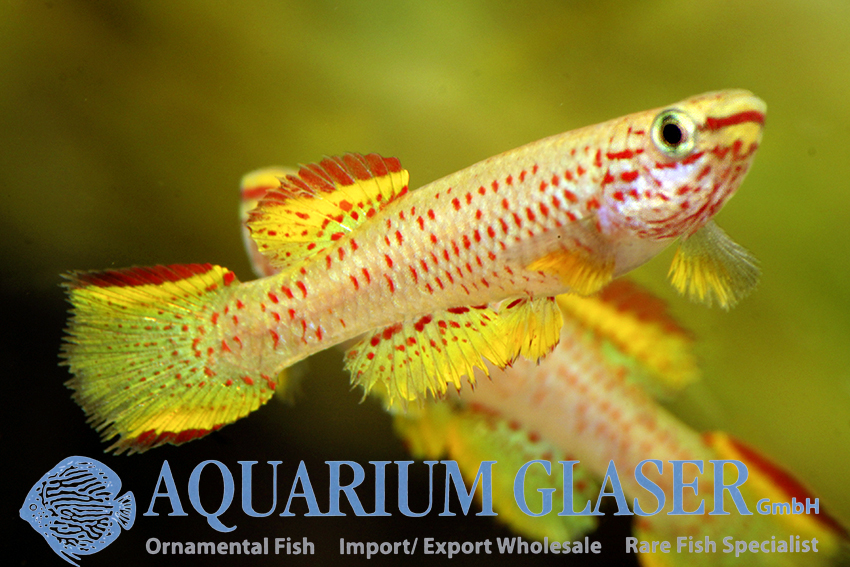