Because of the still bad flight connections imports from India come in only sporadically. Now once again an import worked out. It contained among others the common panchax, Aplocheilus panchax. A. panchax is the most common fish in large parts of India and can be found literally everywhere, from the smallest puddle to the shores of large rivers and lakes, even the salty water of estuaries can be tolerated by the panchax. The water temperatures especially in the small waters vary enormously, in the sun they easily rise to well over 30°C, at night they can cool down to 12-14°C.

So it is not surprising that Aplocheilus panchax was one of the first tropical ornamental fishes ever. It came to us for the first time in 1899 and was quickly bred. The great color variability of this 6-7 cm long fish caused heated, sometimes polemic discussions about whether they were species, subspecies or color morphs. Today we know: they are color morphs, reddish, orange and white fin seams occur within a single population, also the number of orange-red spots on the scales varies.

After World War 2, the Panchax gradually disappeared from aquariums. People had electric heaters (instead of spirit burners under the aquarium), filters and aeration, and especially lighting. Previously, aquariums were placed at an angle to the window, so that the sunlight coming from the side illuminated the aquarium. In such light panchaxes are quite colorful, because many scales shine blue. This is quite different in fluorescent light from above, where the Panchax appear quite gray, especially if they are not yet acclimated. We’ve also attached a shot to this post where the lighting conditions are like they used to be, so you can see what we mean.

For our customers: the animals have code 303703 on our stocklist. Please note that we supply exclusively to wholesalers.

The Green panchax (Aplocheilus blockii) is one of the tiniest and most beautiful species of panchax in Asia. We were able once more to import the species from Kerala (South India). Its maximum length is around 3 cm, at least as far as wild collected specimens are concerned. Aquarium specimens may become a bit larger due to the paradise-like aquarium conditions. The absolutely peaceful animals are ideally suited for the so called nano-aquaria. Regarding water chemestry the species is not demanding at all, but very soft or very acidic water should be avoided. In the case such a water runs out of the tap, one should add a teaspoon of salt (for reef aquaria) per 10 litres of water.

Live food is very much wanted, but the fish also feed readily on frozen or dried food items. The Green panchax ignores plants with the exeption of spawning. Here the fish prefers the roots of small swimming plants like Salvinia.

For our customers: the fish have code 303213 on our stocklist. Please note that we exclusively supply the wholesale trade.

The striped panchax (Aplocheilus lineatus) from South India has been inspiring generations of aquarists for over 100 years. Its magnificent coloration compensates for its sometimes quarrelsome temperament. One should not keep the striped panchax together with too tender fish, very small fish are also eaten by the up to 10 cm long animal. But with medium-sized barbels, catfish and labyrinth fish the care is problem-free and here the striped panchax is a perfect tankmate for the upper water layers.

In the last years mainly the golden cultivated form of the striped panchax was in the trade, we have now once again received wild-colored fish, which are really beautiful and for better differentiation from the golden ones are called “Red”.

For our customers: the animals have code 303603 on our stocklist. Please note that we only supply the wholesale trade.

The golden sport of Aplocheilus lineatus is very popualr in the aquarium hobby and the only member of the genus that can be found on a regular basis in the petshops. The reason for that is quite simple: the golden sport exhibits even as a small juvenile (3-5 cm length) already the attractive coloration, while wild coloured Striped Panchaxes of that size have still a dull grey colour. 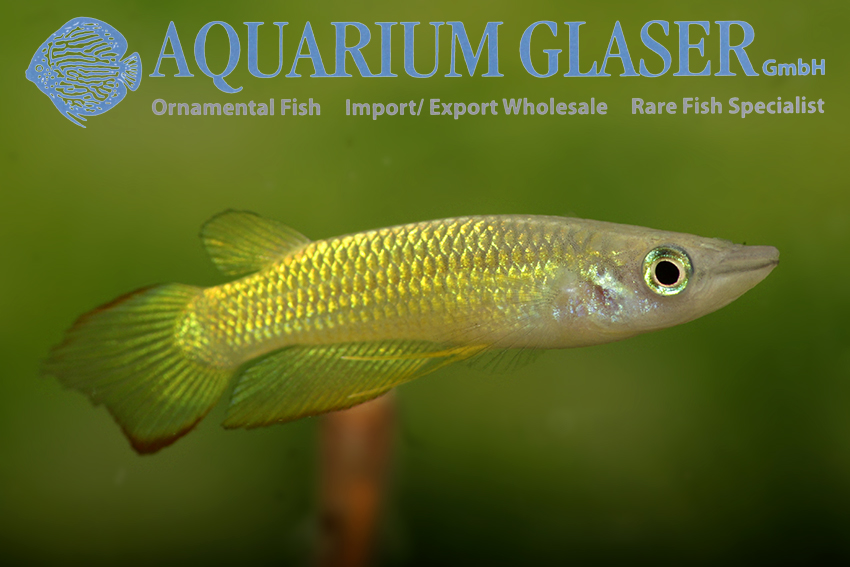 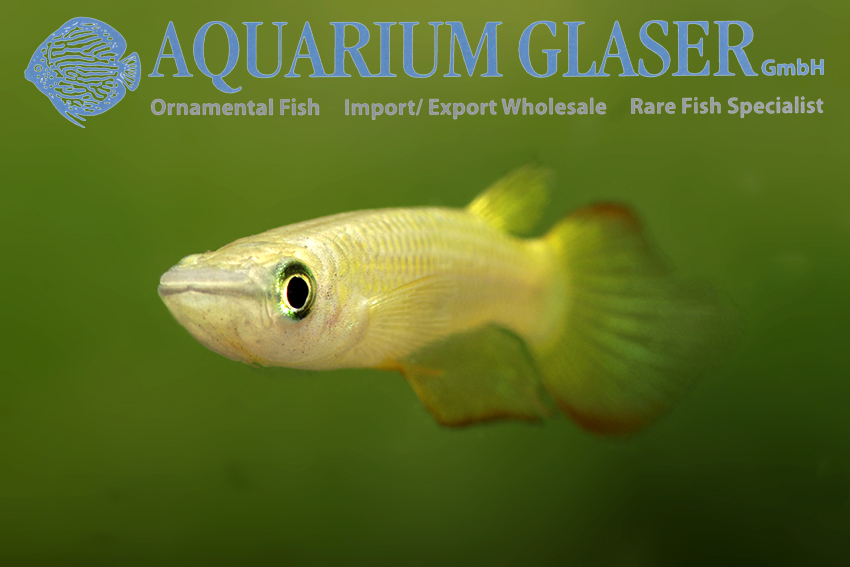 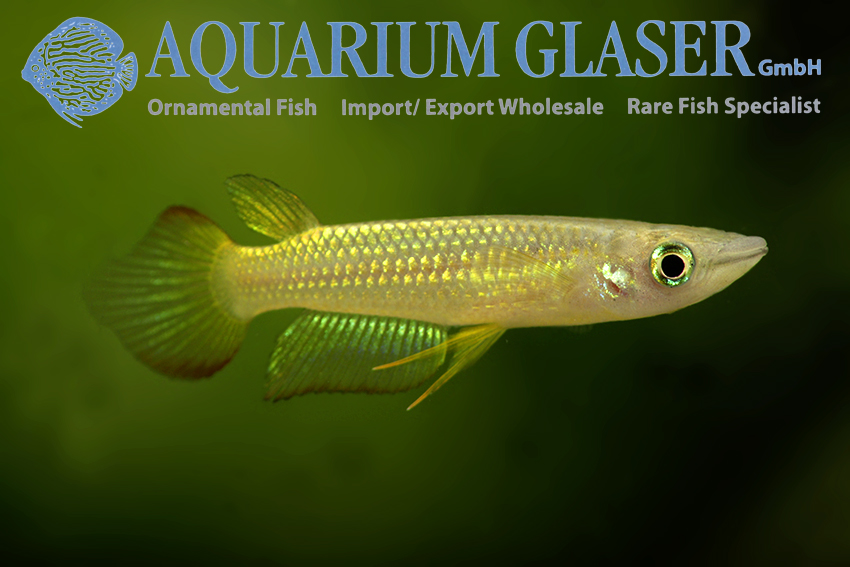 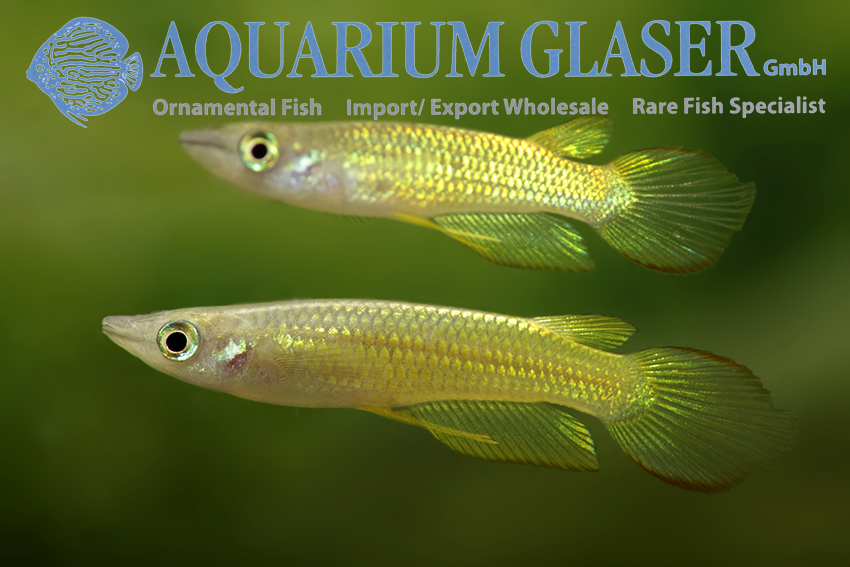 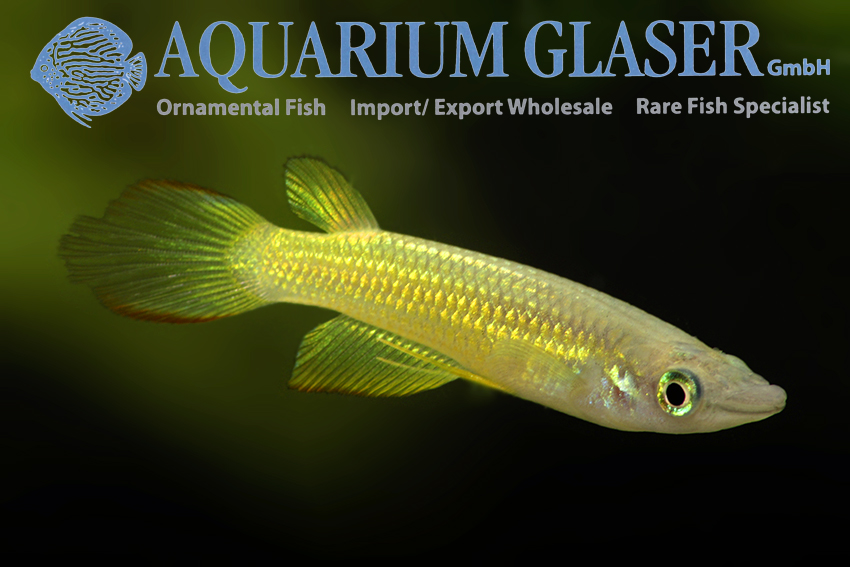 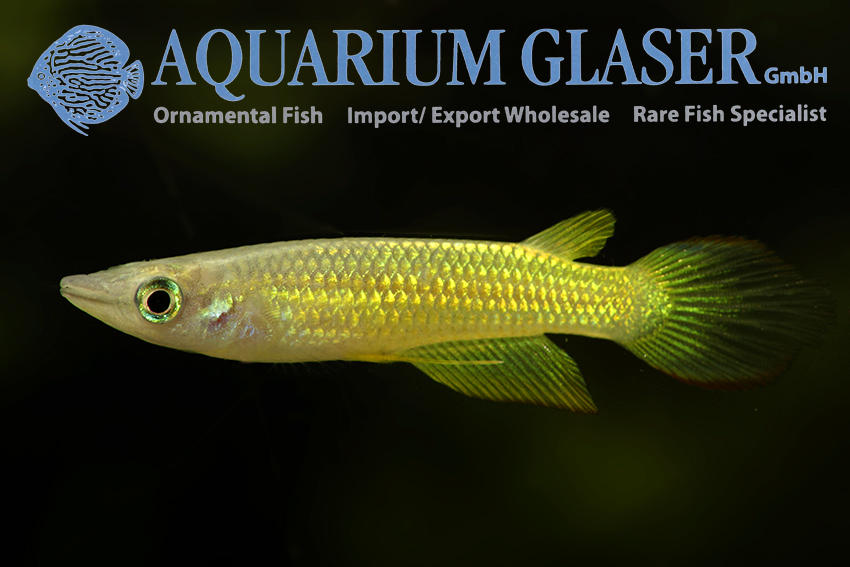 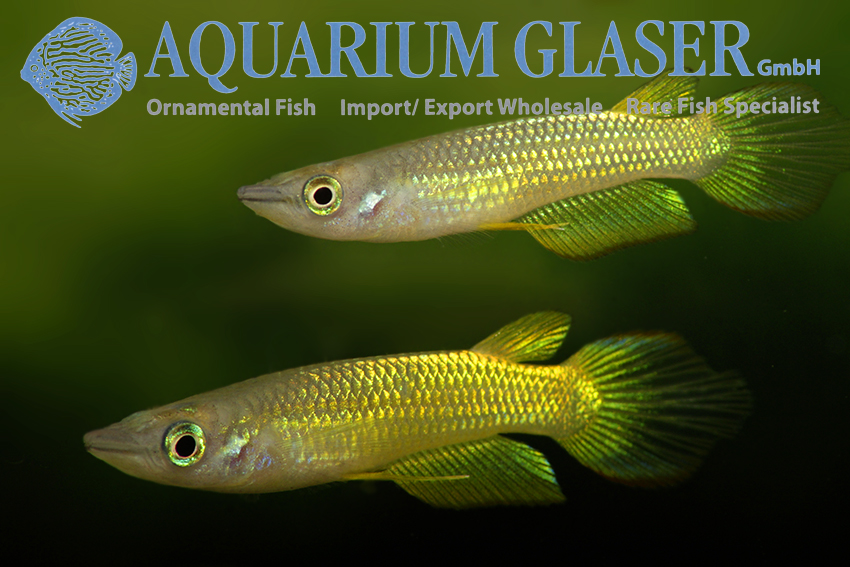 Aplocheilus lineatus is one of the few species of killifish that are well suited for a community tank. They can be properly fed with dried food and invigorate the upper part of the water column. However, one should keep in mind that A. lineatus can grow to a length of about 10 cm. Larger Striped Panchax feed also on small fish. So one should choose only fish larger than 5 cm as tankmates to avoid this. A. lineatus can live for many years in the aquarium. Like all species of that kind they are excellent jumpers. So the keeper has to ensure that the tank is perfectly covered.

For our customers: the fish have code 303611 on our stocklist. Please note that we exclusively supply the wholesale trade.