We have received an incredibly beautiful pair of wild caught Oscars from the Rio Tapajos. At least the male absolutely competes with the breeding form “Red Tiger Oskar” in color, but as we said, they are wild-caught!

For our customers: the animals have code 633427 on our stocklist. Please note that we only supply to wholesalers.

Of the seven scientifically described species of Astronotus, only two are currently recognized by most ichthyologists, namely A. crassipinnis and A. ocellatus; however, a third, A. zebra, is so distinctly different in color from the others that there is little doubt as to its validity. Now a new name has been established: the Oscar from the Orinoco drainage and the Gulf of Paria in northern South America has been scientifically described as A. mikoljii (Perez Lozano et al., 2022). All images in this post show Astronotus mikoljii at different age stages and local populations.

The differentiation of Oscar species is decidedly tricky and can only be accomplished with certainty using molecular biology methods (DNA analysis). However, the juvenile coloration of three of the now four species considered valid is very different. The “common” Oscar, A. ocellatus, is well known from pet shops. A. crassipinnis juveniles are very conspicuous yellow-black colored (“Bumble-Bee-Oskars”) and A. mikoljii is very colorful – we have already presented such Orinoco wild catches more often (https://www.aquariumglaser.de/en/fish-archives/astronotus_ocellatus_wild_colombia_en/    https://www.aquariumglaser.de/en/fish-archives/astronotus_ocellatus_wild_en/   https://www.aquariumglaser.de/en/fish-archives/astronotus-ocellatus-colombia/). Unfortunately no juvenile picture of A. zebra has been published yet – at least we don’t know any.

Besides A. mikoljii there are – according to molecular data – at least three more species of Oscars in South America, which are named Astronotus sp. “East”, A. sp. “Negro” and A. sp. “Jurua” in the work of Perez Lozano et al. In the case of these species, however, it must be carefully checked whether they have not been described before and are wrongly listed as synonym. However, the matter is not simple, because Oscars were and are brought within South America also again and again as food fish into areas, in which they were not native originally at all. In addition, this may have led to hybrids, which are also difficult to represent molecularly.

A. mikoljii was named after Ivan Mikolji, an avid artist, nature lover, and explorer of Venezuela and Colombia who is also an ornamental fish exporter. Mikolji’s Oscar, like all Astronotus species, usually grows to 25-30 cm in length and does not differ from the other species in terms of care and breeding.

Currently we import very pretty young Oscars from Brazil, which are offered under the name “Astronotus crassipinnis”. The species A. crassipinnis exists in Brazil, but there is no possibility to check if the species identification is correct. We suspect that the animals are bred ones.

The beautiful fish show the typical behaviour of all Astronotus children: they have a strong need to be with conspecifics. The conspicuous colouring of all young Oscars is in fact a camouflage. The animals form larger groups and swim so close together that they look like one big fish to a potential attacker.

The loss of the child’s pattern is indicated by the fact that the animals develop their typical eye spot on the tail root. From then on, the young Oscars begin to live rather individually (or in small groups). The eye spot is used to mislead attackers (who orient themselves by the eye of the victim when preying). Oscars from this size upwards prefer to eat small fish themselves, but in the aquarium they also take any other kind of strong food of carnivorous nature.

How these Oscars look like as adult fish, we do not know, therefore a safe scientific determination is not possible. However, it can be assumed with some certainty that this Astronotus species also grows to a length of about 25-30 cm. 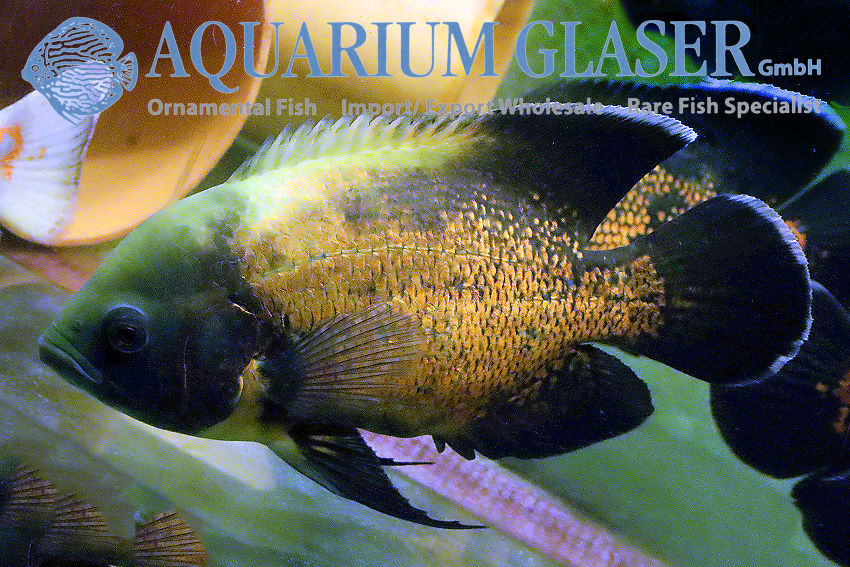 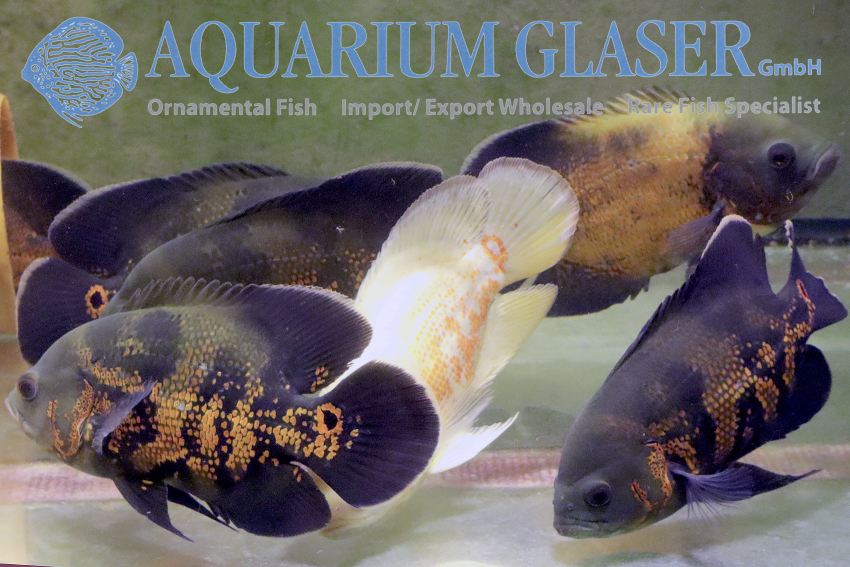 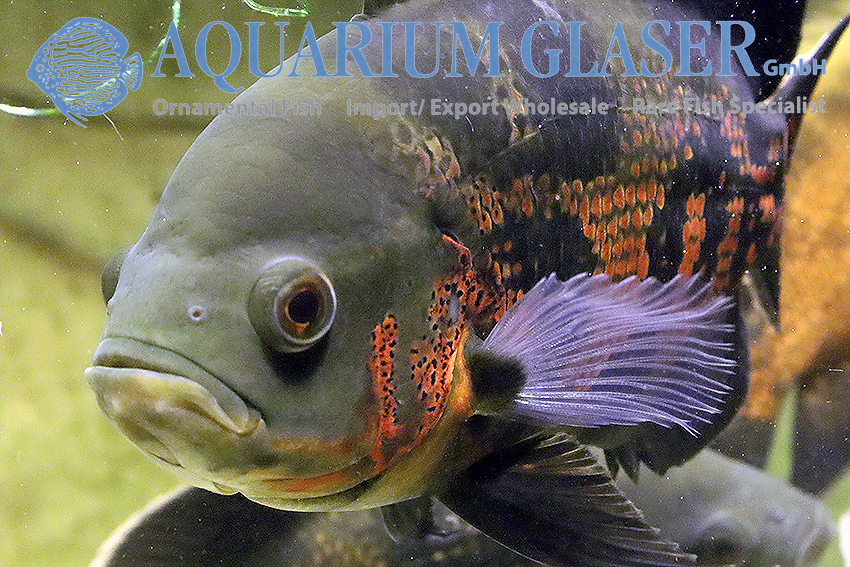 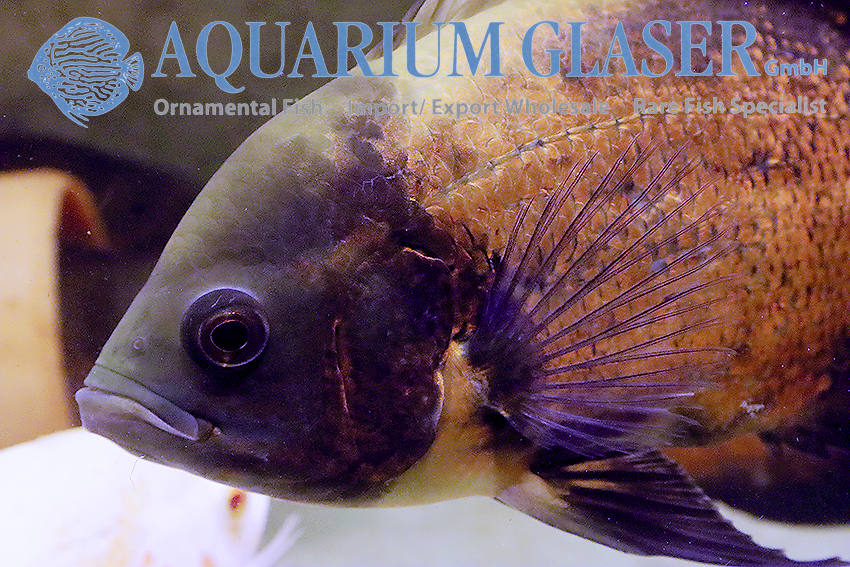 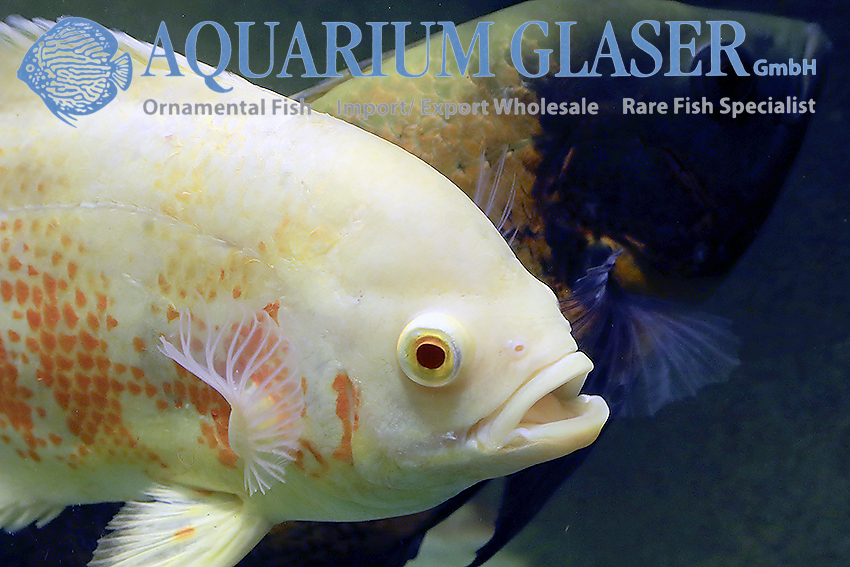 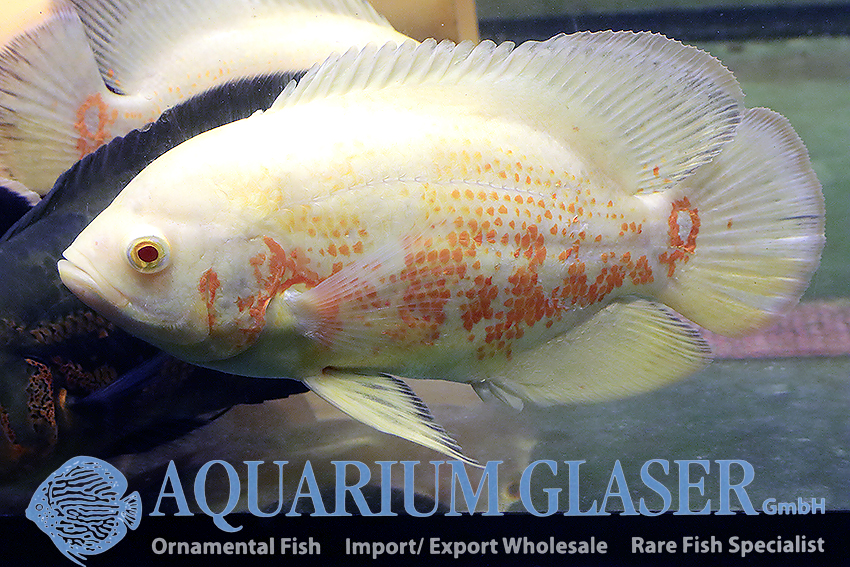 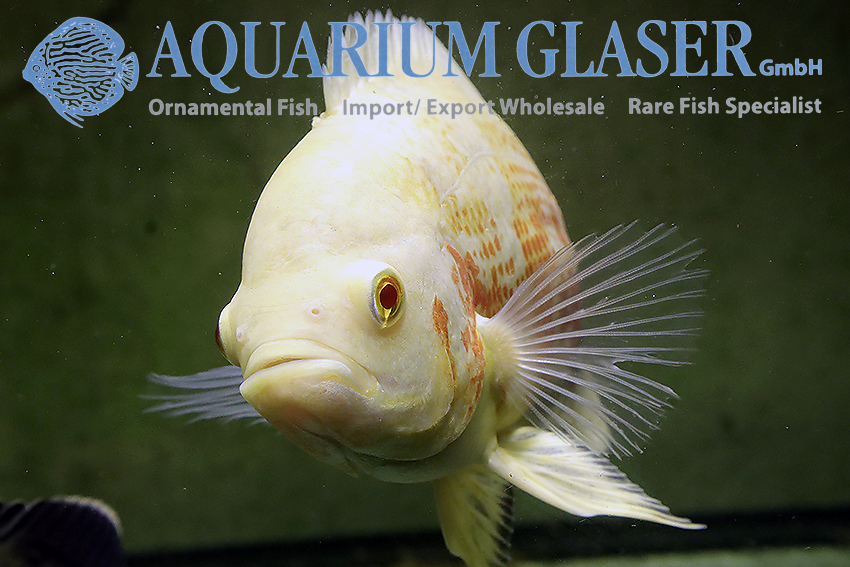 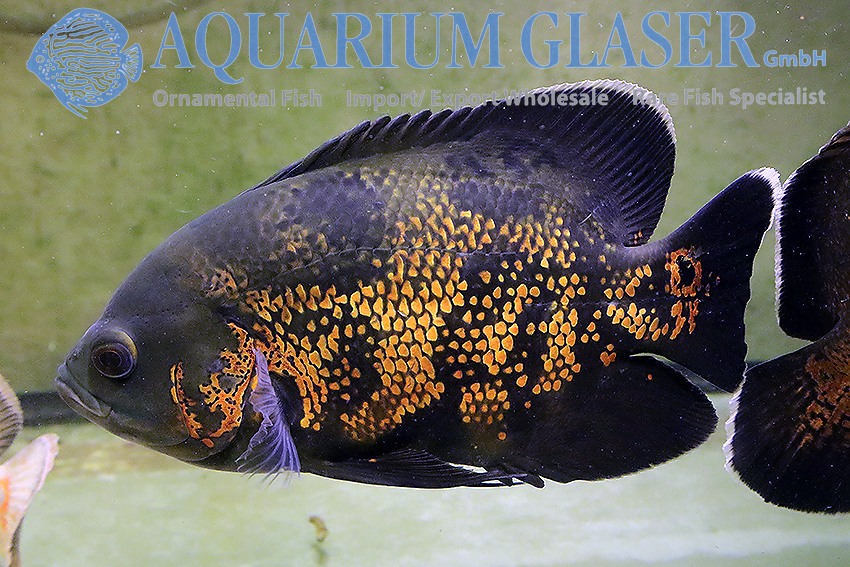 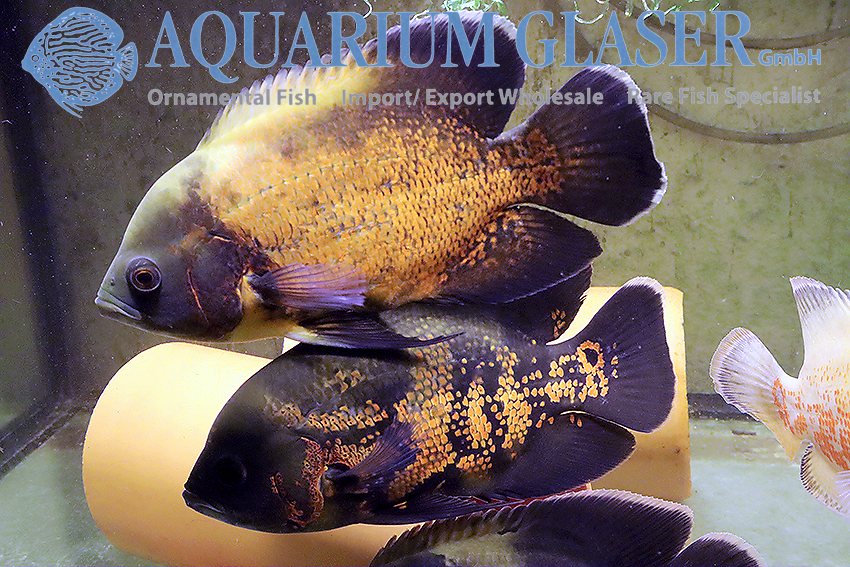 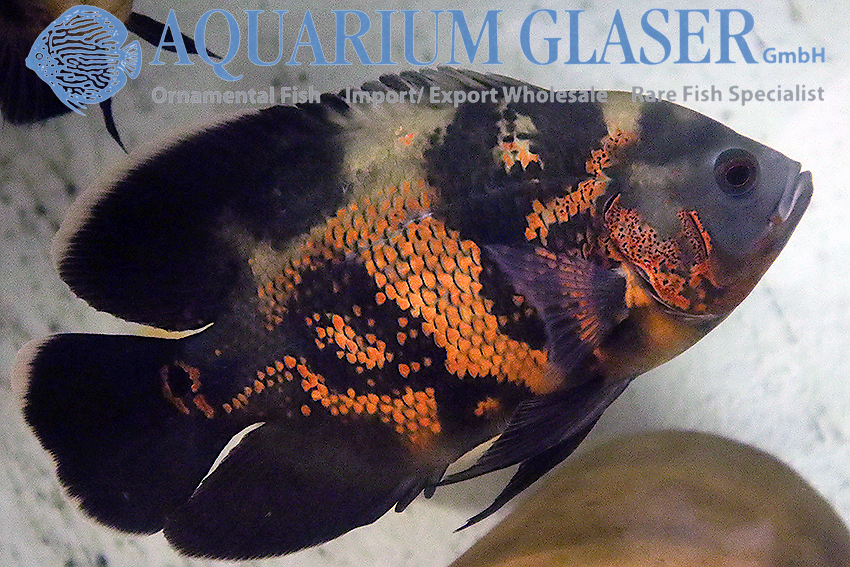 We obtained very nice juveniles of the Oscar from Colombia. In contrast to the adults the juveniles are strictly schooling fish. In case of a real or imaginary danger the fish school performs a kind of globe. This behaviour also explains the otherwise illogical attractive pattern. In a school this pattern works as a camouflage, comparable to the wear of militairs. 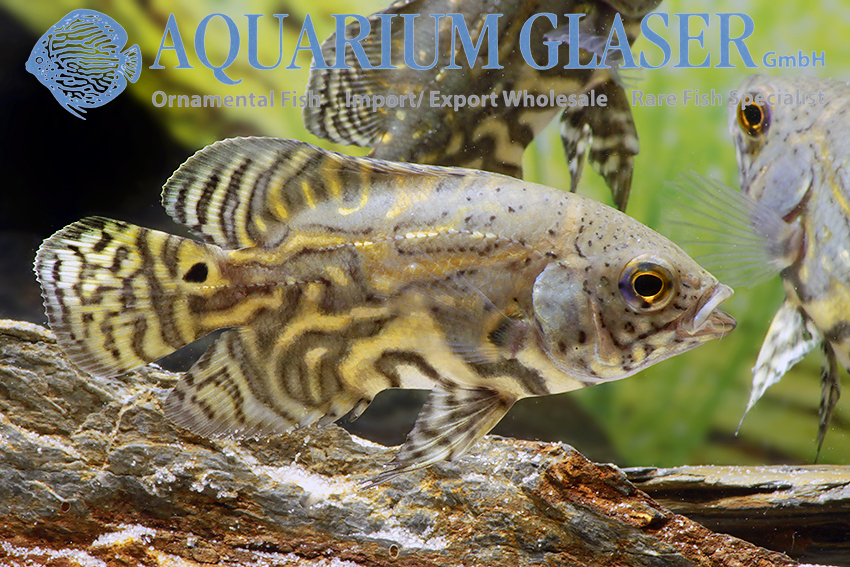 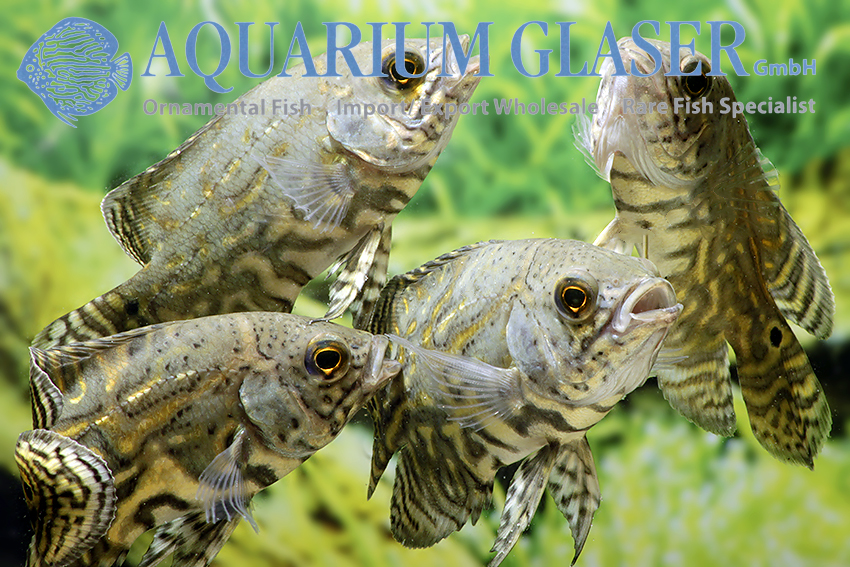 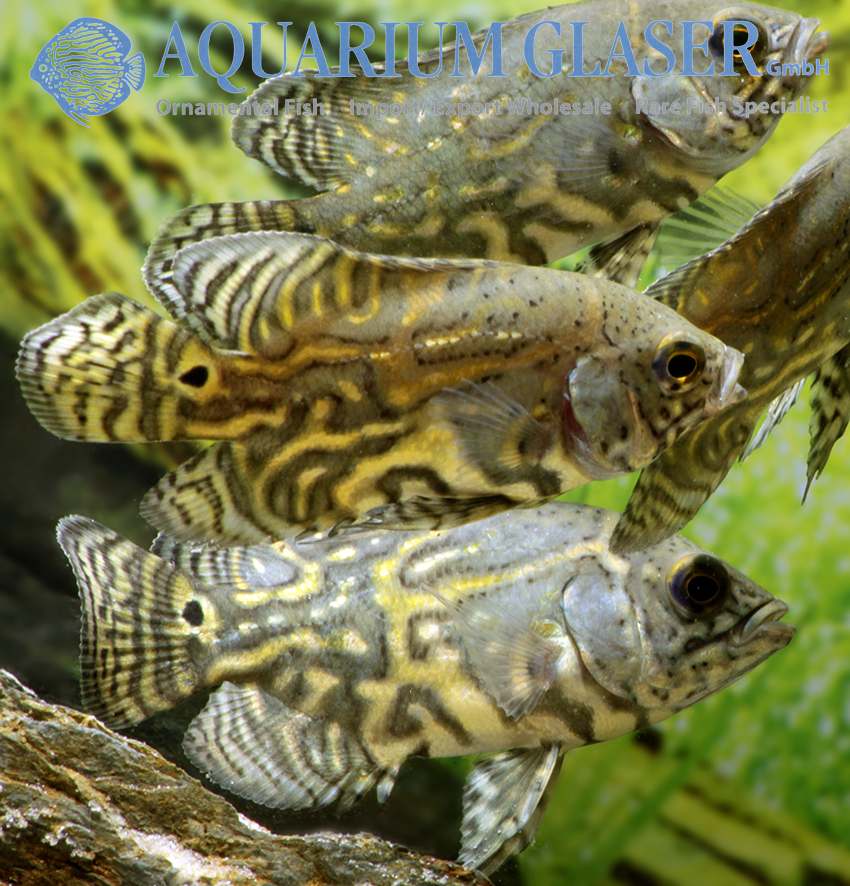 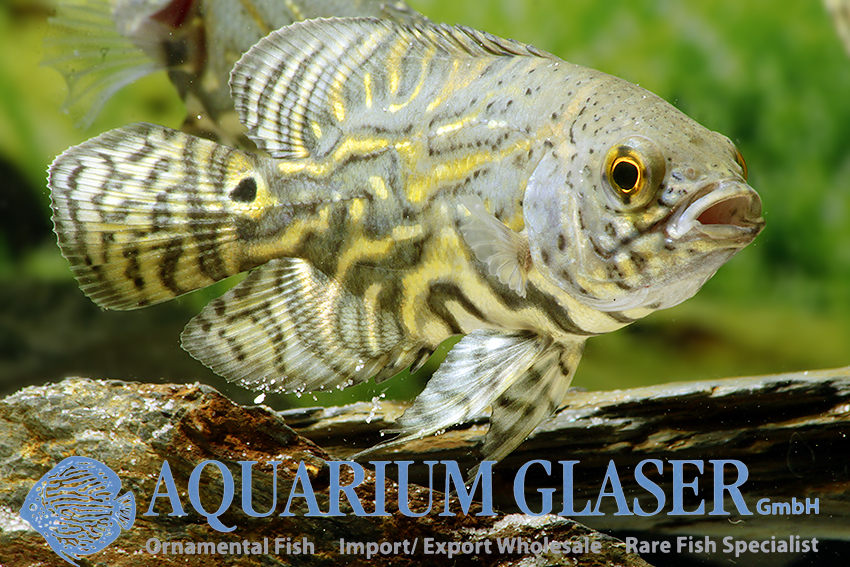 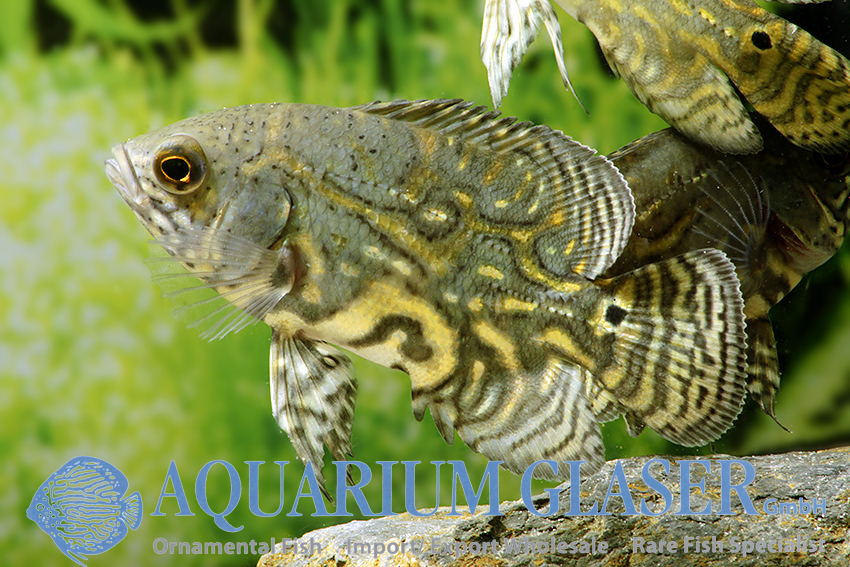 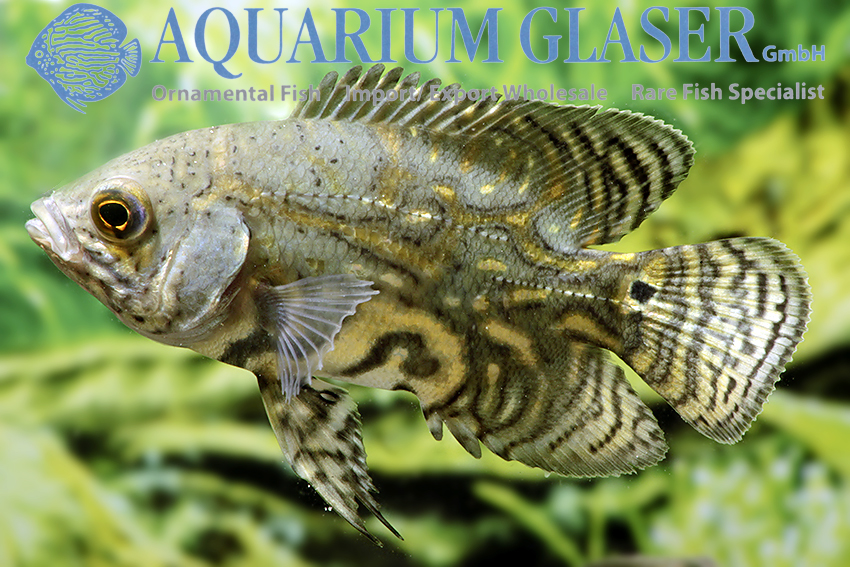 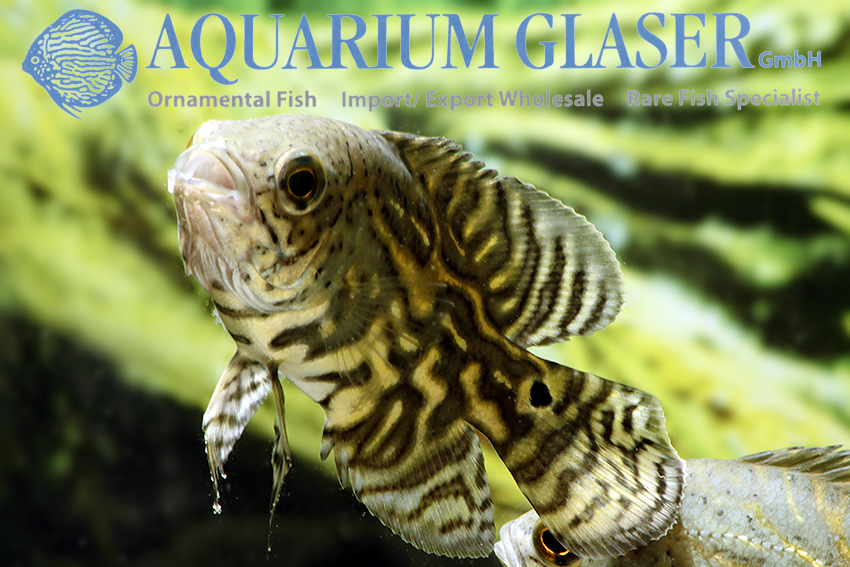 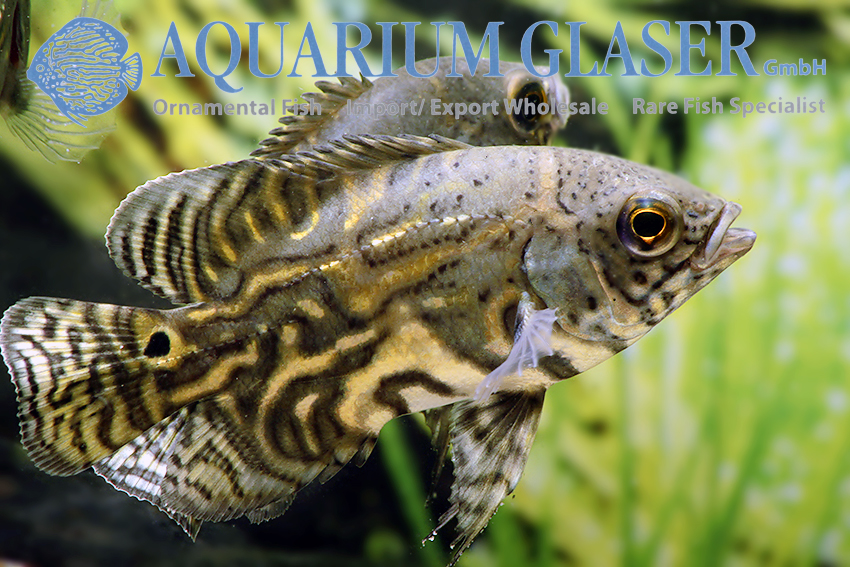 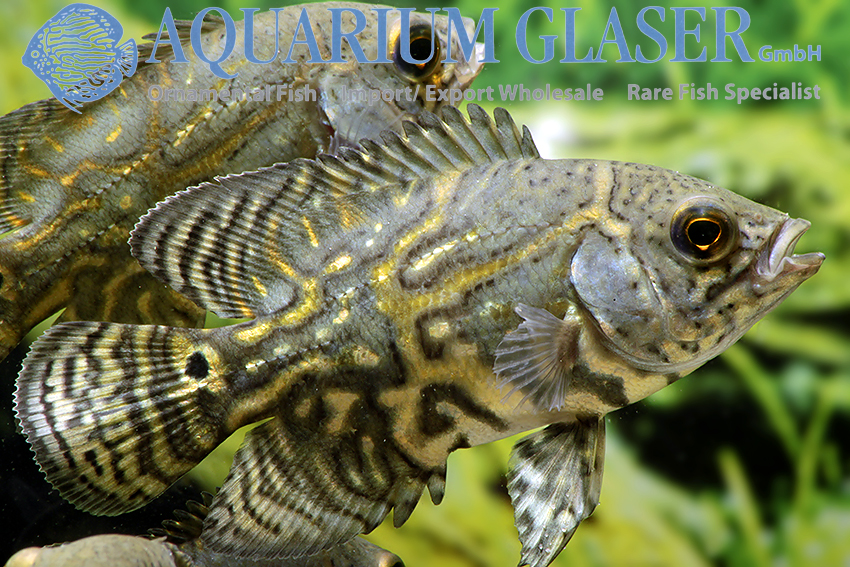 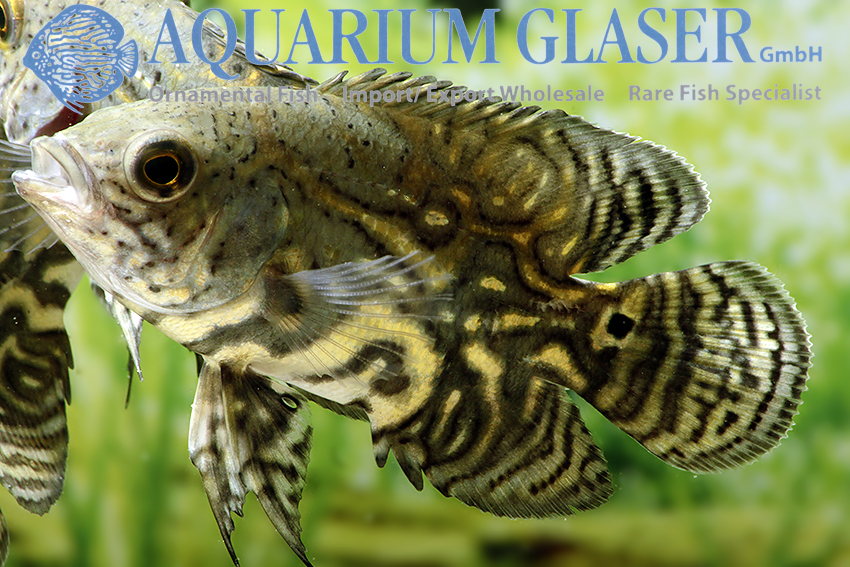 However, one should not be fooled by the large innocent looking eyes of these fish, which are, by the way, real personalities. Oscars are predators and 5-6 cm long ones will readily take a guppy as snack. So the oscar is suited for community tanks only under certain circumstances. Tankmates must be large enough that they are not taken for food. In case this preference is fulfilled the oscar is on its best behaviour. Compared with other large species of cichlid, members of the genus Astronotus are rather peaceful creatures.