It is and remains the oldest ornamental fish in the world: the goldfish (Carassius auratus) and its many cultivated forms. It has been propagated and kept by humans for about 1,000 years.

Many consider goldfish to be garden pond fish, especially the varieties with “nomal”, wild fish-like body types. This is quite true, and they do grow into huge (over 20 cm, sometimes up to 30 cm long), magnificent specimens in the pond. But there is a reason why the goldfish has been in culture for so long: the wild form is also one of the most adaptable fish in nature. The temperature range can be between 0 (!) and over 30°C, the fish can also tolerate temporary oxygen deficiency due to special physiological adaptation mechanisms and if in nature the water is only small and the food supply is low, it only grows to 5-8 cm in length and also reproduces at this size. That is why all goldfish forms can be excellently kept in the aquarium. However, our western understanding of animal husbandry is not so much to push the genetic limits of what is possible; we prefer to keep animals as “optimally” as possible, i.e. under the conditions that are subjectively most comfortable for the animals.

The Shubunkin belongs to the large-growing goldfishes and therefore should be kept in large aquariums (from 150 cm). It is a five-colored breeding form, in which blue, red, orange, white and black colors can be found in highly variable proportions. Five-colored goldfish are also called calico goldfish in Japan (calico is actually a special cotton fabric, which was colorfully printed in Japan). Usually shubunkin are sorted by the primary colors of blue and red, but this need not be the case. Pure goldfish breeding forms, where one animal looks like the other, do not exist, because the genes for fin length and body colors are located on several alleles. Many prefer the shubunkin as a comet (i.e. with elongated fins), but in the same brood normal-finned siblings can also occur. Because of the complex inheritance relationships, each Shubunkin is unique.

The Shubunkin is a relatively young breeding form, which was “only” created in 1892 by the Japanese breeder Yoshigoro Akiyama I by crossing calico dragon eyes (“Telskop-Eyes„), common goldfish and wakin with a single tail fin. Shubunkin were first introduced to the public in 1902. The name “Shubunkin” was coined by Shinosuke Matsubara, whom the bright colors reminded of a kimono.

For our customers: we have shubunkin in several sizes on sale all year round. They have depending on size, code 811000-811007 on our stock list. Please note that we supply only wholesale.

One of the earliest fin changes to occur in goldfish is a doubling of the caudal fin, a mutation that occurs exclusively in the species „goldfish“. Simple goldfish with a double caudal fin are called Wakin.

The red-and-white fish is one of the most common and most beautiful colour variations of the goldfish. One calls red-white-colored animals Sarasa. The Sarasa-Wakin is also called Wakin Hoe Kim.

Wakin goldfish are also completely winter hardy here. One must consider however that the animals are bred in tropical Asia and are used to higher water temperatures (18-24°C). Therefore, they should be kept indoors until the water temperature in the pond is permanently above 16°C, unless the pond is heatable. In the autumn, the fish kept during the warm season in the pond will get used to the gradually sinking temperatures without any problems.

Wakin goldfish, just like the basic form, usually grow to 15-20 cm long, with a maximum length of approx. 30 cm.

For our customers: the animals have code 808702 on our stocklist. Please note that we only supply wholesalers.

In the minds of many keepers the goldfish is a coldwater fish and has its high season in spring time, when the garden pond season starts. This is of course true, but reflects only a part of the reality. The highly developed sports – like the orandas – often are better kept in aquaria than in outdoor ponds. The optimal water temperature for these fish is between 14 and 28°C. 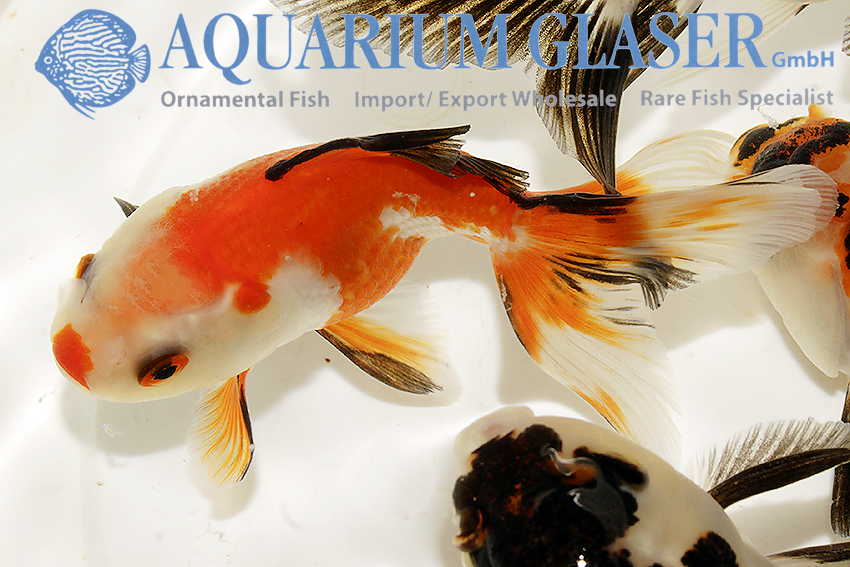 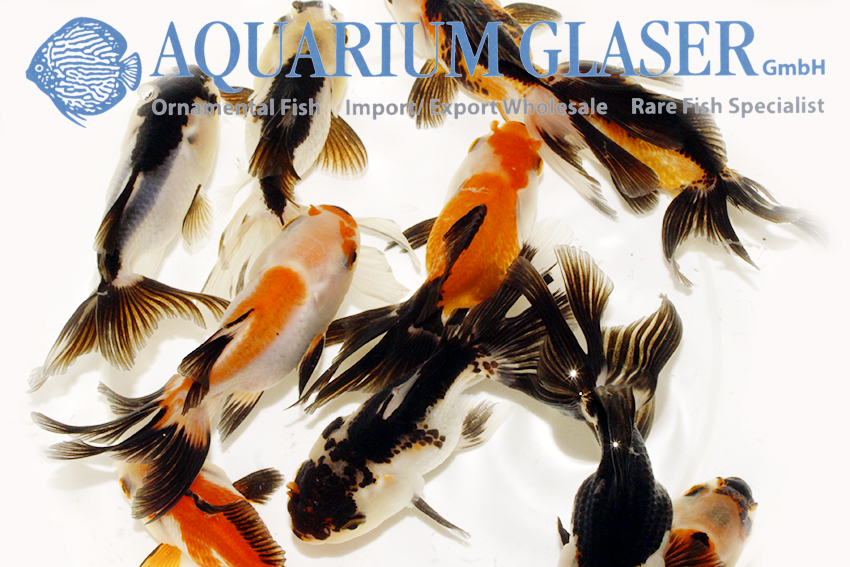 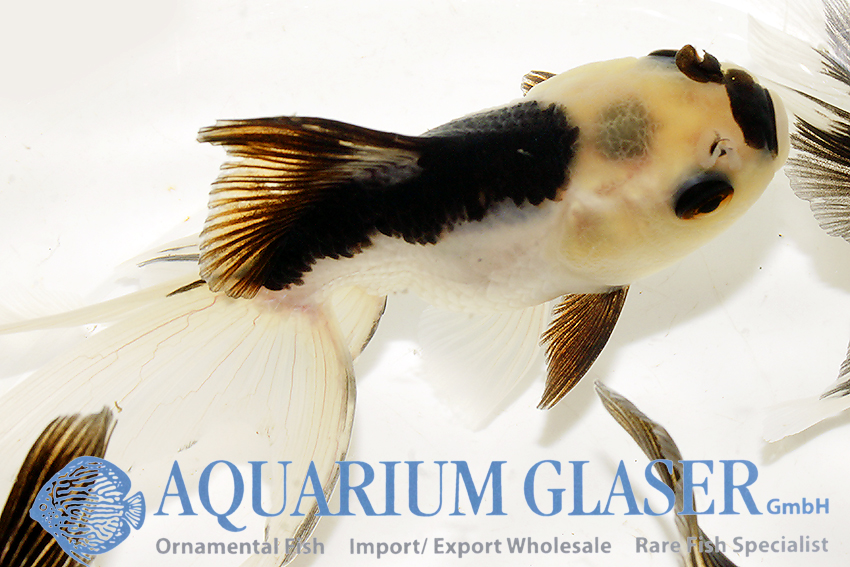 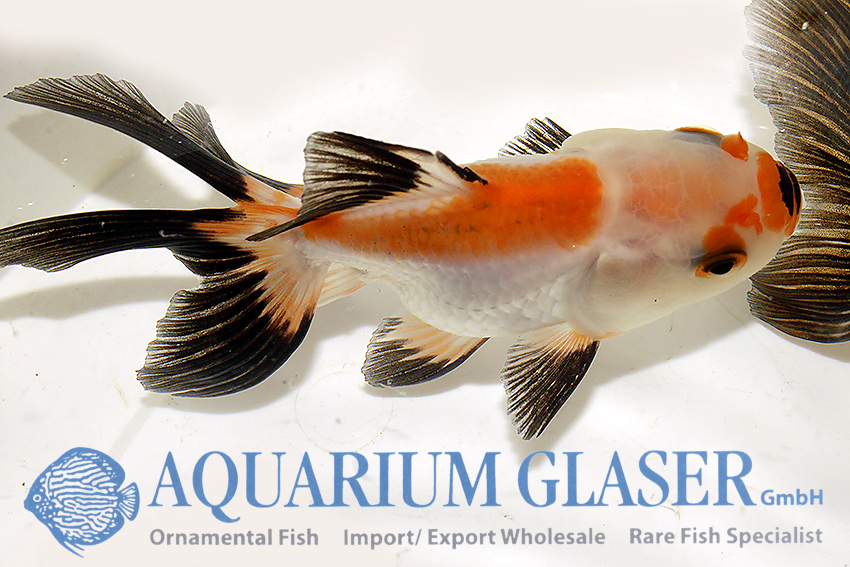 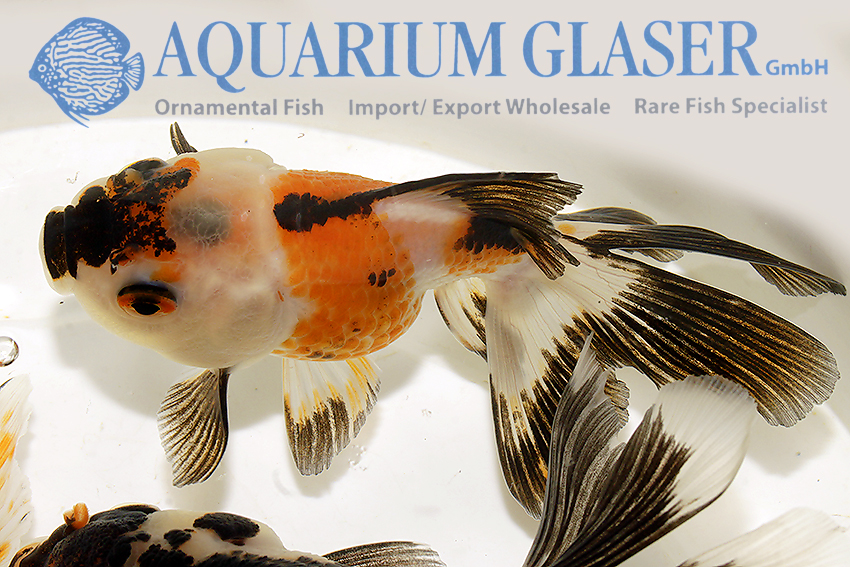 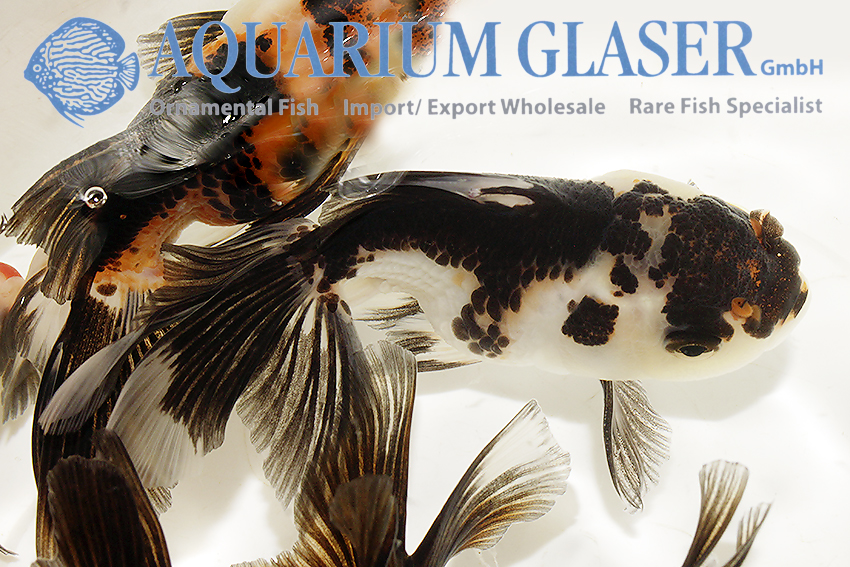 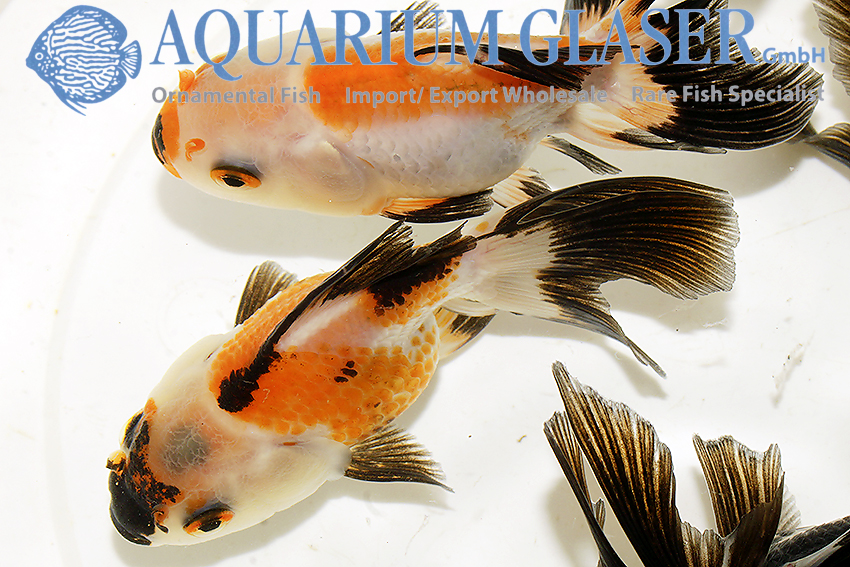 Currently we received very nice Oranda 2-3 Colour that were bred in Singapore. These animals are colored individually very different and in all probability they will also change some of their colours during their individual lifetime, which can be as long as 30 years.

The ideal home for such fish is a large tank with soft sand and only a mild current. Goldfish are social animals and absolutely peaceful against all tankmates. One must only take care that no other fish takes the long fins of the orandas as toys and thus jars on the nerves of the poor goldfish permanently. By the way: all goldfish – and so also all orandas – are a perfect weapon against duckweed. No plague of duckweed will ever appear in a goldfish tank, for duckweed is one of the favourite dishes of goldfish.

For our customers: the animals have code 815704 on our stocklist. Please note that we exclusively supply the wholesale trade.

If one listens to the breeders the black and white goldfish are called „magpie goldfish“, animals with telescope eyes ae called „demekin“ and the fish with a double, but compartively small tailfin are „fantails“. An oranda, on the other hand, is a hooded fish in the language of the breeders. But honestly: who would call this nice pandas we obtained recently „magpy demekin with fantail“? Oranda panda sounds much better, doesn´t it? 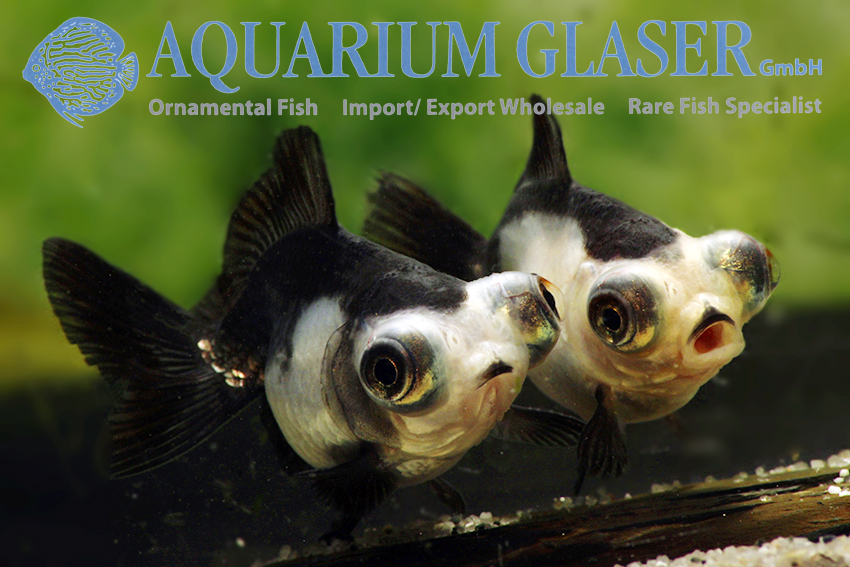 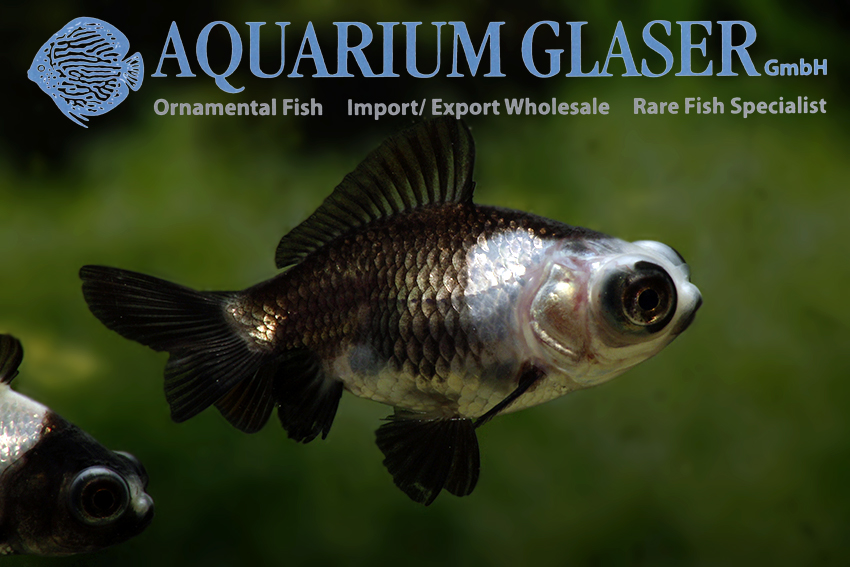 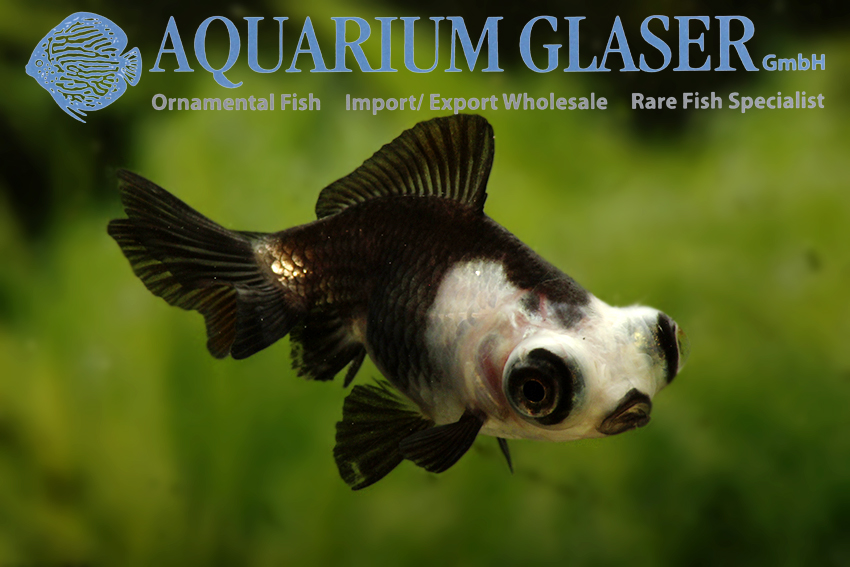 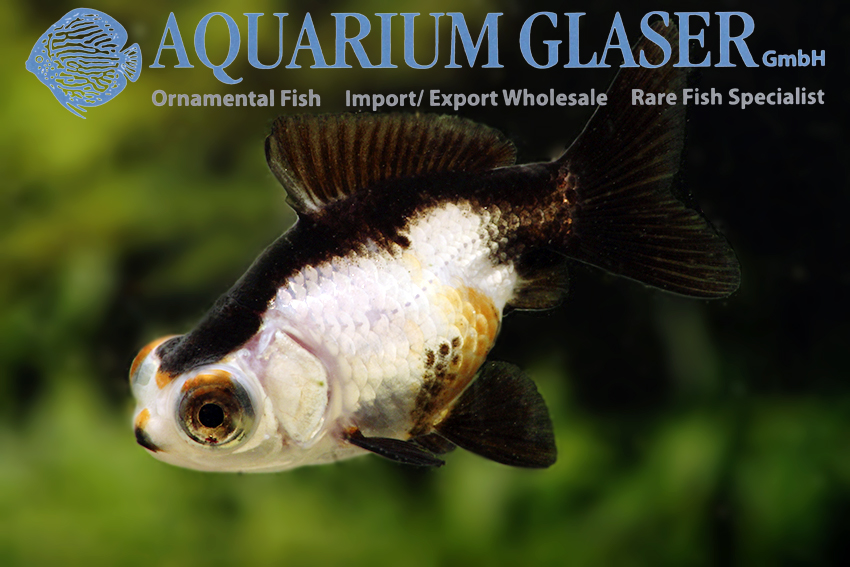 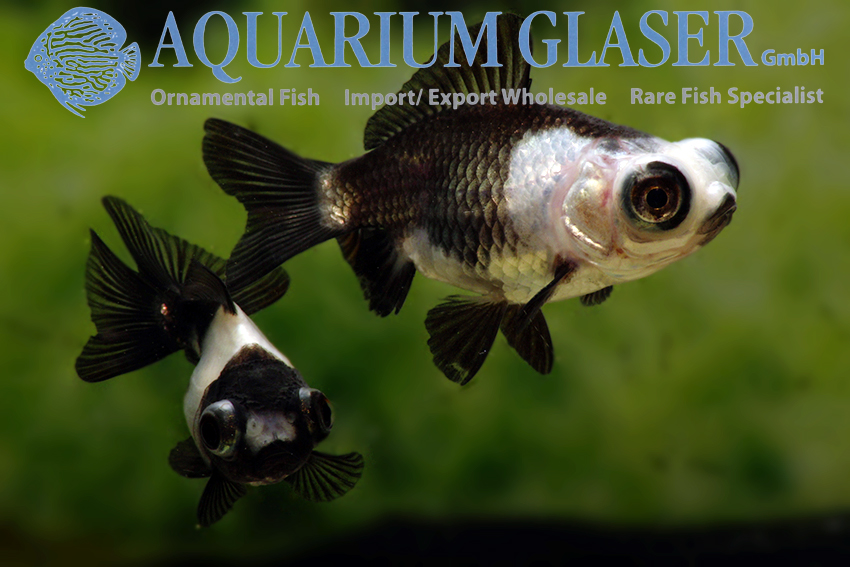 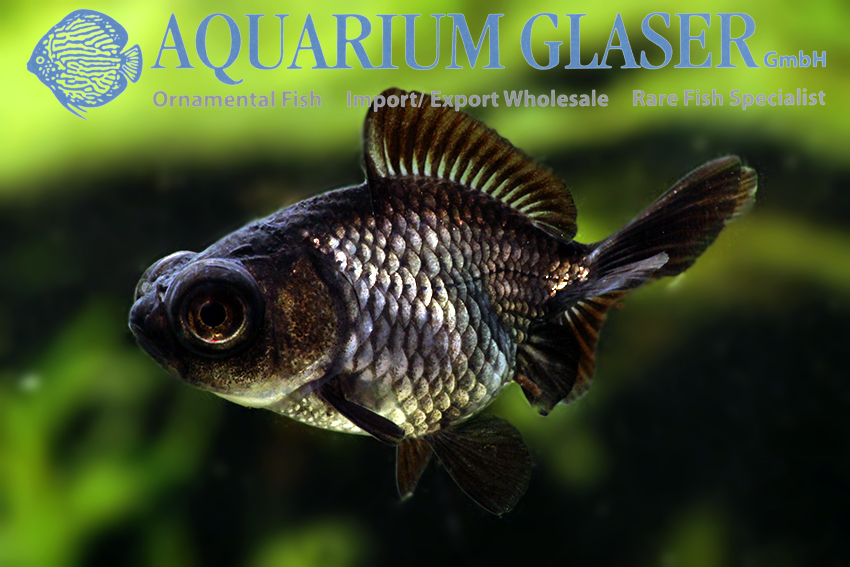 This sports isn´t easy to breed. We have only one supplier on a regular basis and even he cannot satisfy all needs anytime. Each individual fish looks a bit different. There are even specimens in which the white part of the coloration is missing. In that case the fish look similar to the Black Moor (a black demekin variety), but nevertheless different.