Because of its bright yellow fins Corydoras melanotaenia surely belongs to the most beautiful armored catfishes at all. It is, so to speak, the long snout to the bronze cory type, which can be found throughout South America. In contrast to its ubiquitous cousin, C. melanotaenia is an endemic of Colombia, i.e. it occurs exclusively there.

This Corydoras grows to about 5 cm and has all the positive characteristics that make Corydoras so popular in the aquarium: a lively and completely peaceful nature and uncomplicated keeping.

For our customers: C. melanotaenia has code 235503 on our stock list. Please note that we supply exclusively to wholesalers.

The Diamond Rainbowfish – Melanotaenia praecox – is one of the smallest species of the actual rainbowfishes and grows only 6-7 cm long. It shows already from 3 cm length its splendid iridescent body coloration. That is why it is one of the most popular species in the trade. With age the males become high-backed and then the red in the vertical fins develops even more intensively.

Since Melanotaenia praecox is only found on the island of New Guinea and there only in a small area in the western half of the island called Irian Jaya, all Diamond Rainbowfishes in the trade are descended from a few animals. Carelessly raised animals are susceptible to disease, well raised ones are not.

For our customers: the animals have code 428601 on our stock list. Please note that we only supply wholesale.

The blue-red Boesemans rainbow fish has not disappeared from the aquariums since its aquaristic discovery in 1981. For a time, it was so sought after that it was caught on a massive scale for export; these animals went almost exclusively to Japan, where were paid insane sums for them. There were even fears of overfishing of the animals, which occurre only in a very small area, and therefore an export ban was imposed. All animals on the market are bred ones for decades, so overfishing of the natural stocks has long ceased. 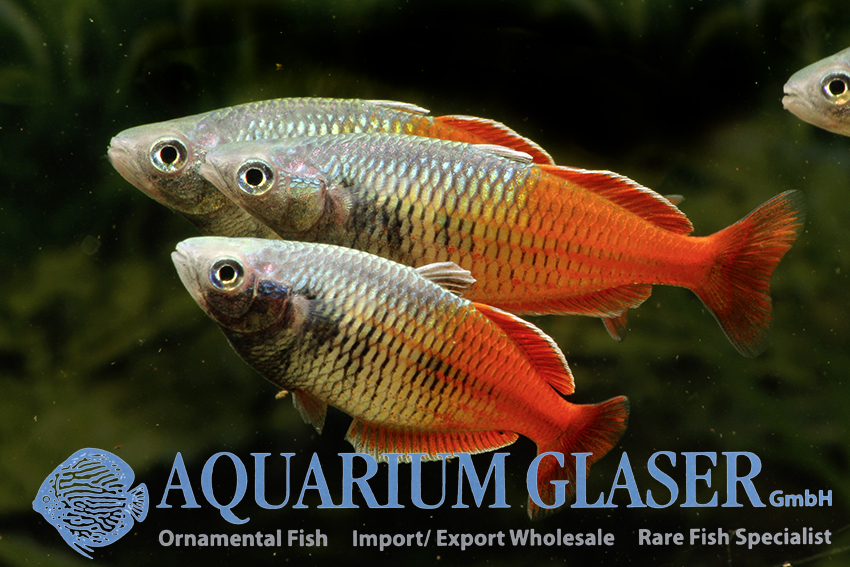 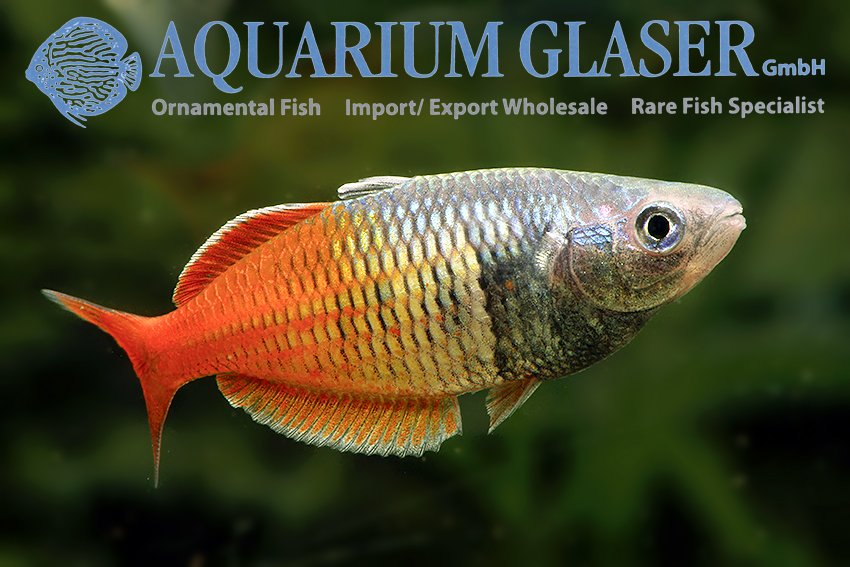 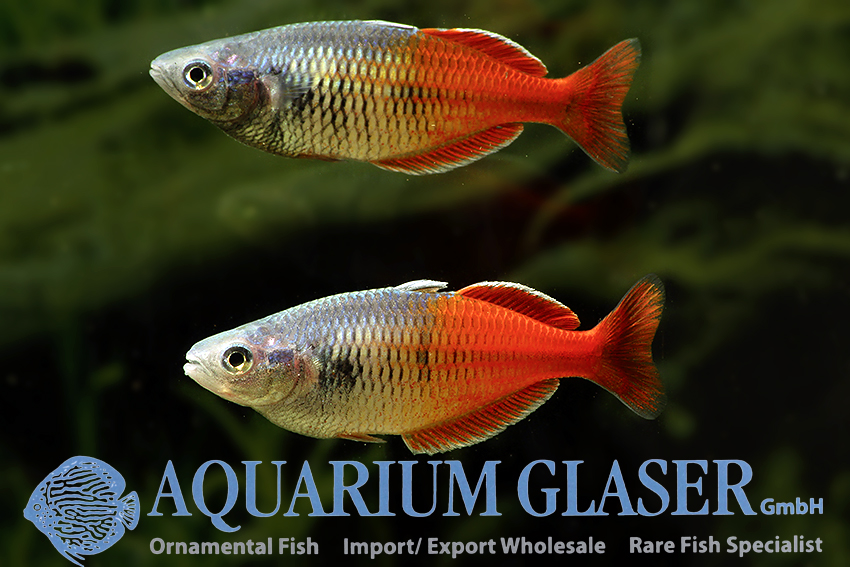 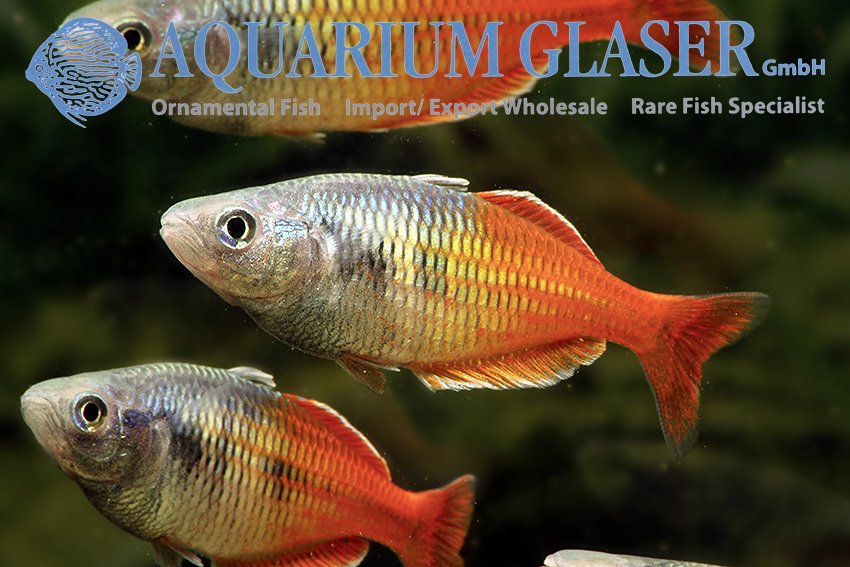 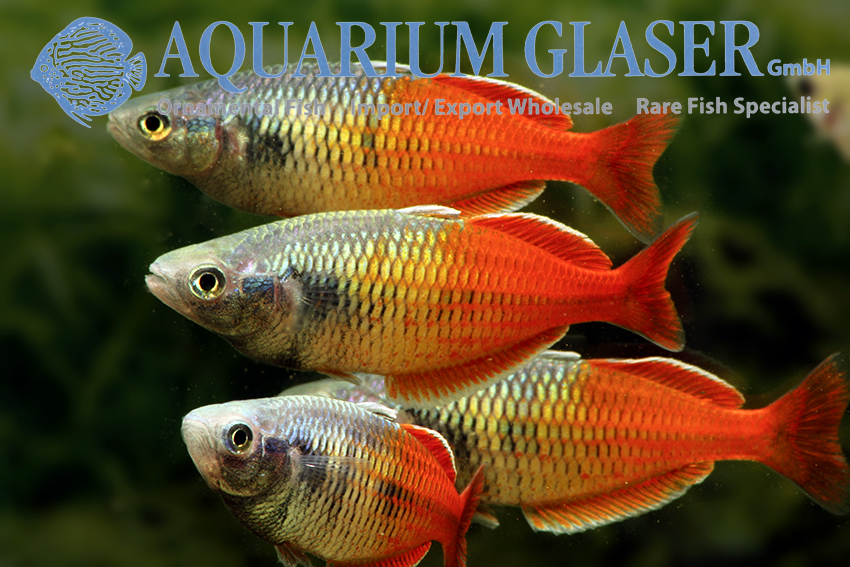 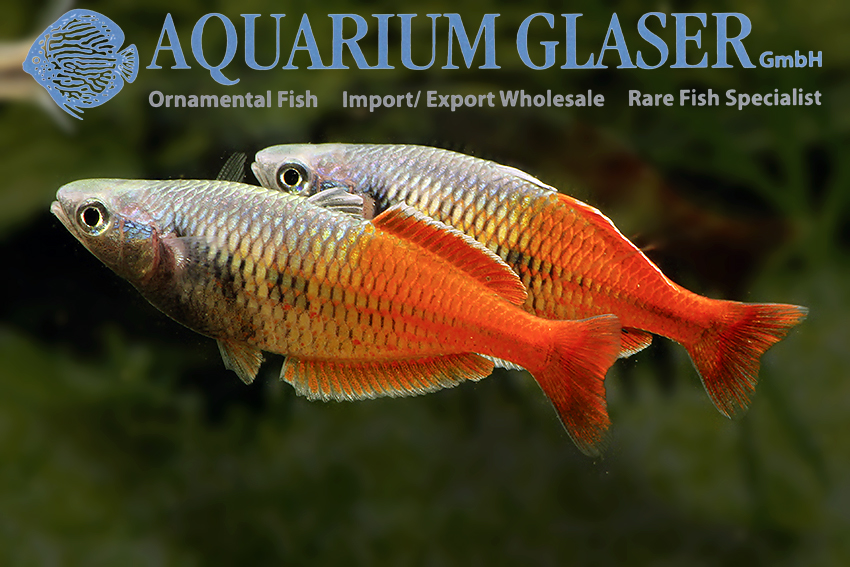 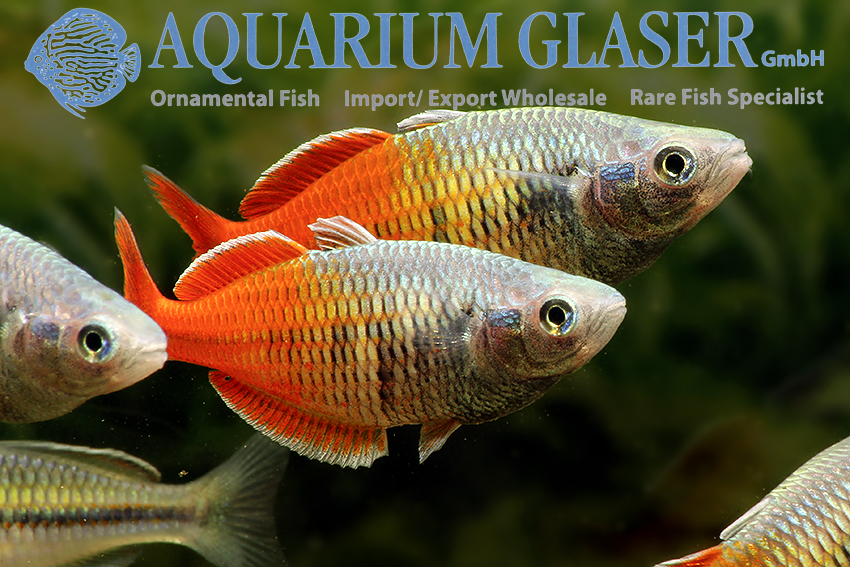 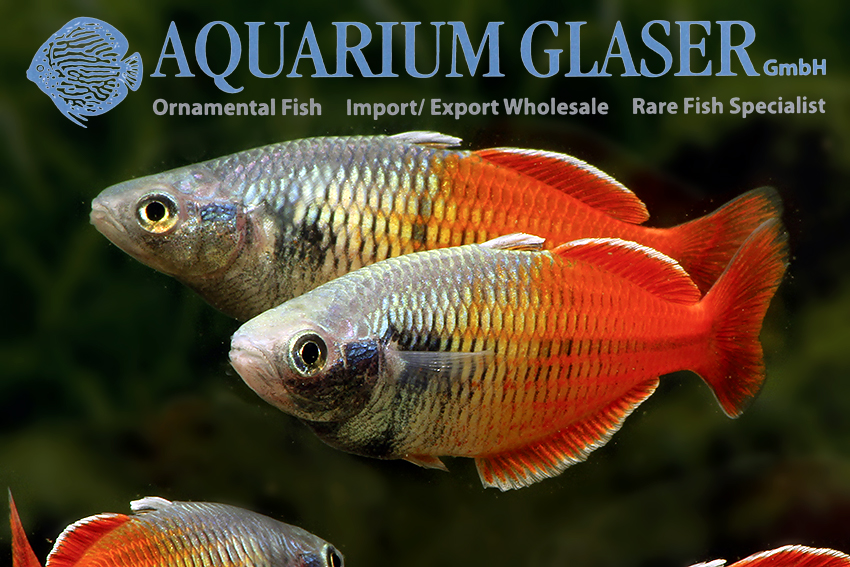 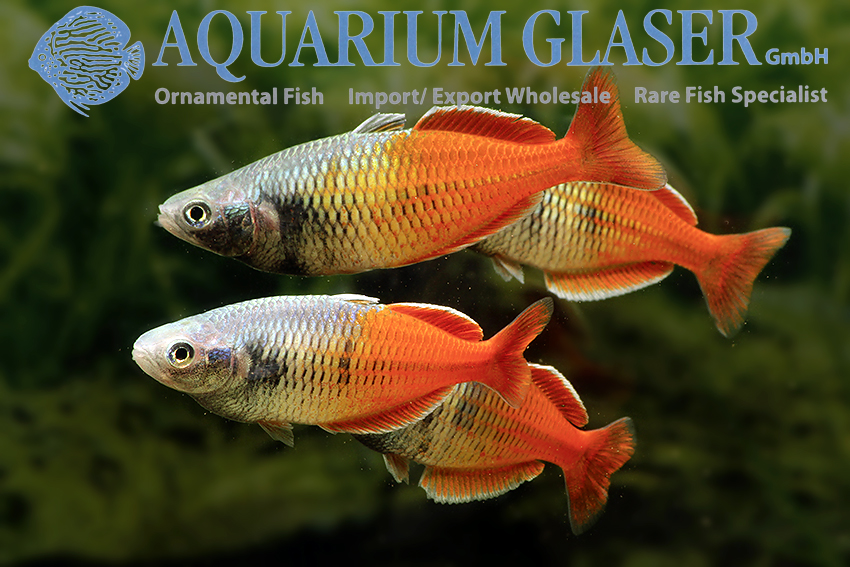 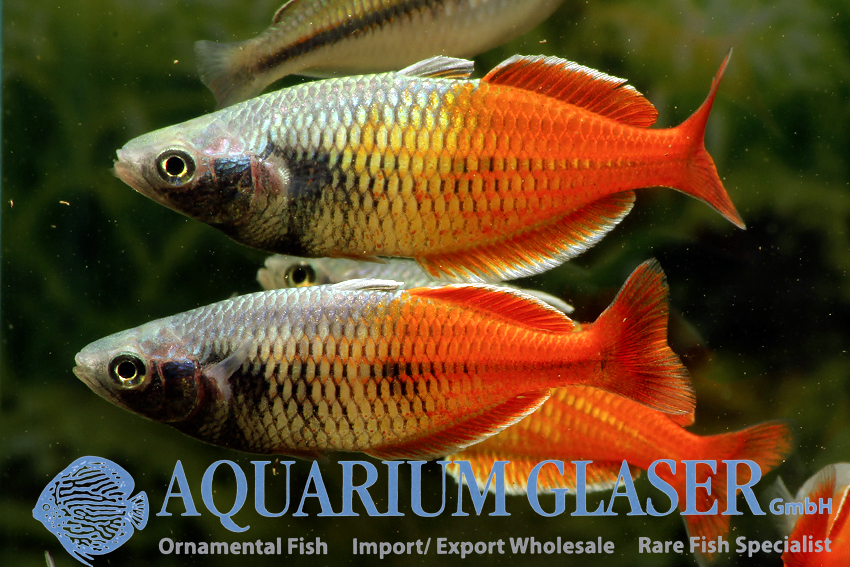 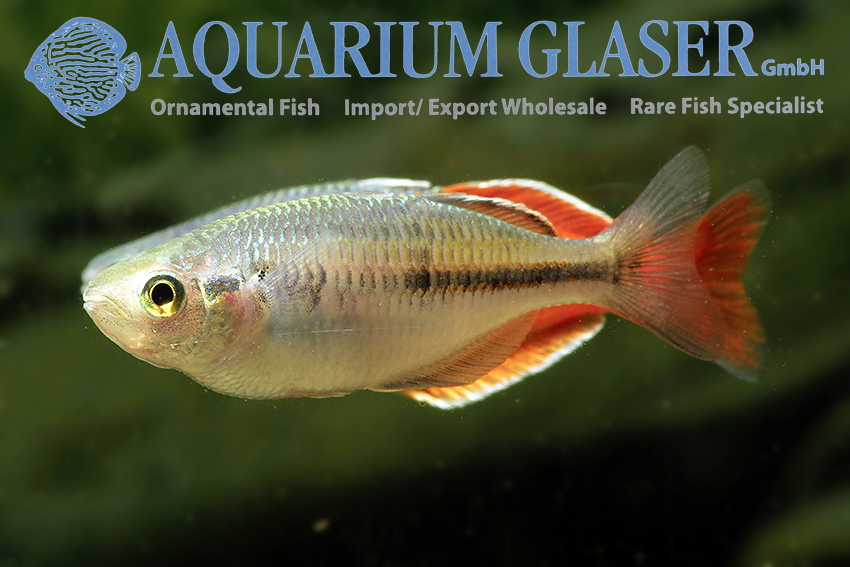 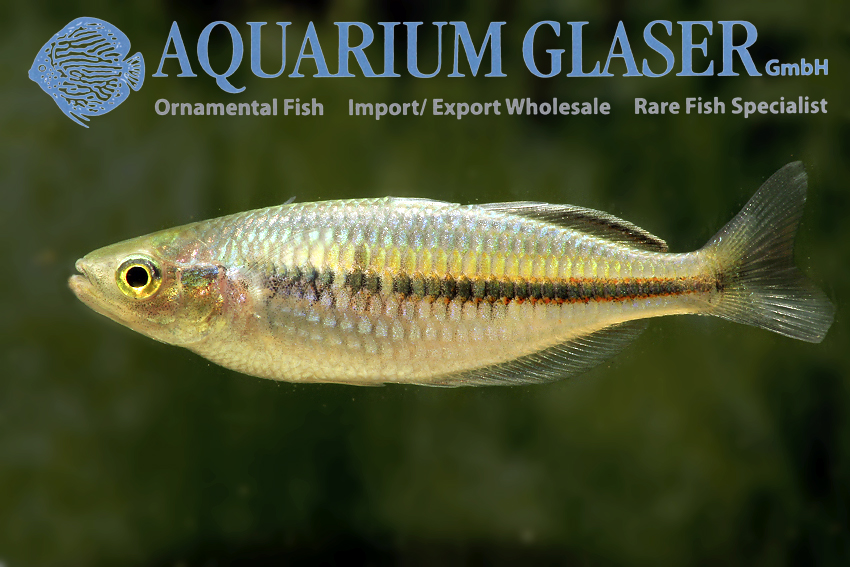 Melanotaenia boesemani Red is a breeding selection that does not occur in the wild. They are beautifully coloured fish and the perfect starter species for everyone who wants to try rainbow fish for the first time, because neither the care nor the breeding are difficult. However one should consider that these fish are very long-lived and easily reach 10-12 cm, also 15 cm are probably possible. One should therefore have sufficiently large aquariums (from 120 cm edge length) available for them, because in too small aquariums they cannot live out themselves properly.

For our customers: the animals have code 427313 on our stocklist. Please note that we only supply wholesalers.

One of the species of rainbowfishes with the longest aqurium history is the dwarf rainbowfish, Melanotaenia maccullochi. It reached Europe as early as 1934 and is kept and bred since then. However, if we order nowadays M. maccullochi from Indonesia we do not get this species, but another one which has only a rough similarity with M. maccullochi: M. australis. M. australis has been considered to be a subspecies of M. splendida for a long time. It is distributed in northern Australia. The variety with the pretty red fins that is spread in the hobby currently looks most similar to the form from the Sale River in the Kimberly region, state of Western Austalia. We can offer this species both as imports from Indonesia (bred fish) as well as German bred ones. It attains a maximum length of about 11 cm. 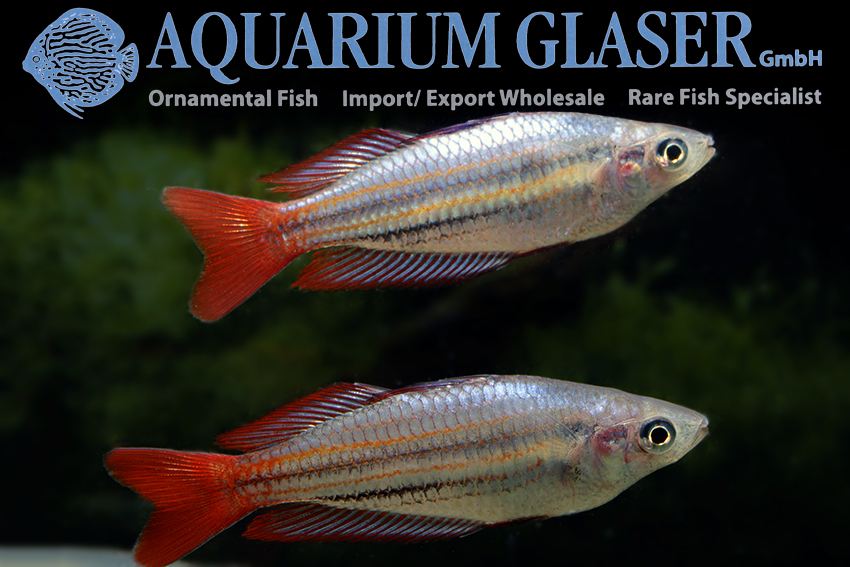 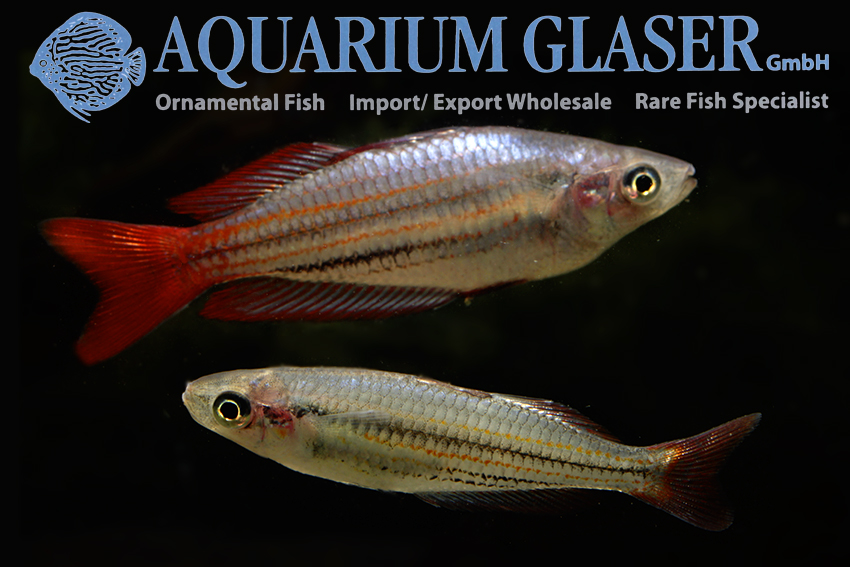 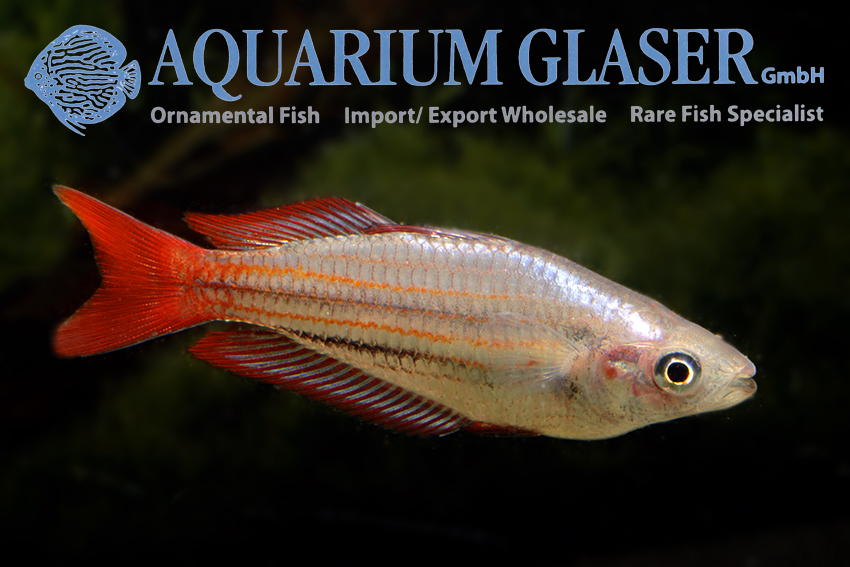 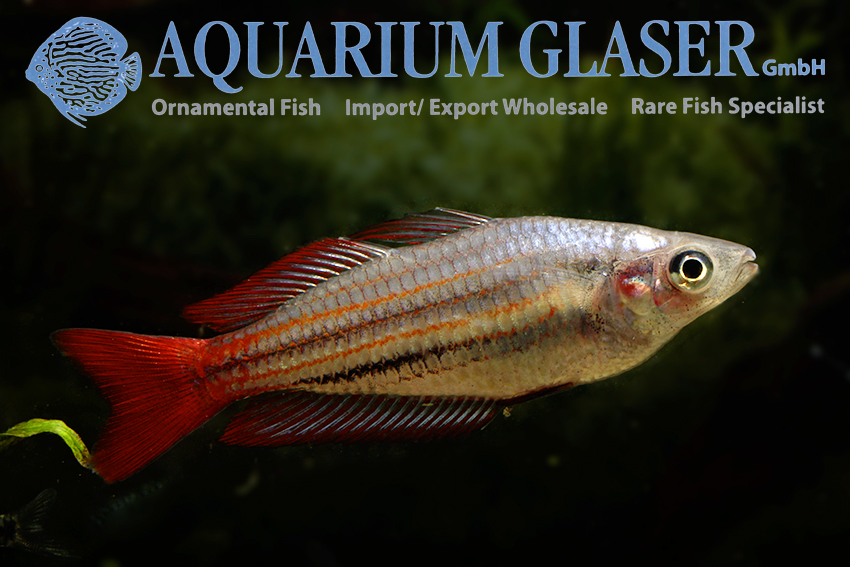 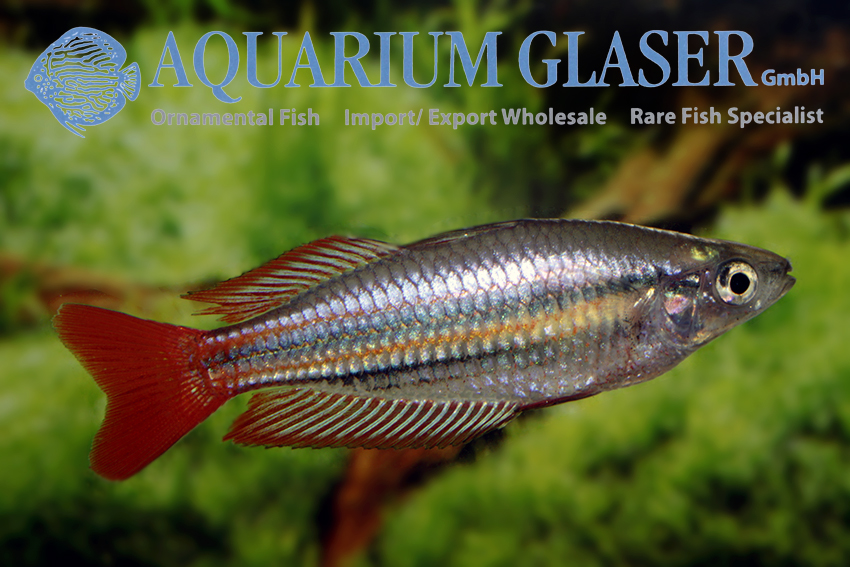 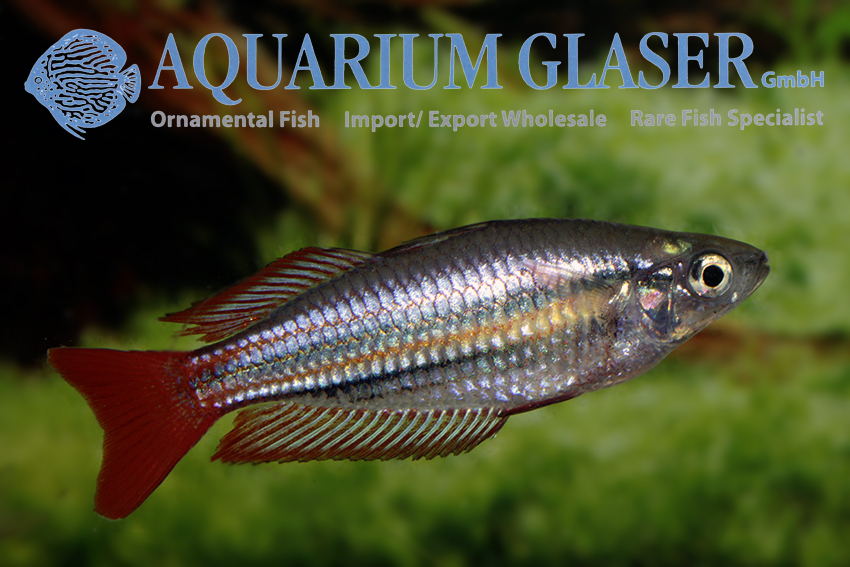 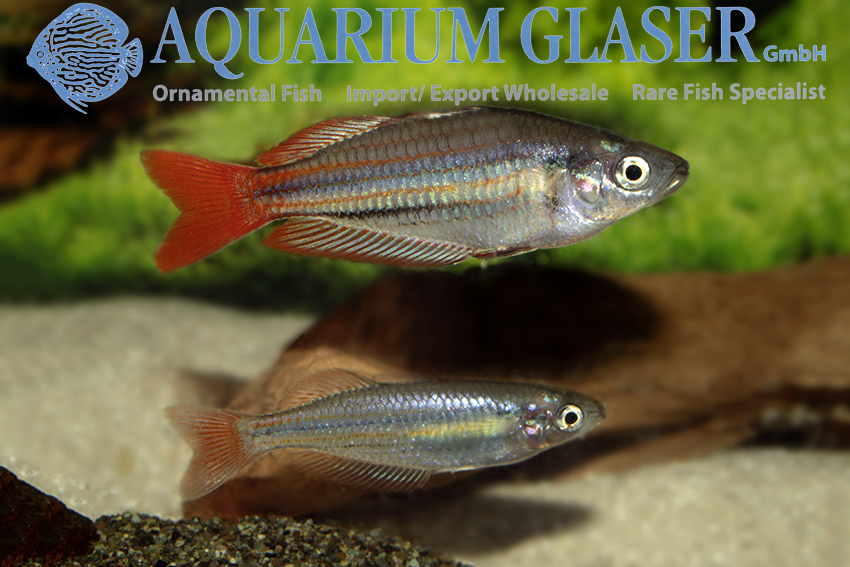 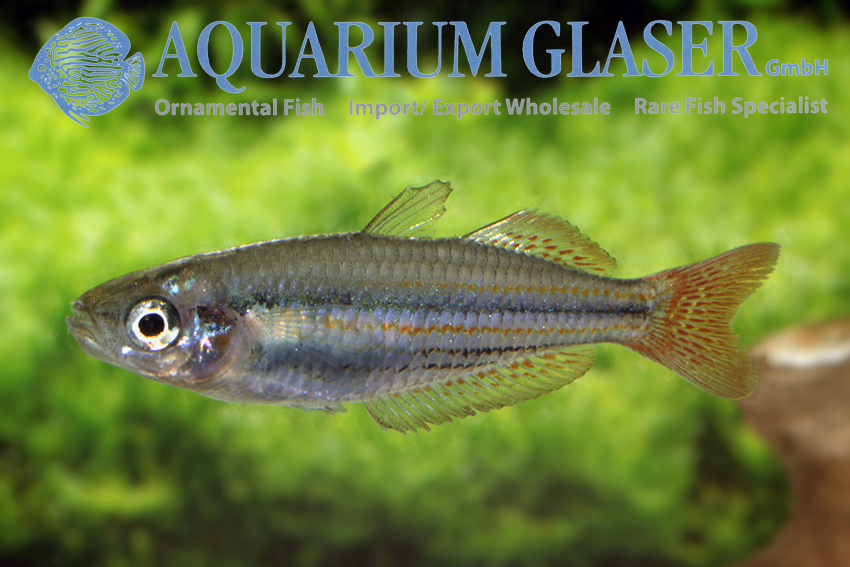 For our customers: the fish have code 427104 and 427123 (selective bred „Super Red“) on our stocklist. Please note that we exclusively supply the wholesale trade.