The Indian Dwarf Mudskipper, Periophthalmus novemradiatus, is the ideal aquarium mudskipper with its usually 6 cm length (in literature up to 10 cm are given, but we have never seen such large specimens, probably this statement is based on confusion with other species). In addition to its small size, it has many other favorable attributes: it is much more peaceful than most other mudskippers, it is not very shy, and it is hardly susceptible to disease. As with most mudskippers, males can be easily distinguished from females by dorsal fin size. In males, the first dorsal-fin ray is elongate, the fin itself is larger and more colorful, and, when attached, extends well past the base of the second dorsal fin; in females, the attached first dorsal fin ends before the base of the second.

Periophthalmus novemradiatus is a coastal dweller – our specimens come from Bengal in India – and feeds on organic debris, small animals and algae left on the muddy bottom at low tide. It is, like all mudskippers, capable of living in pure freshwater and pure seawater. In practice, maintenance in brackish water (5-15 g sea salt/l) has proven best. Basically, the pH should not fall below 7. Water temperatures should be kept in the range of 20-28°C, even if the animals tolerate a little less and a little more without harm.

The care is best done in an aqua-terrarium in a larger group. In such a tank there is always something to observe. The animals are fed on a dry food basis, for variety all small frost and live foods can be given, also smallest crickets and flies are taken from time to time with pleasure. Breeding is complex (see the article by Hans-Georg Rupp in the magazine Koralle, issue 87 (2014)), but at least in principle possible.

For our customers: the animals have code 441182 on our stoclist. Please note that we supply exclusively to wholesalers.

The mudskippers (Periophthalmus) are among the most fascinating fishes at all. One can observe mother nature´s laboratory and how an aquatic animal becomes a landdwelling animal based on the observation of these fishes.

The Atlantic Mudskipper (P. barbarus) attains a maximum length of about 15 cm and is one of the larger species of the genus. Males can be easily recognized by the enormous large first dorsal fin. However, males are very aggressive against each other and it is hardly possible to keep two of them together on a long time sight. The tank for mudskippers should be furnished as an aqua-terrarium. Females  are somewhat less aggressive. One can compare the level of aggressiveness best with certain species of cichlids, like Tropheus or Petrochromis. Mudskippers are very intelligent and belong to the few species of small fish that really become tame. If the keeper is interested in this the mudskipper can be trained for example to come on the keeper´s hand to take food from the fingers. 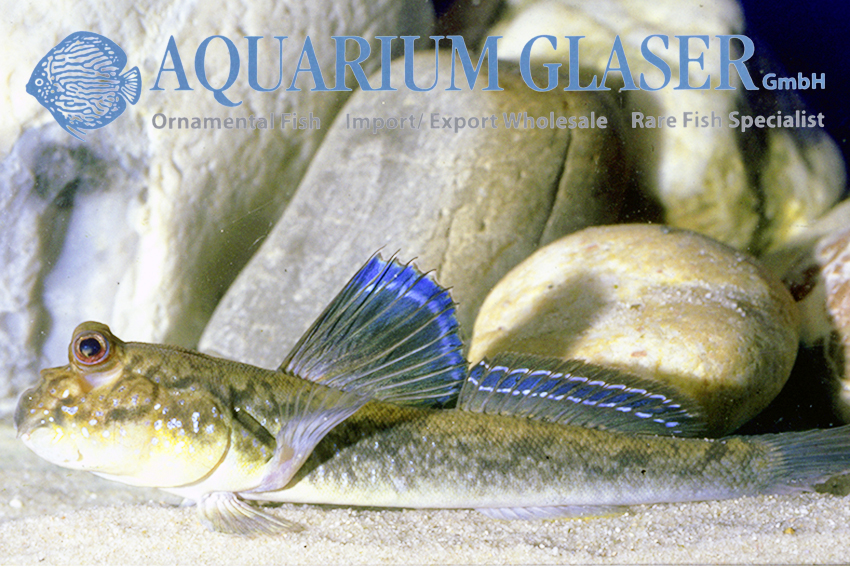 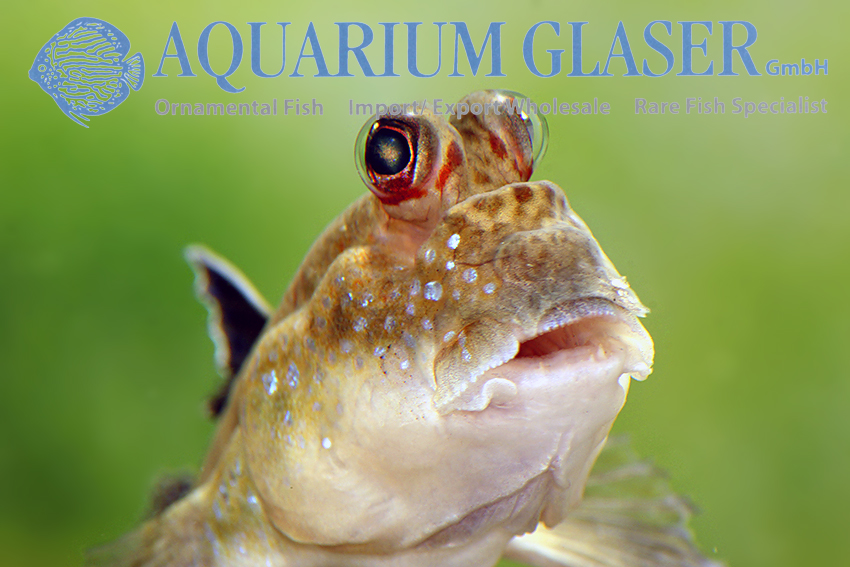 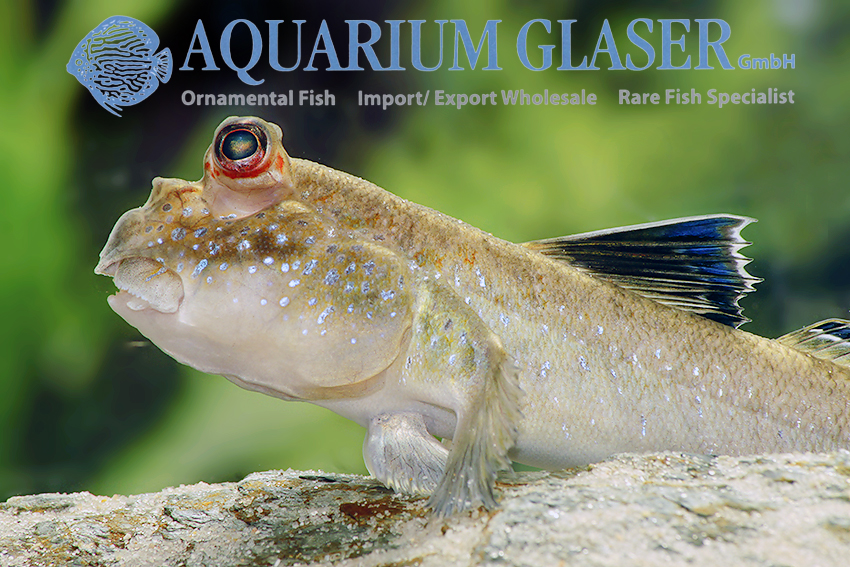 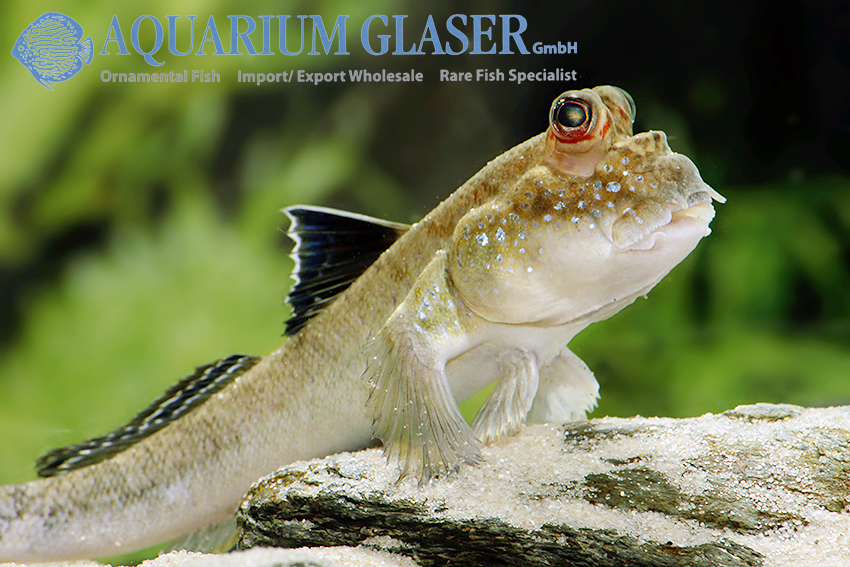 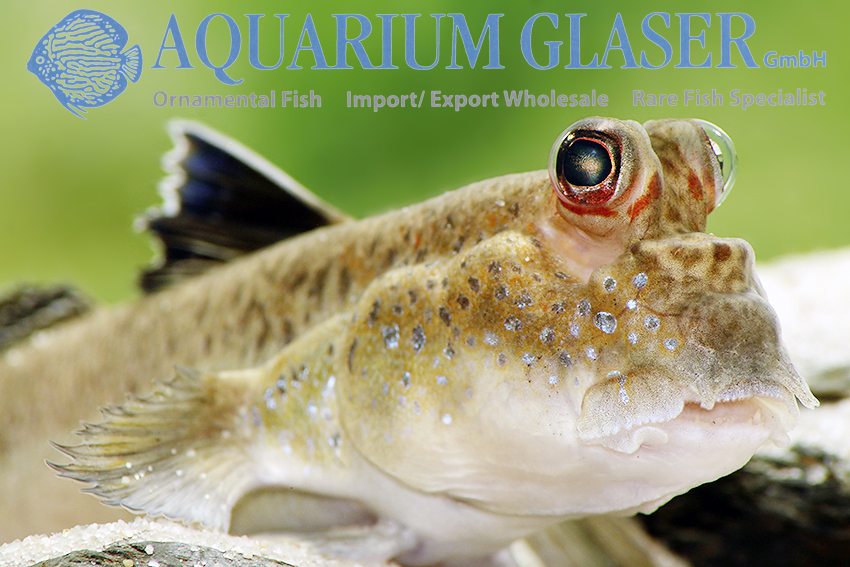 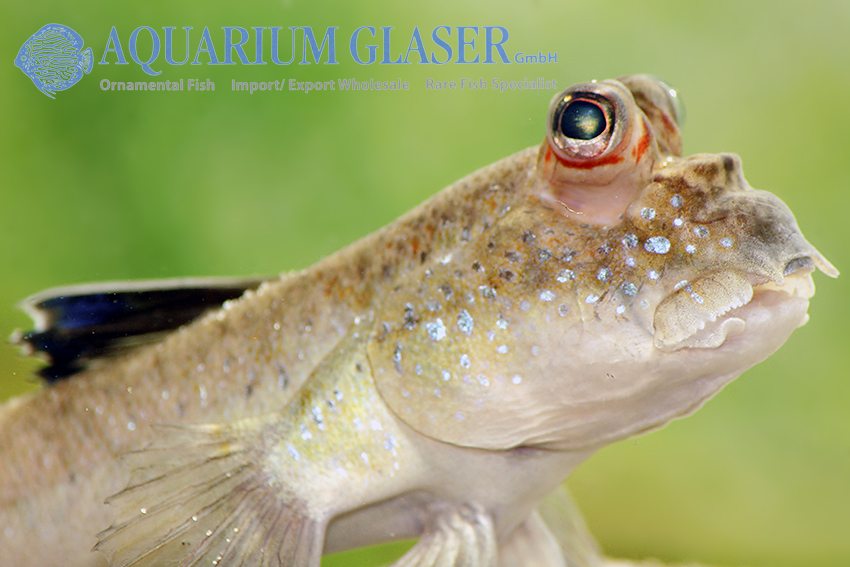 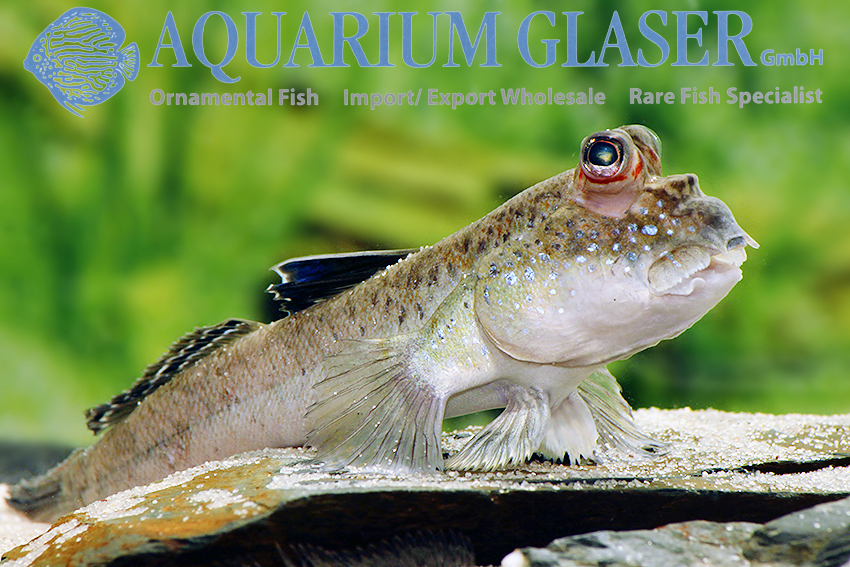 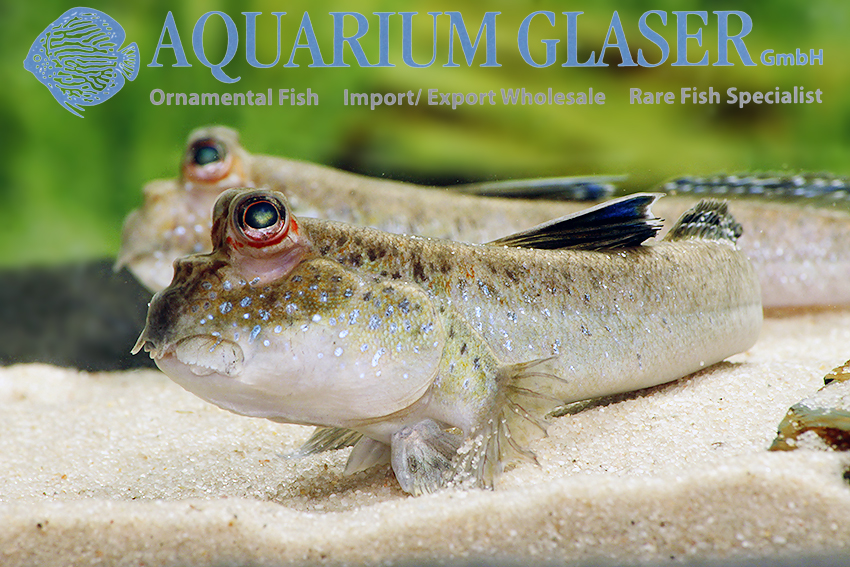 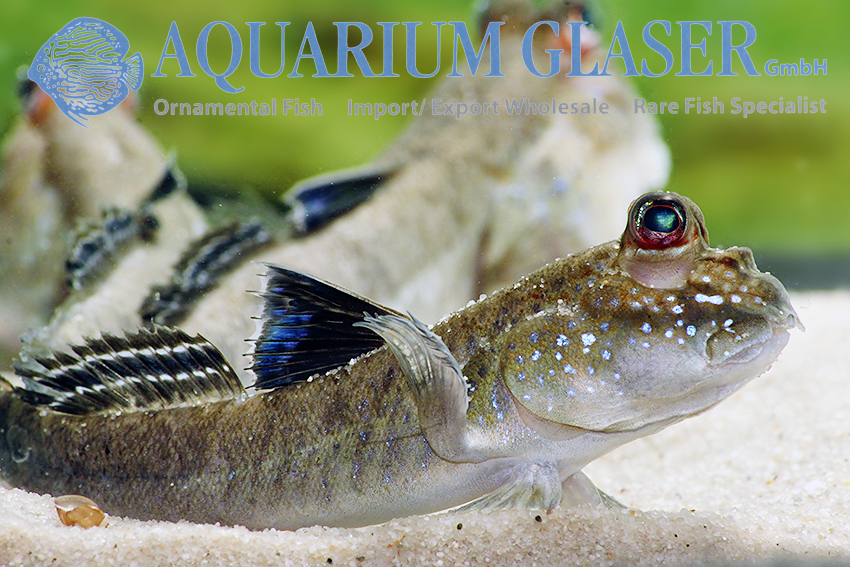 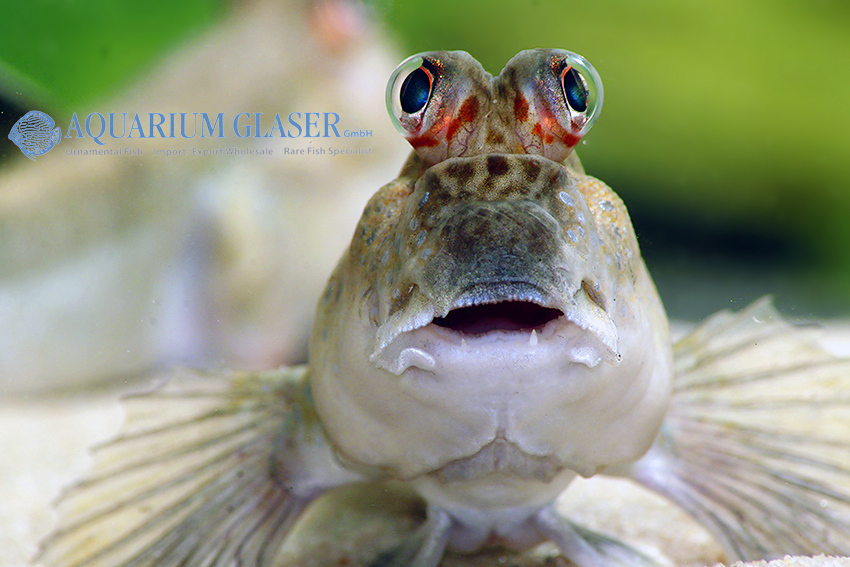 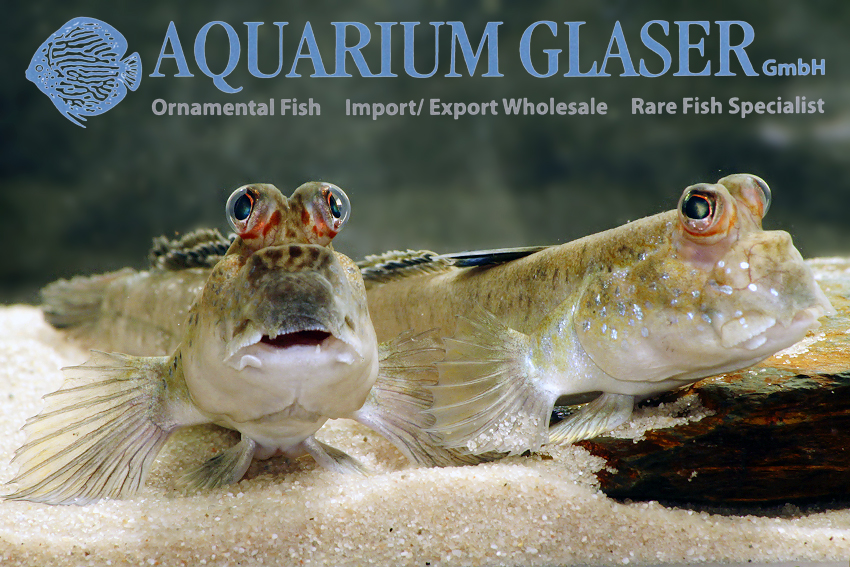 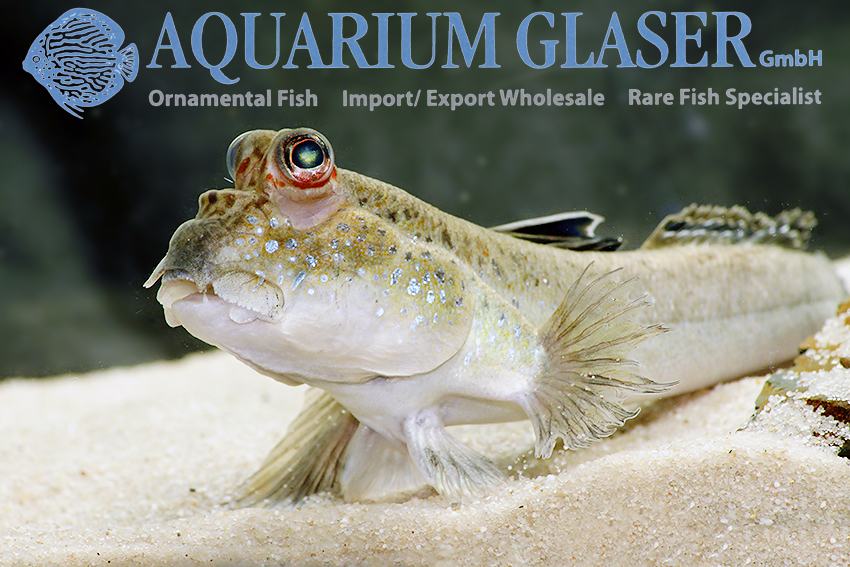 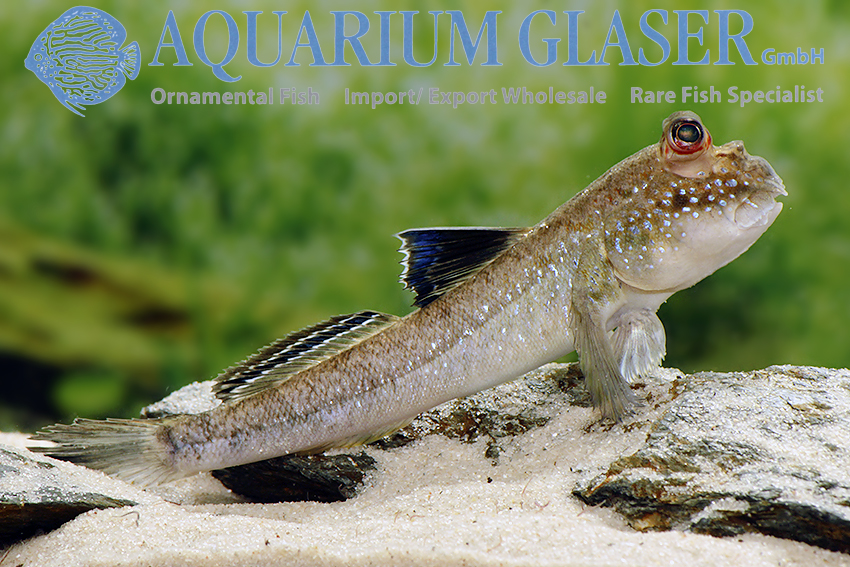 We have P. barbarus almost anytime in stock. Feeding them is simple, as they take readily any type of usual fish food, even flakes. A slight addition of seasalt (2-5 g/l) is positive for them, as it helps to keep the pH stable over 8. A lower pH is hardly tolerable for these fish.

For our customers: the animals have code 156503 on our stocklist. Please note that we exclusively supply the wholesale trade.