Now we have again two new variants on offer, both are German bred ones, descended from wild populations. The first is a pretty speckled fish discovered and brought back on a scientific collecting trip in Mexico. It comes from the area around Hotel Taninul (Carretera Km. 15, 79250, Tampico, Valles, 79250 Cd Valles, S.L.P., Mexico). Located in a natural park, “Set inside the Huasteca, a 740-acre ecological preserve, this rural resort hotel surrounded by tropical forest is 17 km from the town of Tamuín and 19 km from the center of Ciudad Valles.” (quoted from the hotel’s promotional website). Near the hotel grounds flows a nameless sulfurous brook and from it came the said X. variatus. Other fish species living in the brook were Poecilopsis gracilis, Astyanax mexicanus, Poecilia formosa and unspecified aquatic turtles.

The second form was found by the same expedition along road 85 in a drainage near Mante towards Victora (11 km north of Mante at km 105). There is no publication on this so far, this information was passed on orally. Therefore, so far there is only the provisional designation “1243” made in the field notes. This Platy is rather interesting than beautiful, because one looks for color with him in vain. Interesting are the strong melanophores in the front half of the body and the dark reticulation in the middle of the rear, which gives the impression of a longitudinal band. This variety will hardly be able to establish in the hobby, here is probably an unique buying opportunity for specialized friends of livebearers, while “Hotel Taninul” will certainly find its friends, especially since the males with increasing age develop increasingly strong yellow tones in the fins and back, as the breeder told us.

For our customers: “Hotel Taminul” has code 443095, “1243” code 443093 on our stocklist. There are limited quantities of both varieties available. Please note that we only supply to wholesalers.

Once again we can offer a  extremely beautiful wild strain of the variatus platy in good numbers as German offspring. The ancestors of these animals were collected in 2002 in Puente Escalanar, Veracruz, Mexico by private hobbyists and brought along. Since then, the animals have enthused mainly the community of friends of livebearers; to our knowledge, they have not yet appeared in regular trade. 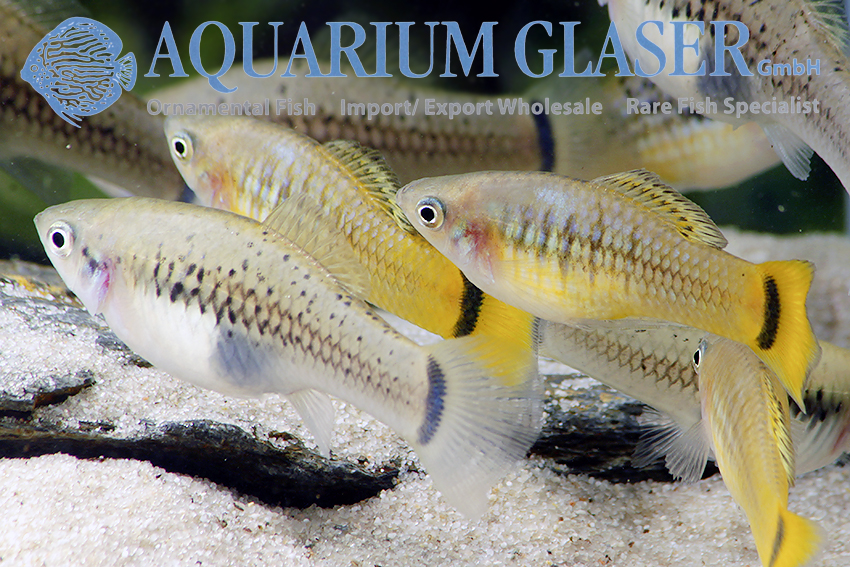 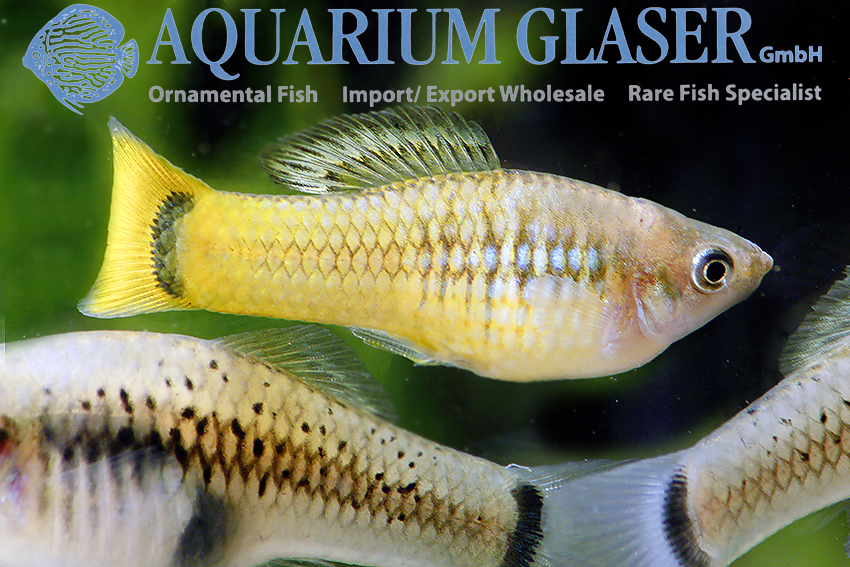 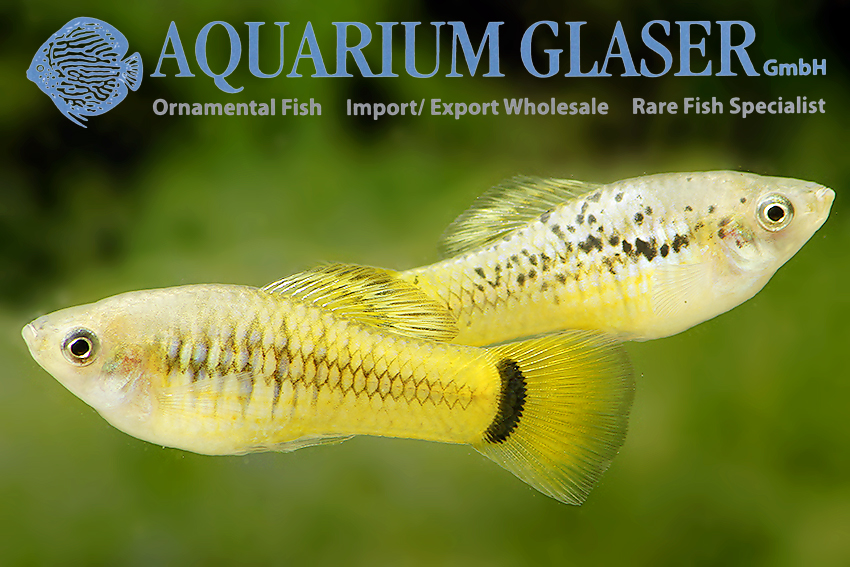 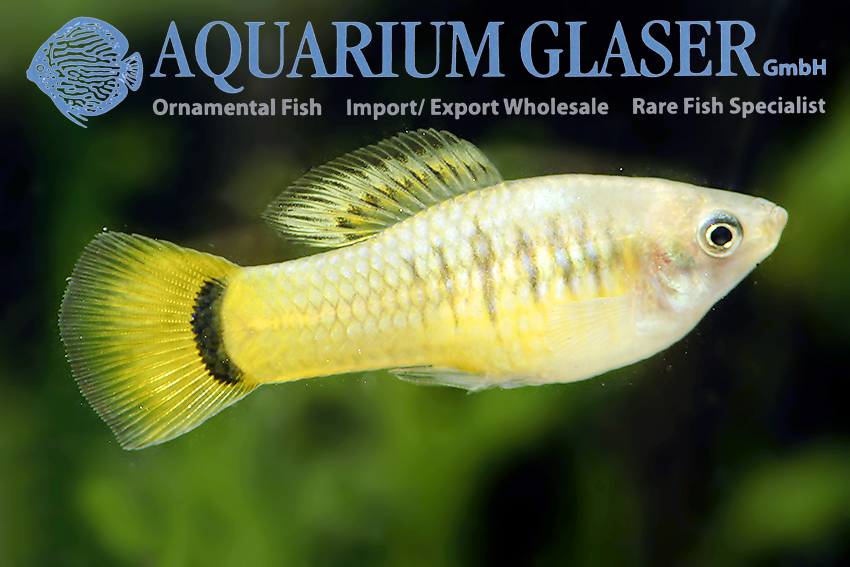 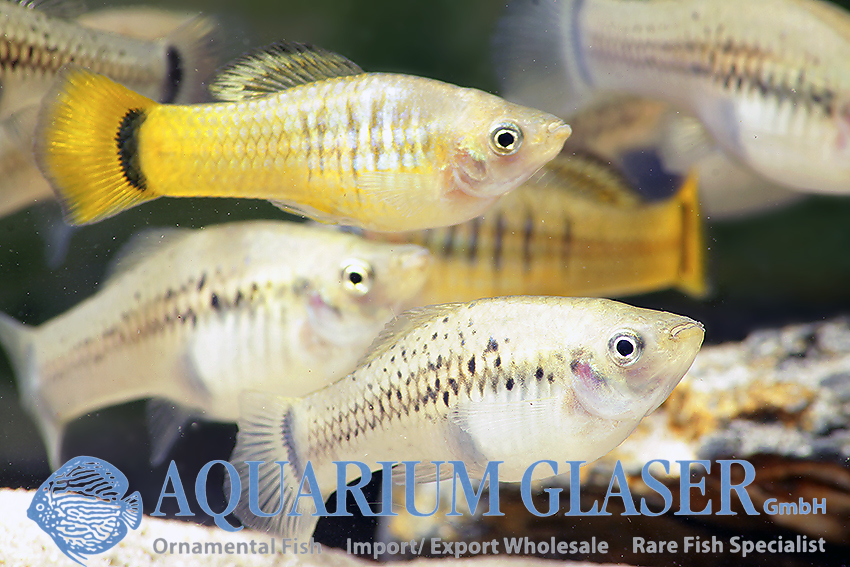 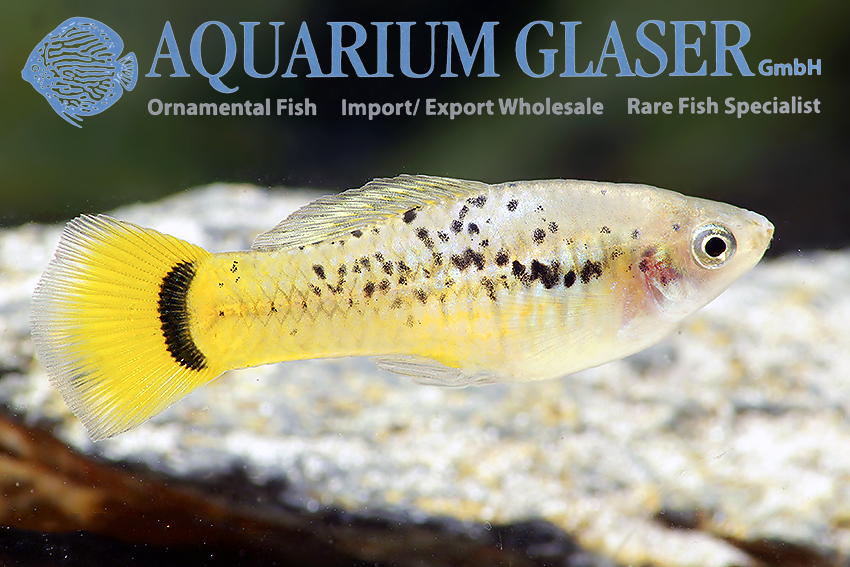 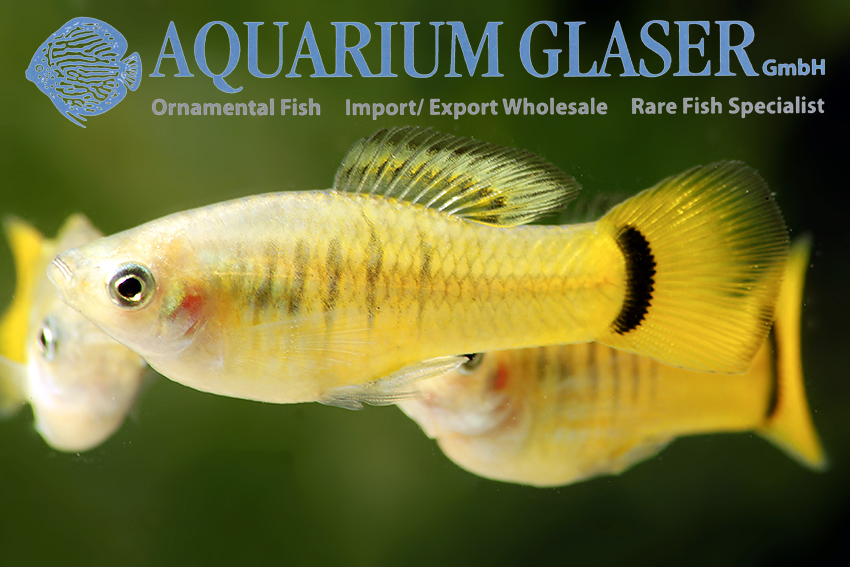 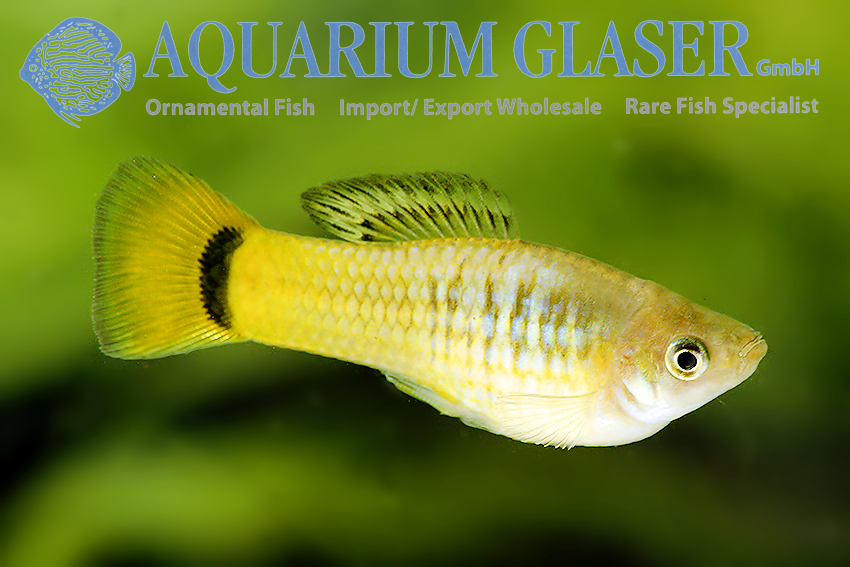 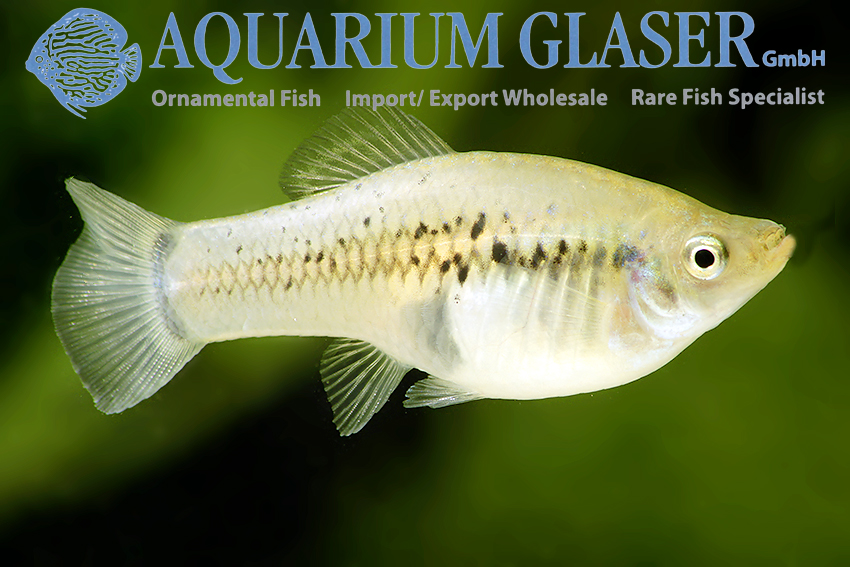 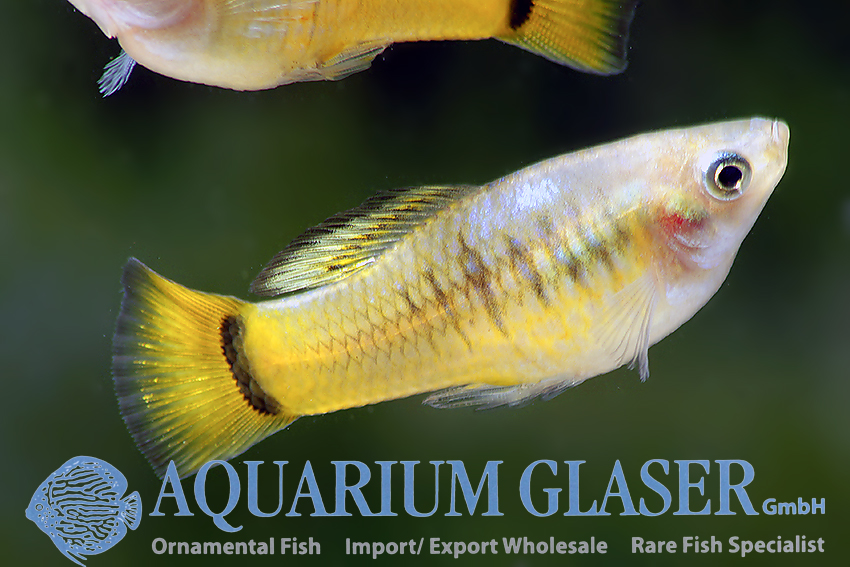 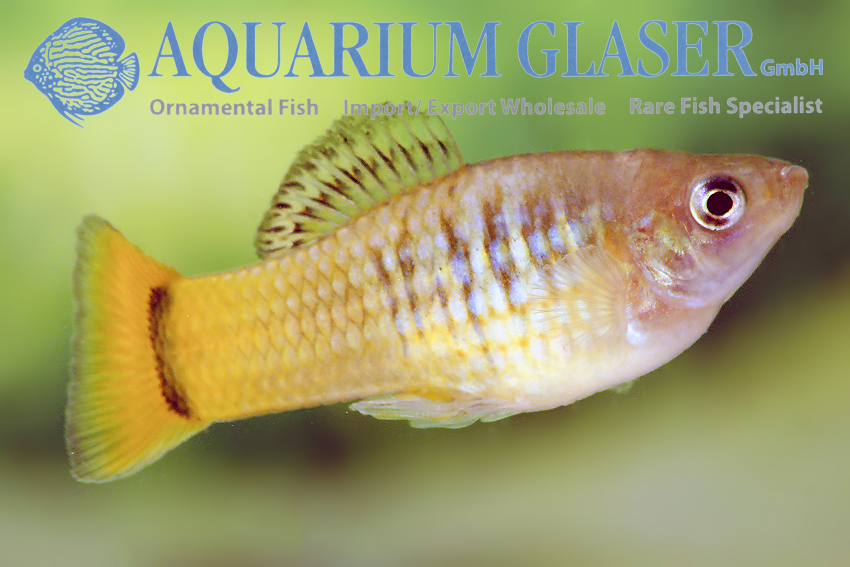 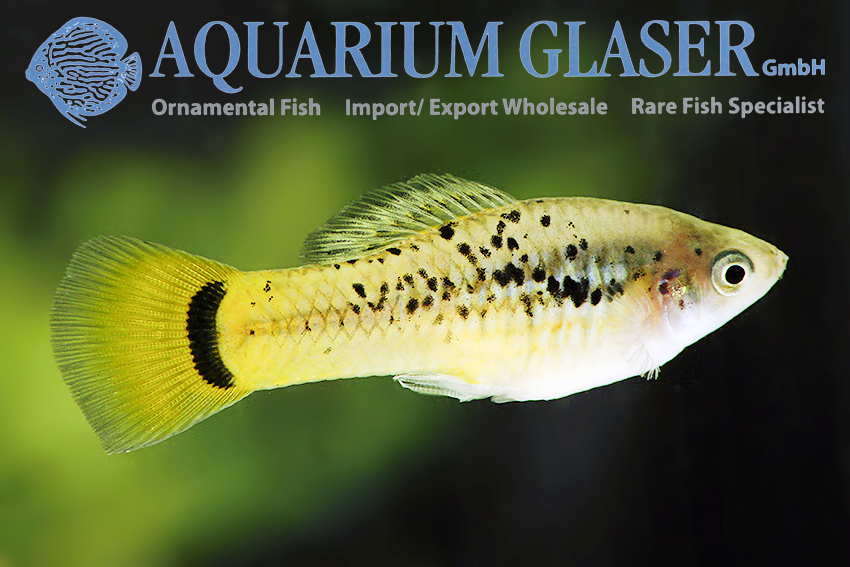 A special characteristic of these animals is the sickle-shaped tail-root-spot, which all specimens, males and females, show. Males have two basic coloration types. First specimens with tiger stripes on the flanks of the front body and second such, which are dotted here. Dominant specimens of the tigred variety become quince-yellow, with the dotted is much blue shimmer in the front body. Particularly beautiful are the sky-blue scales, which some males of the tigered form show along the mid of the front body.

They are lively, very healthy animals, whose behaviour has remained very original. When they are worried, they join together to form the swarm, which is very rarely observed among the domesticated tribes that have been around for a hundred years.

For our customers: the animals have code 443000 (sm-md) and 443002 (md-lg) on our stocklist. Please note that we exclusively supply the wholesale trade.

Once more we can offer a very beautiful wild sport of the variable platy: La Laguna! Our specimens are German bred. This sport originates from San Luis Potosi in Mexico; La Laguna de la Media Luna is a very popular place for tourism. 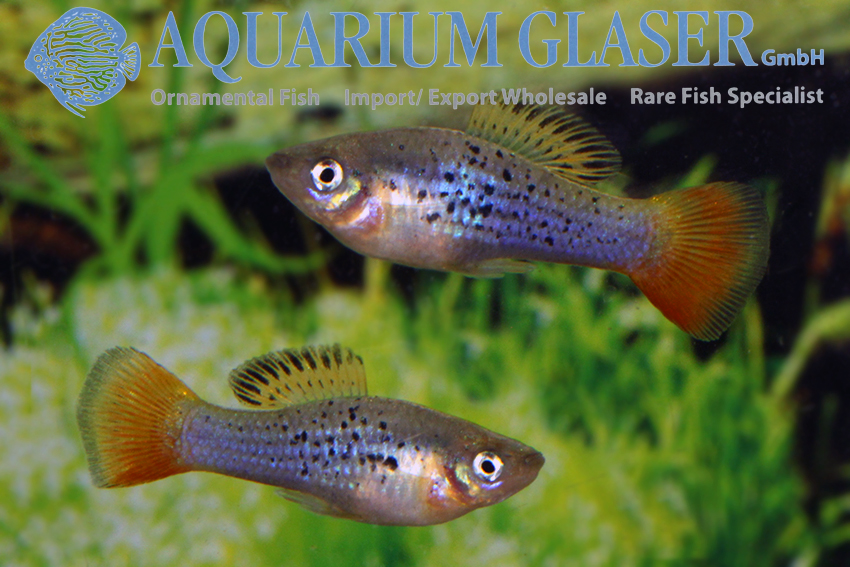 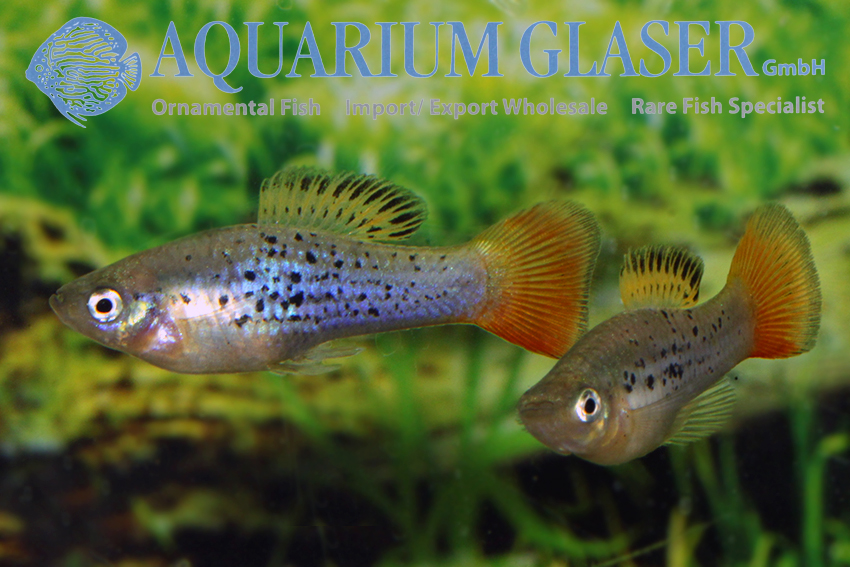 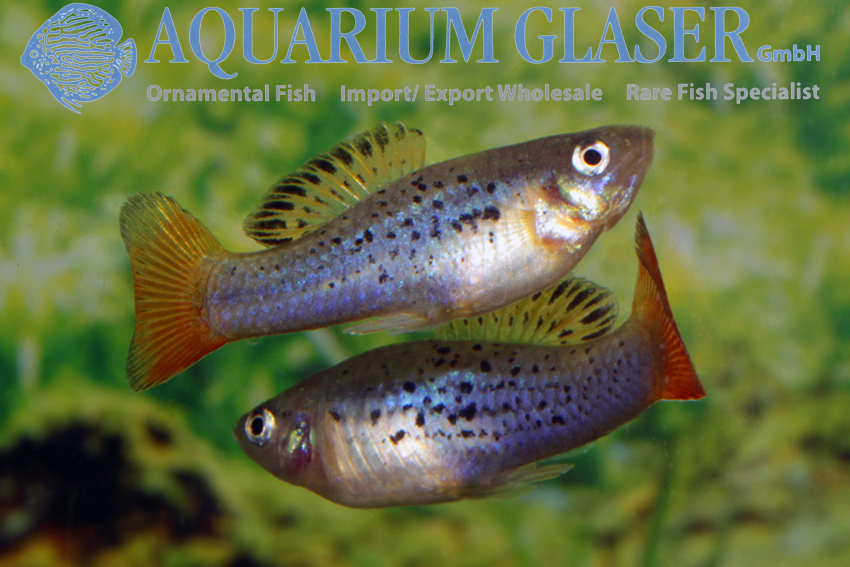 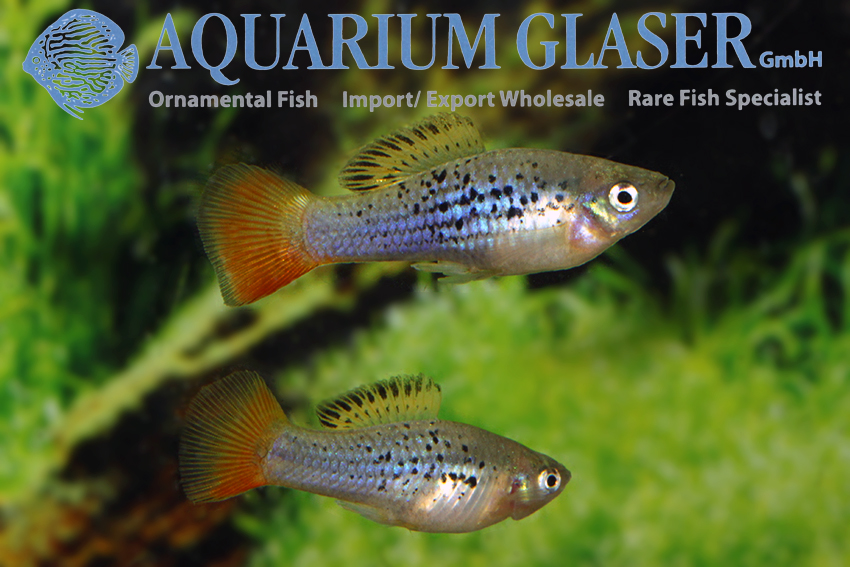 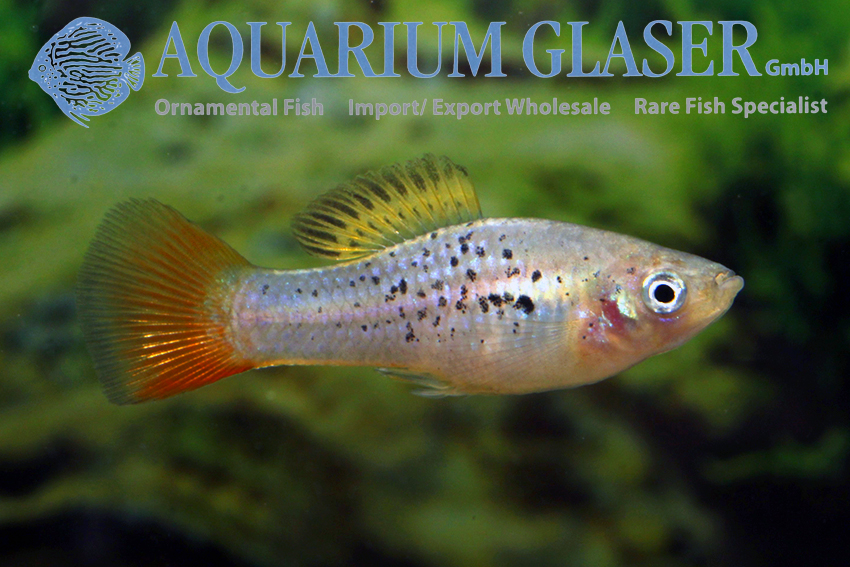 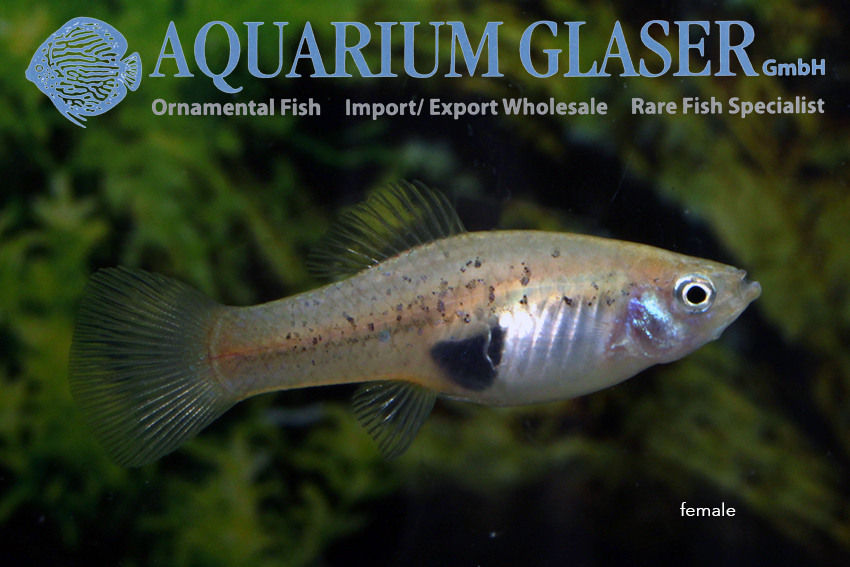 The peculiar difference of the population La Laguna to other sports of the variable platy are the dark seams of the caudal and the dorsal fin in males in full coloration, the so-called alpha-males. Not all males always show the colours in full intensity; it is recommend to keep several males together. Competition stimulates the development of colors!

For our customers: the fish have code 442981 on our stocklist. Please note that we exclusively supply the wholesale trade.