For almost 20 years, ichthyologists have disagreed on which rule of the International Rules of Zoological Nomenclature is more important for the gouramis of South and Southeast Asia: the prime directive, according to which everything else must be subordinated to the stability and universal applicability of scientific names, or the various rules that regulate which names are valid in synonyms (i.e. multiple names of the same genus or species).

The species Colisa/Trichogaster fasciata, which belongs to the western gouramis and was described by Bloch & Schneider in 1801, has always been a problematic case in zoology. The specimen on which the description is based was lost, the drawing to the species is inaccurate and where the fish is supposed to come from (Tranquebar in India, nowadays Tharangambadi) no gouramis of any species could be found until recently, although intensive searches were made.

Until now Colisa/Trichogaster fasciata was considered to be either the large gourami of the Ganges-Brahmaputra system, which was described in 1822 and for which the name Colisa/Trichogaster bejeus is available or (my humble self counts to this) for a South Indian species, which has not been found again as a wild form so far, but which should rather originate from the west coast (Tranquebar and Pondicherry (= Puducherry), from where also a gourami is described, are both located at the east coast; the area was a French colony from 1673 until Indian independence, which is why both Bloch & Schneider and Cuvier & Valenciennes were able to obtain naturalia via ports there; this does not mean, however, that the fish were also caught there).

Now new life came into the matter. A team of authors around J. D. M. Knight believes that the fish described by Bloch & Schneider is our well-known dwarf gourami. They support their thesis with the fact that preserved dwarf gouramis can have a round-appearing caudal fin and that Bloch’s description of Trichogaster fasciatus explicitly mentions a round caudal fin. However, in reality NO gourami species has a round caudal fin and the dwarf gourami Colisa lalia/Trichogaster lalius was not found in southern India until 1999. It is extremely likely that the dwarf gourami there are due to abandoned or escaped ornamental fish which were not found there in Bloch & Schneider’s time. Nevertheless, Knight et al. are so certain that they declare Colisa lalia/Trichogaster lalius to be an invalid synonym of Trichogaster fasciata.

So now the dwarf gourami has three “official” names, depending on the personal opinion of the scientists involved with it, and five spellings: Colisa lalia, Colisa lalius, Trichogaster lalia, Trichogaster lalius, and Trichogaster fasciata. Whether one writes lalia or lalius depends on whether the name lalius, chosen by the first describer Hamilton in 1822, is an adjective or a noun; Hamilton did not comment on this. In the former case, the fish is called lalia (Colisa and Trichogaster are female (femininum), in which case the Latin word ending for adjectives is -a); in the latter, i.e., if lalius is a noun, it remains unchanged no matter what the gender of the generic name is. With fasciata/fasciatus (Latin for striped) this question does not arise, this is indisputably an adjective and must be adjusted in the gender of the genus. The striped gourami, previously called Colisa/Trichogaster fasciata, should be called Trichogaster bejeus according to Knight et al.

In our stock list, the dwarf gourami and its breeding forms continue to be called Colisa lalia. This has technical and economical reasons, but at the same time we are out of this name mess. The pictures for this post show Colisa lalia „Neon Colour“, Code 411605, „Flame Red“, Code 411705, „Cobalt“, Code 411555, and wild coloured, Code 411505 on our stock list. Please note that we only supply wholesale.

Besides the orange colored breeding form of this gourami from Burma (see https://www.aquariumglaser.de/en/fish-archives/colisa-labiosa-orange-2/) there is also a very attractive, deep red colored breeding form. In order to keep these wonderful animals in their bright coloration permanently, it is necessary to provide certain types of food (e.g. Cyclops, Spirulina or also special flake food). Without the natural substance astaxathin contained in it, the colors will otherwise fade in the long term, just as in the case of flamingos, whose red coloration is based on the same substance. In addition to its positive effect on coloration, astaxanthin is also very healthy, as it is a natural antioxidant that reduces inflammatory processes. In human nutrition, astaxanthin is considered a dietary supplement.

But back to the Colisa! They are very beautiful and peaceful gourami, perfect for well-maintained community tanks with rich plant growth and also peaceful by-fish.

For our customers: the animals have code 411434 on our stocklist. Please note that we only supply wholesale.

Only from few breeding forms is so well known, when they originated, as with Colisa lalia “Flame Red”. At the same time the fish decorated the covers of all aquaristic journals worldwide in the early 1980s, so sensational were they found. The animals were bred in the Lim Choa Kang area of Singapore, a rural area at the time, where five farms were primarily involved in breeding dwarf gourami. According to a scientific study in 1985, 8,000 to 9,000 kg of dwarf gourami of the Red, Neon, Gold and Wild breeding forms were produced there annually, which at that time corresponded to a wholesale value of between US$800,000 and US$1,000,000. In comparison, the most expensive food fish that can be produced in such breeding ponds fetched just 1% of this amount at wholesale.

In 1985, the Red Dwarf Gourami was still the most expensive farmed species, costing 4-5 times as much as the “common” Colisa lalia. Nowadays this has all been put into perspective and all dwarf gourami cost similar. Every now and then we have XXL specimens of the “Flame Red” from Singapore in our stock. They are beautiful fish even after 40 years. By the way, in the breeding ponds in Singapore, these fish take just 5 months from egg to show size. Their overall natural life expectancy is 1-2 years. They are the orchids among the ornamental fishes, which will probably still find enthusiastic lovers in another 40 years.

For our customers: the animals have code 411705 on our stocklist. Please note that we supply only wholesale.

The identity of Colisa labiosa, a gourami from Burma, is unclear; there is some evidence that the species so named in the hobby is actually not identical with C. labiosa in the sense of the first describer (Day, 1877), but it is much more likely that it is a scientifically not yet named species. But be that as it is: the “Aquarium Labiosa” is the ideal gourami for every well-kept and densely planted community aquarium: it is extremely colorful, calm, peaceful and not very susceptible to diseases.

From the “Aquarium-labiosa”, there is a stripless bred sport, with altogether the blue color portions are missing and which comes along therefore in a splendid yellow-orange. The sometimes used variety name “peach” is well chosen, because as with this fruit, the coloration is not evenly distributed over the whole body, but as with the wild form, different parts of the body have different intensity.

The males can be recognized by the pointedly extended dorsal fin (rounded at the end in the female). With approximately 6 cm of maximum-size, the „Aquarium-labiosa” of both color-forms (therefore wild type and orange) are fully grown. They are typical bubble nest builders with father-family, like all other gouramis of the genus also. In respect of  feeding the animals are not very demanding, but you should consider that Colisa have a narrow throat and therefore cannot take up very large food chunks. They prefer to slurp finely grated dry food from the water surface.

Sexually mature males of the “Aquarium labiosa” have, just like the “real” Colisa labiosa, thickened lips – the species name “labiosa” means “lipped” and alludes to this anatomical peculiarity.

For our customers: the fish have code 411443 on our stocklist. Please note that we only supply the wholesale trade. 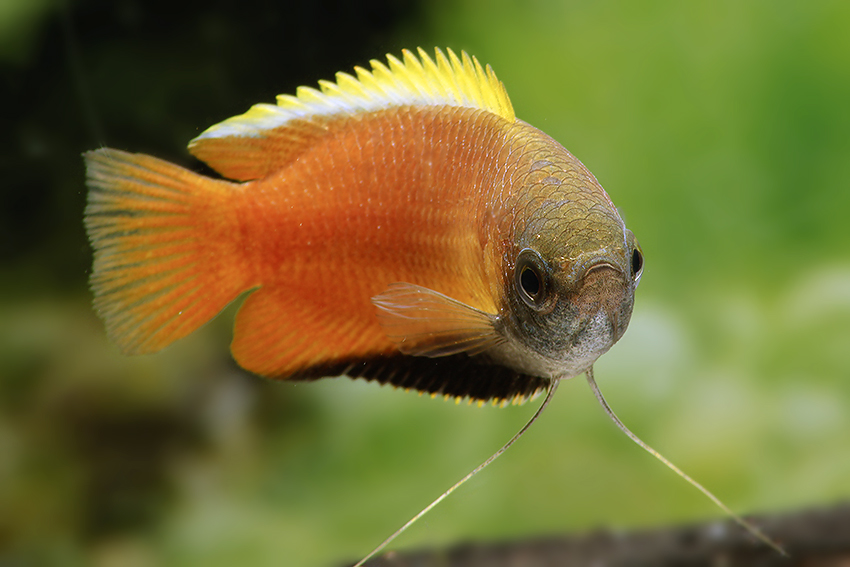 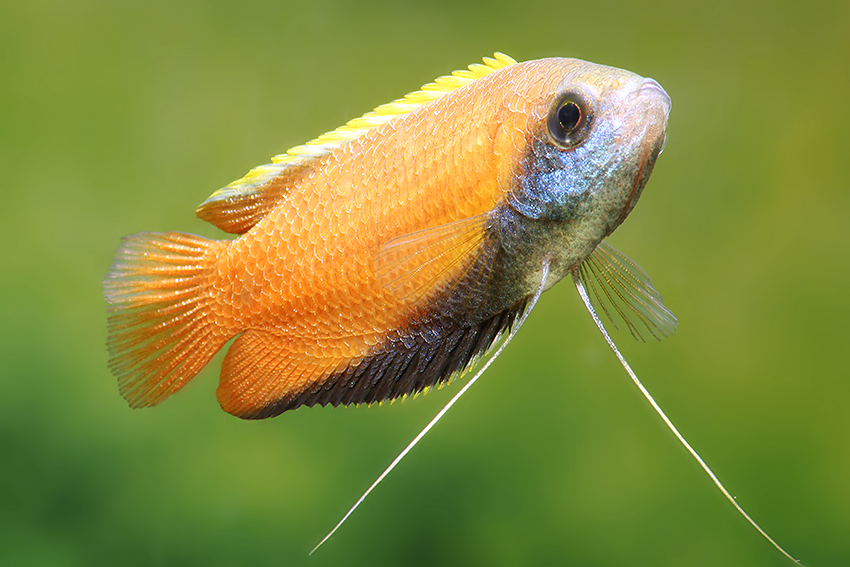 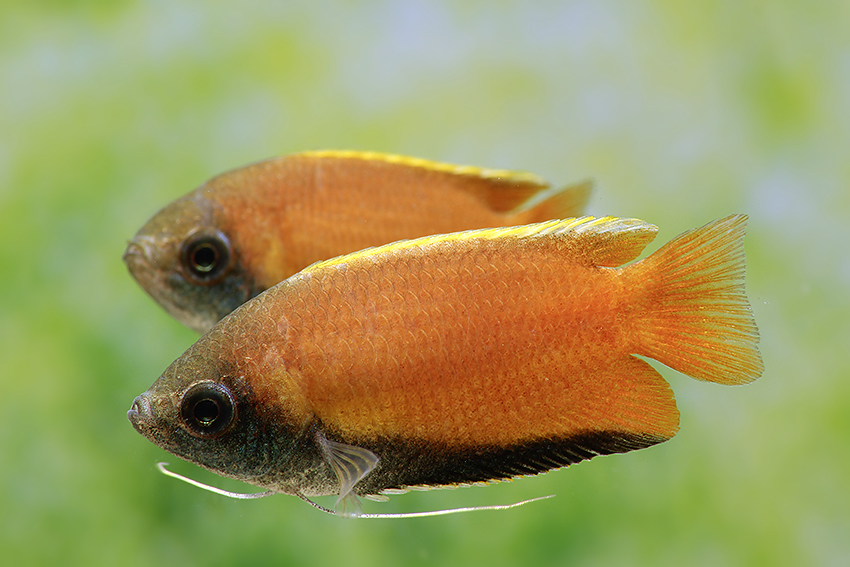 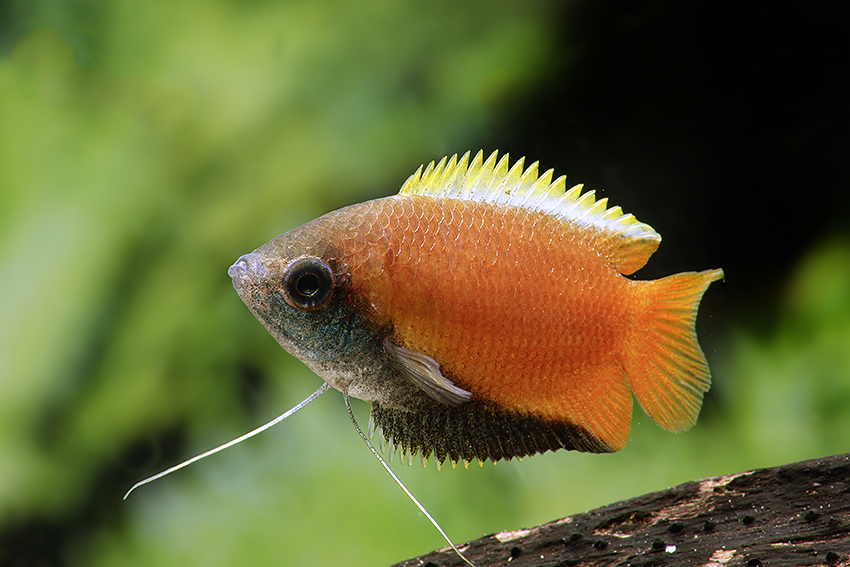 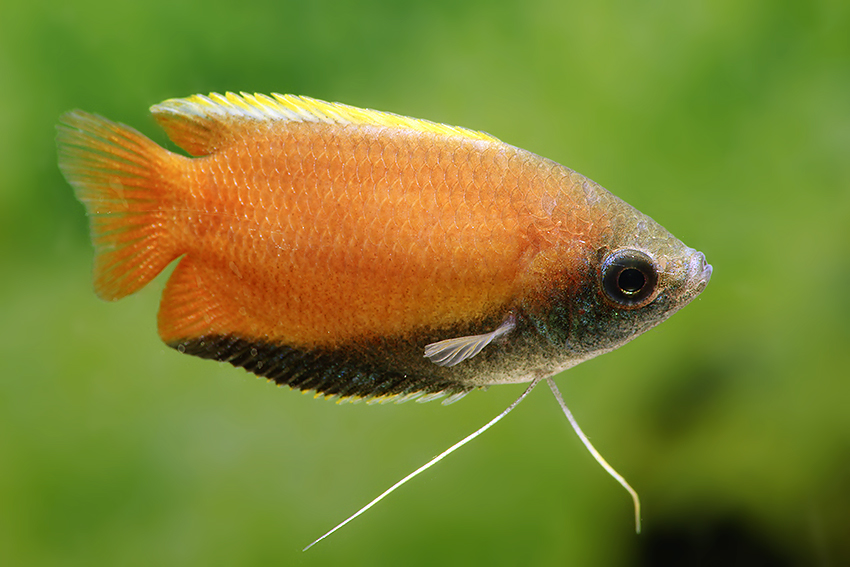 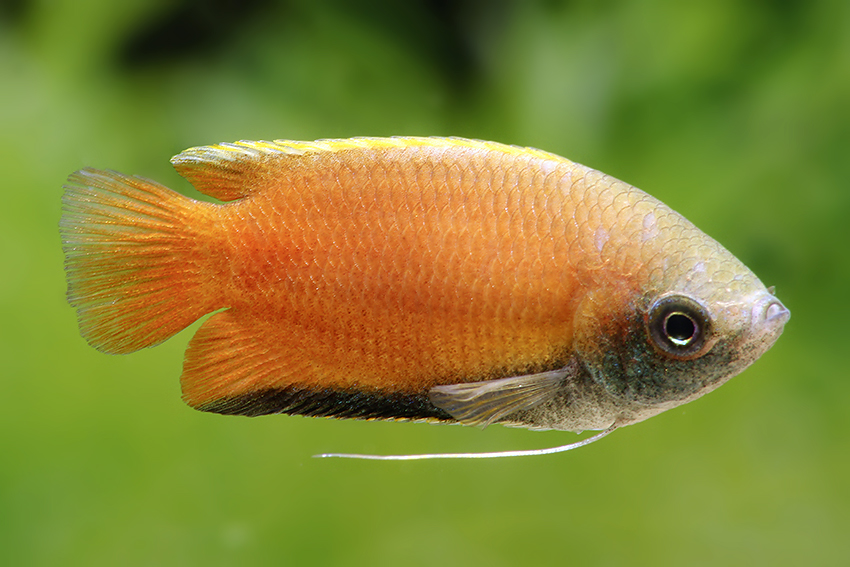 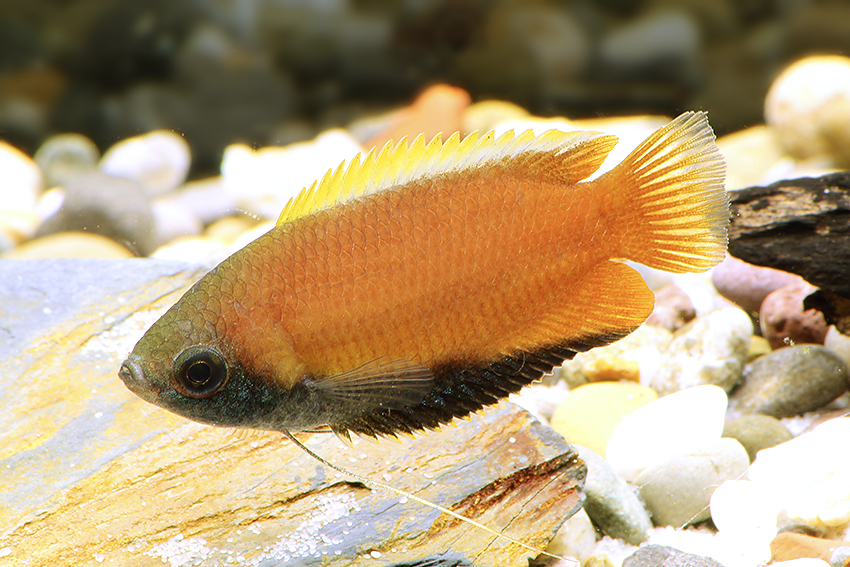 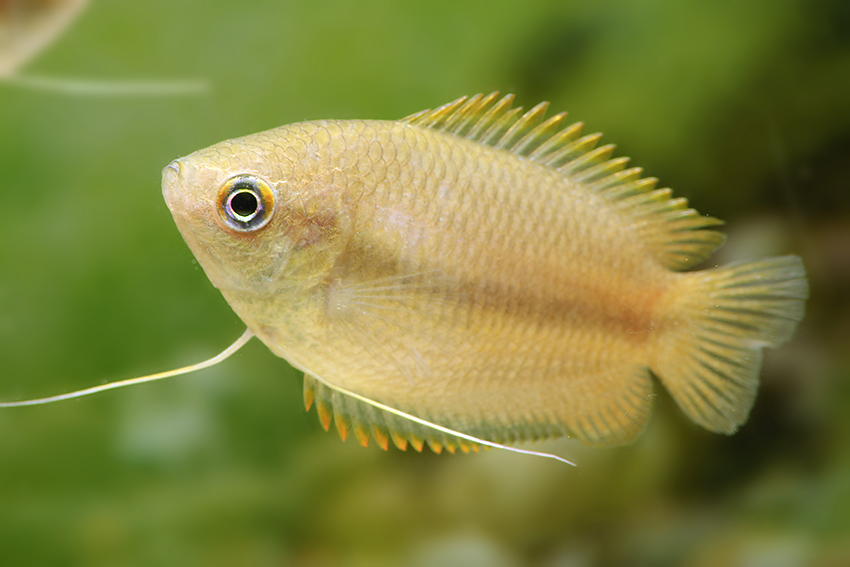 The honey gurami originates from India and Bangladesh. However, it is not as widespread there as the other members of the genus, which is probably the reason why the species was imported for aquaristics only in 1962.

For our customers: the animals have code 411104 on our stocklist. Please note that we only supply wholesalers.

Actually, nobody knows exactly what Colisa fasciata is; because the specimen on which the first description is based was lost in the turmoil of the French Revolution and where it is supposed to come from (Tranquebar in the south of India) there are no gourami at all. That’s why everything that isn’t Colisa lalia, C. chuna or C. labiosa is currently called simply C. fasciata. 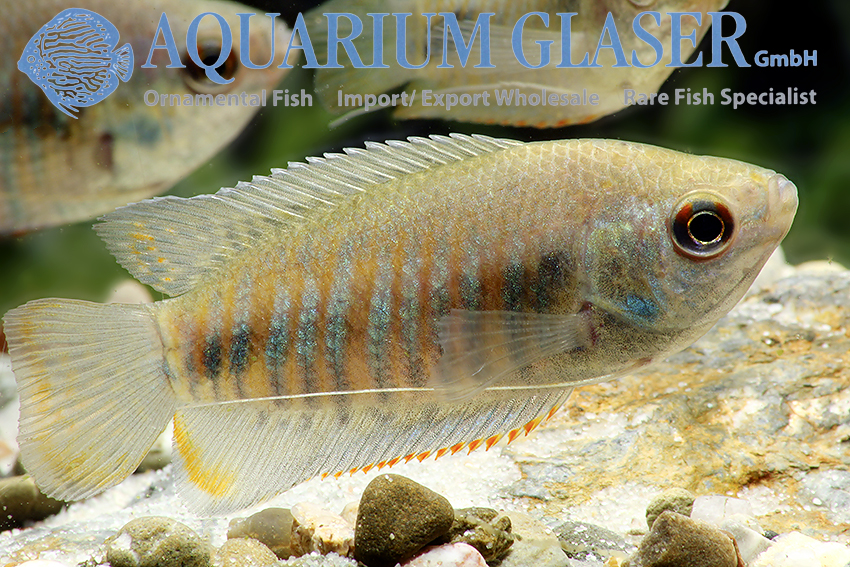 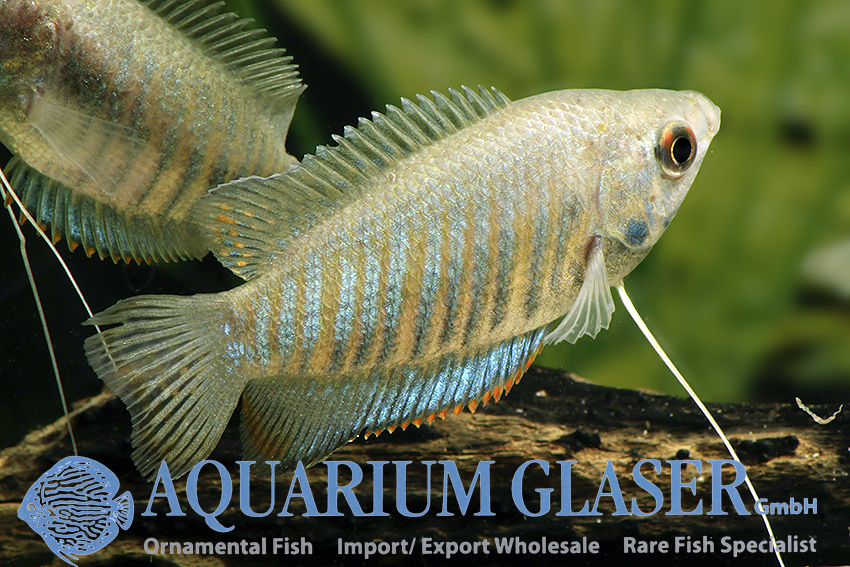 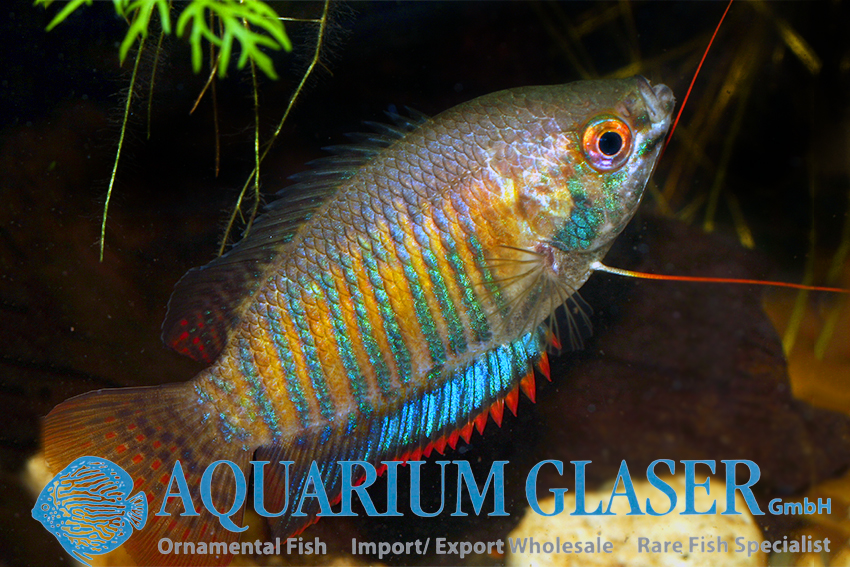 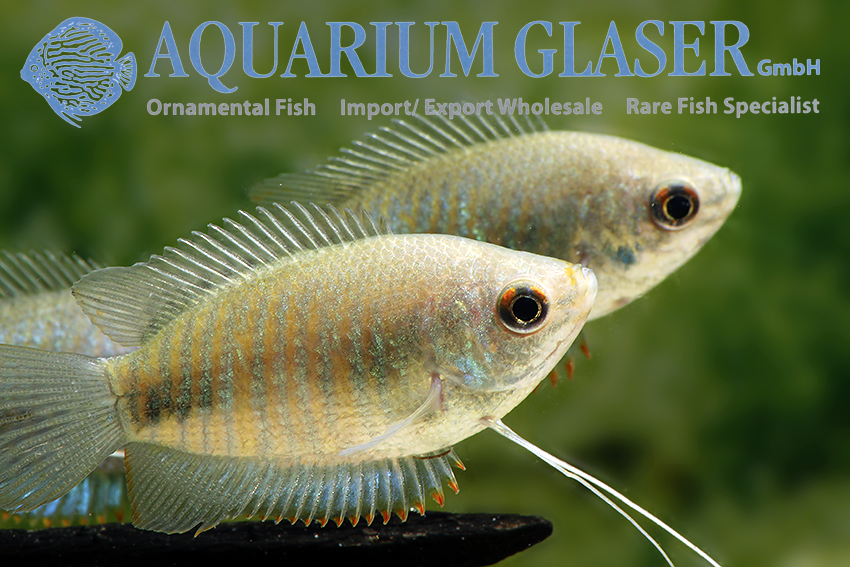 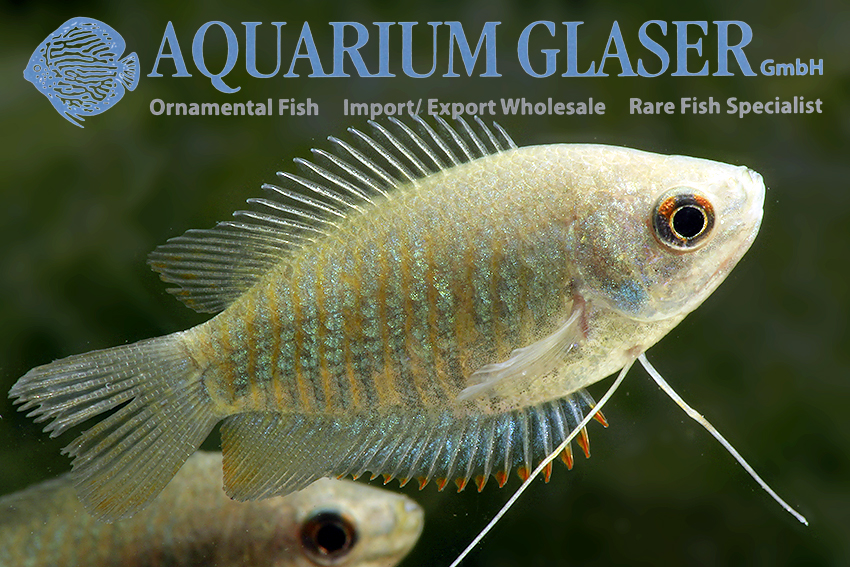 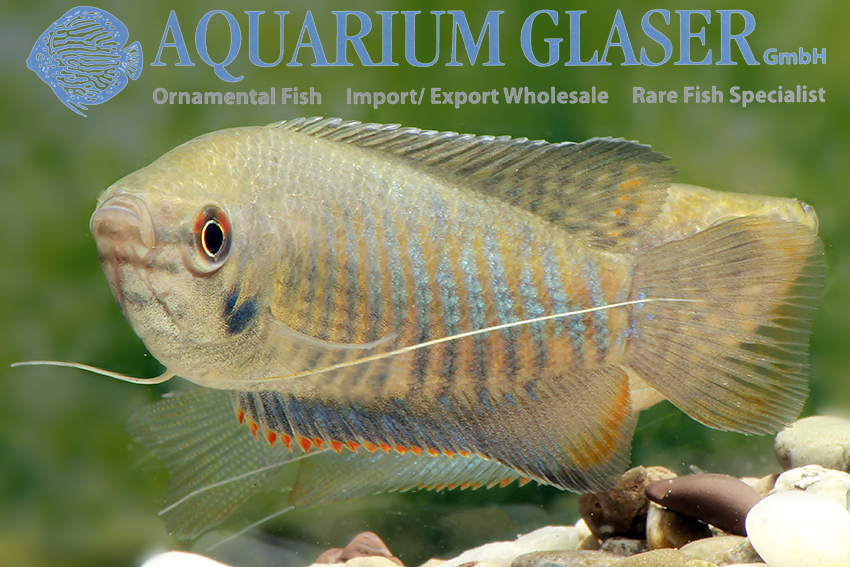 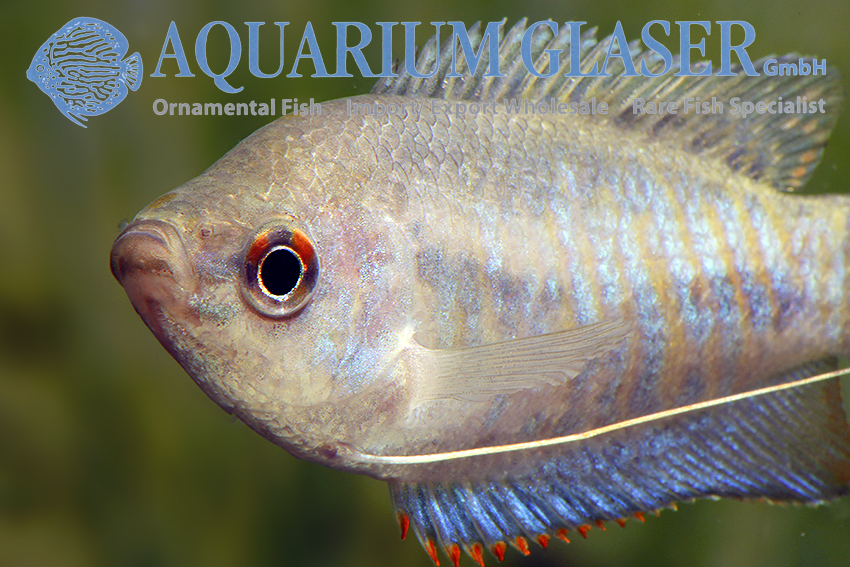 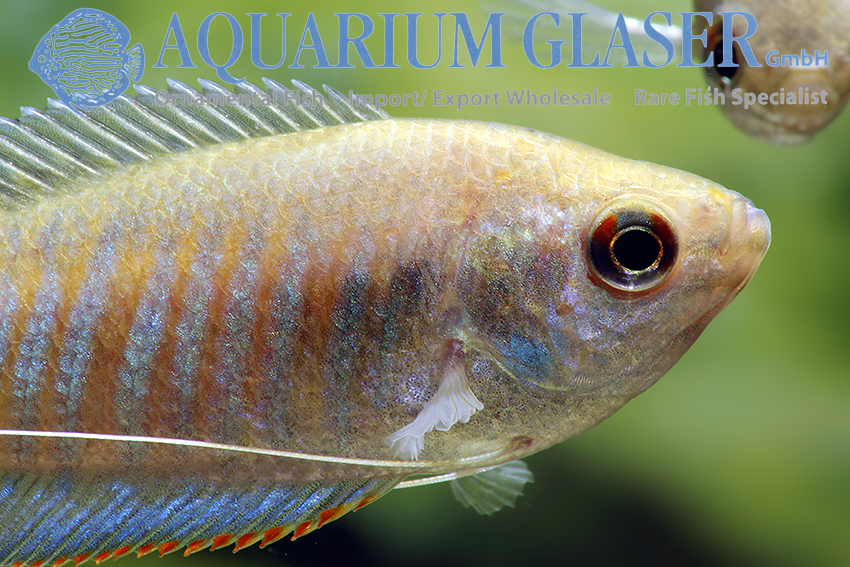 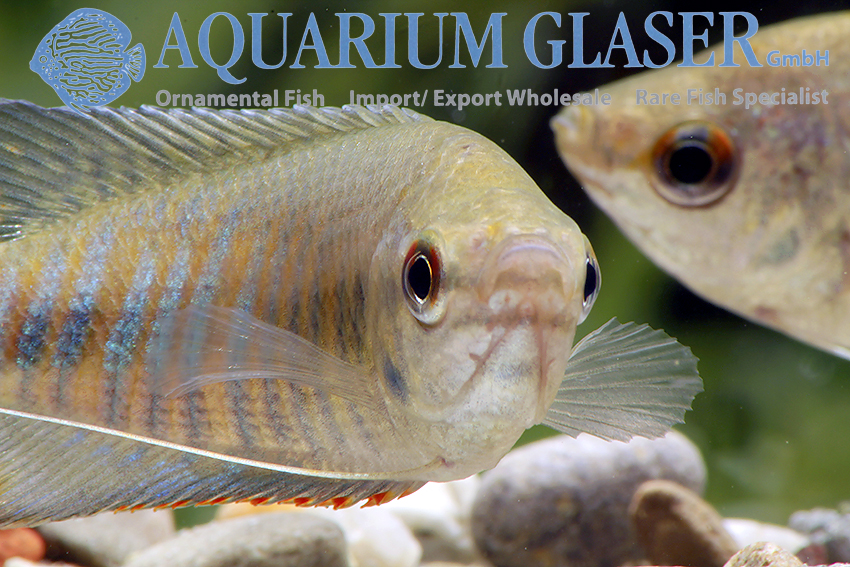 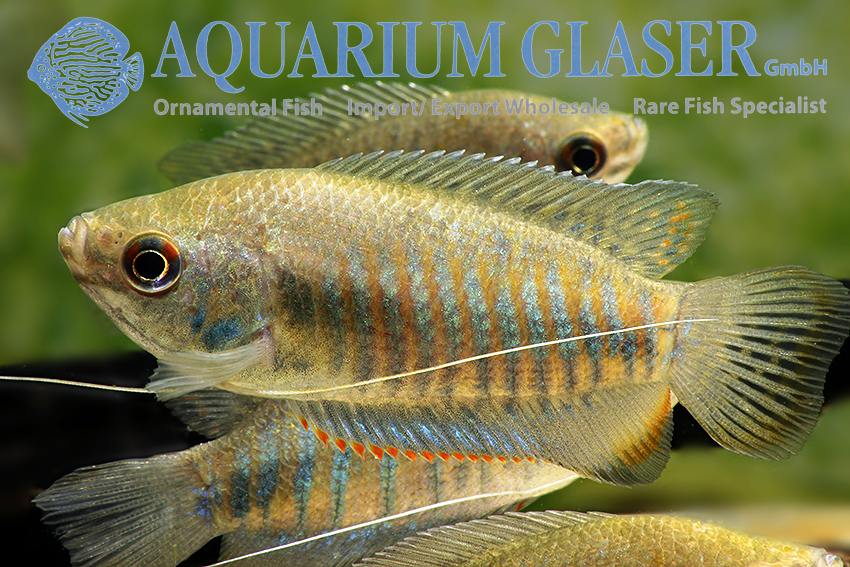 The beautiful wild catches, which we have just received from Bengal again, are characterized by their particularly narrow stripes. This special form normally grows to about 4-5 cm, very rarely to 6-7 cm, so its size is comparable to the breeding forms of the dwarf gourami (C. lalia).

The peaceful, sometimes somewhat shy animals should be cared for in well planted aquariums with other peaceful fish. They are most beautiful at 26-32°C, but one should consider that the water temperature in the natural habitats can drop to 16°C depending on the season. While these animals barely live one year in nature, they often reach 4-5 times of that lifespan in an aquarium.

For our customers: the animals have code 411203 on our stocklist. Please note that we only supply wholesalers.