For the first time we can offer this magnificent breeding form of the black paradise fish. Our breeder writes about it:

How did I become aware of these fish:

In 2019, I saw a picture of blue paradise fish from Vietnam in a Facebook group for paradise fish lovers by chance. Being skeptical at first I did some further research on Facebook and found a few Vietnamese posting photos of such animals. These animals immediately fascinated me as a labyrinth fish lover and I started looking for a breeder in Vietnam who would sell them to me.

How did I get this paradise fish:

After some time, I had located a breeder in Vietnam on Facebook. At that time, the fish were quite new even in Vietnam and only known among hobbyists for a few years. He told me that the variety is called Royal Blue and it should be a breeding form from the Macropodus spechti. Due to the still high price in Asia, the small quantity I wanted to purchase as an individual, and the resulting single animal shipping, each fish would cost a fortune. I decided to import 3 pairs through a shipping agent at over 100 Euros each to still have replacement animals in case of any failures. Although this import meant a high risk for me, I decided to send money to the Vietnamese via Western Union and trust in the good in people.

Thank God, a few weeks later 6 young animals arrived at my place alive. They were as white as chalk and swam nervously up and down the glass of the quarantine aquarium. Also live food in the form of water fleas and cyclops, which I offered, had to be newly recognized until they ate it. As far as I have learned, paradise fish in Vietnam are mainly fed rice worms and Tubifex. Tubifex I have also tried, but made rather bad experience. Therefore, I suspect that there are either other types of Tubifex or fresher quality in Vietnam. Feeding high quality granules, live and frozen Artemia, Cyclops and water fleas seems to suit the paradise fish best with me.

After some time the paradise fish showed a nice, strong dark blue color and I could start the first pairs for breeding. Unfortunately this was unsuccessful at first, because the eggs were not fertilized and did not develop. That started well…

A few weeks later it worked and I had the first broods swimming, which I fed with infusoria and after about 1 week switched to freshly hatched Artemia. After a few weeks the fry started to develop color and I was curious if I had got purebred animals. To my great joy all fry became blue! These offspring now showed completely normal behavior and were accustomed by me to commercial food.

After a first post in the Facebook group of the IGL and the overwhelming response it was clear to me that this variety should be made available to a larger group of customers.

So much for our breeder. We have nothing to add to this, except to point out that the males of this form develop very lush finwork.

For our customers: the fish have code 425613 on our stocklist. Please note that we exclusively supply the wholesale trade.

Once again we managed to import a Macropodus form from Vietnam which cannot be clearly assigned. Unfortunately nothing can be found out about the original location. Some years ago we had been able to import similar animals, also from Vietnam, but they had a strong bronze shine on their body, which is missing in the current imports. The animals imported in 2015 can be seen here: https://www.aquariumglaser.de/en/fish-archives/macropodus_spechti_en/ 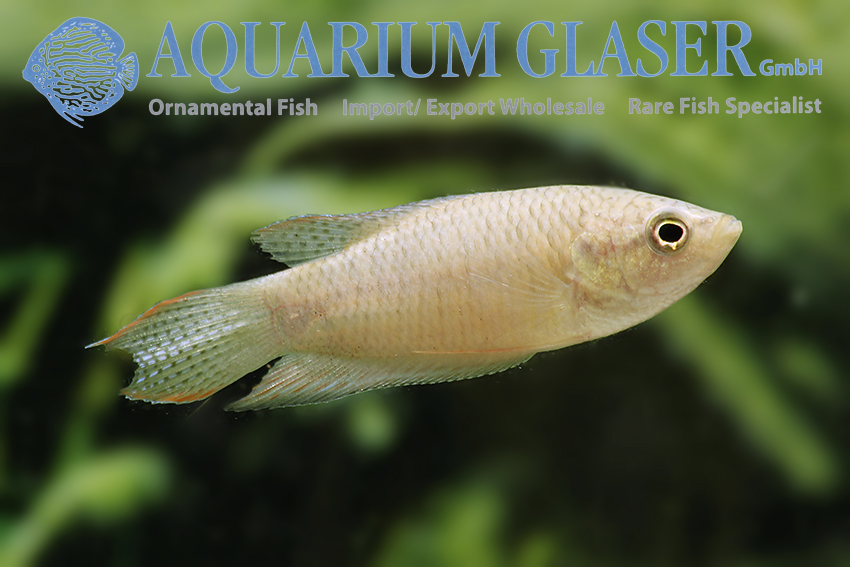 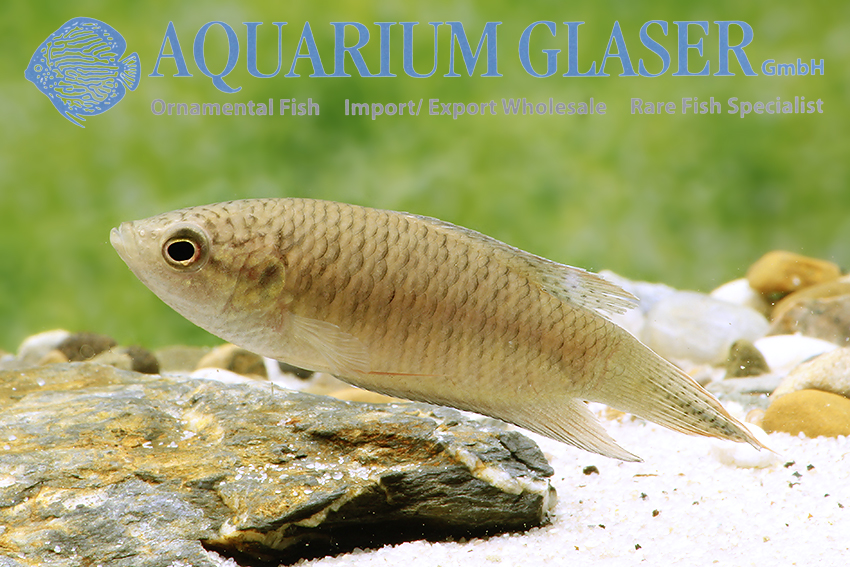 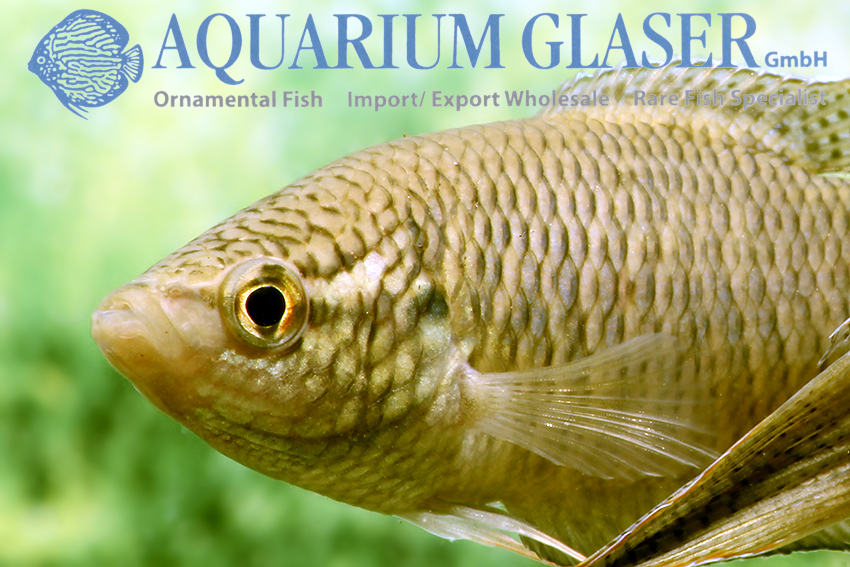 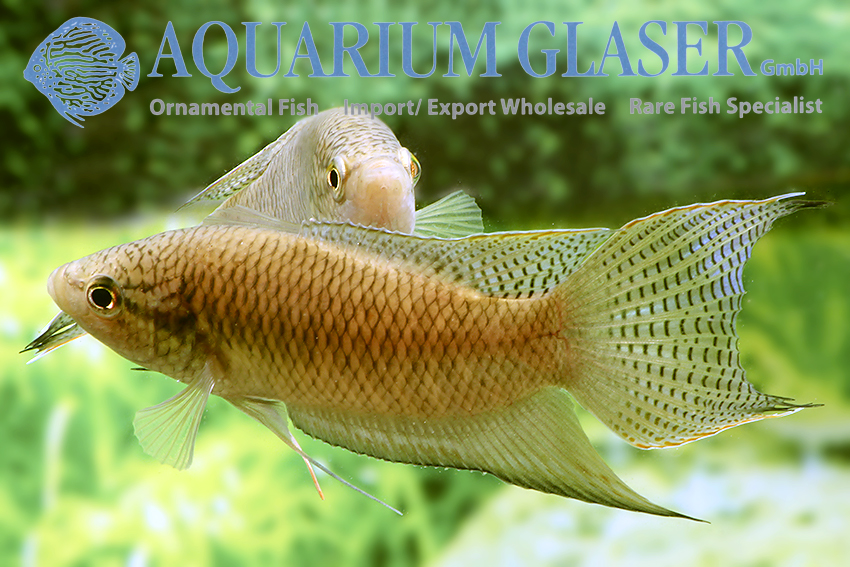 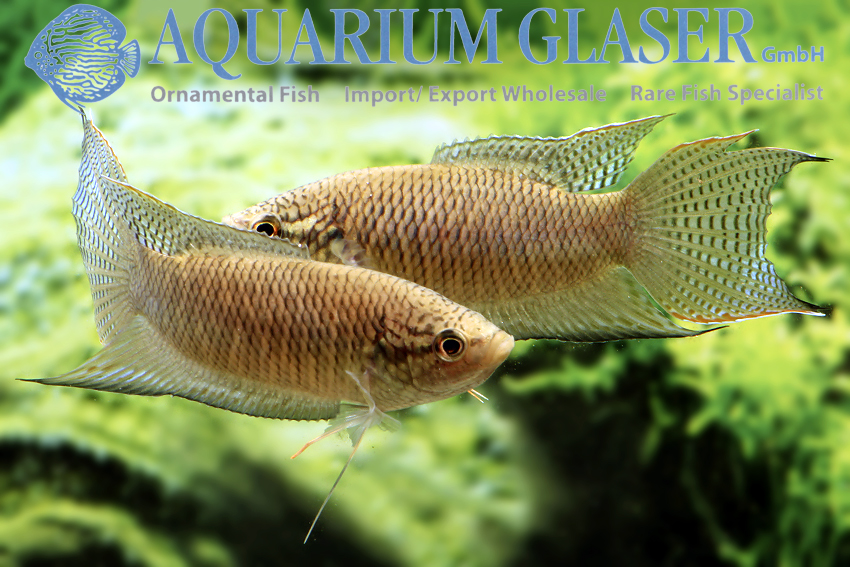 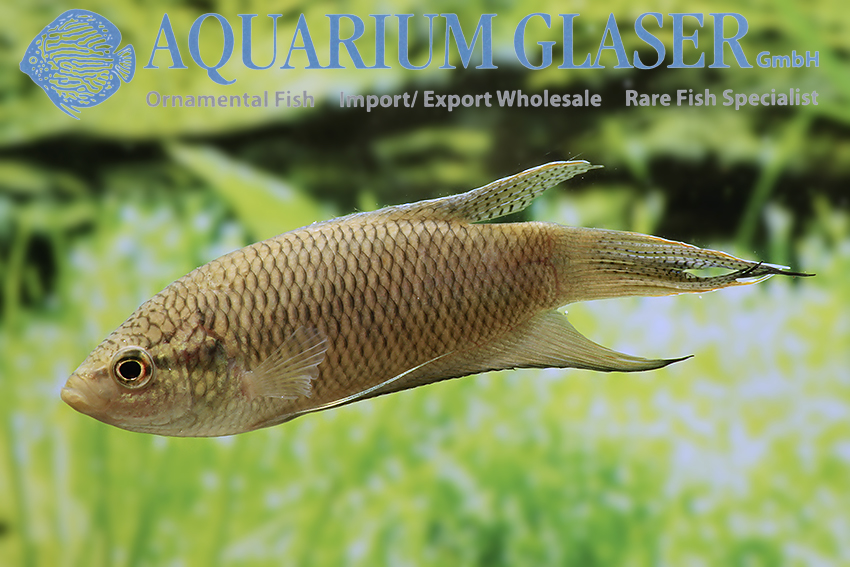 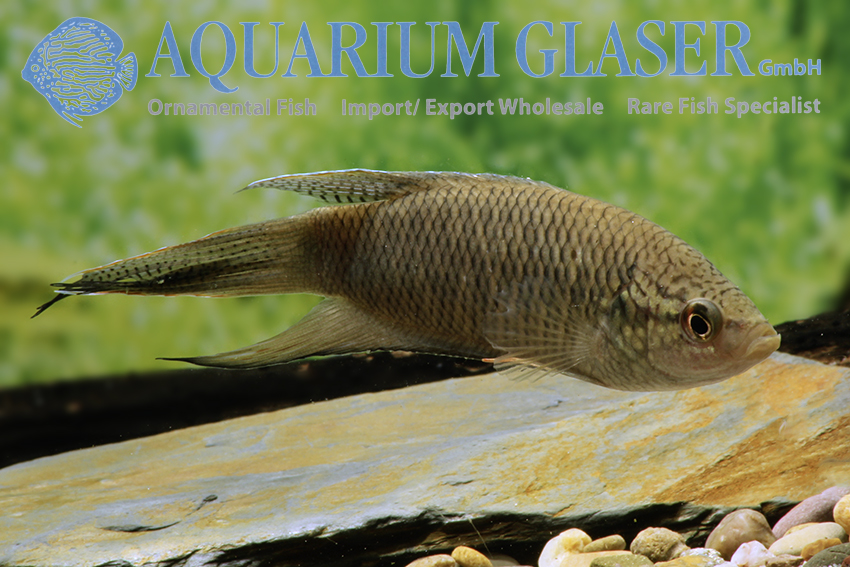 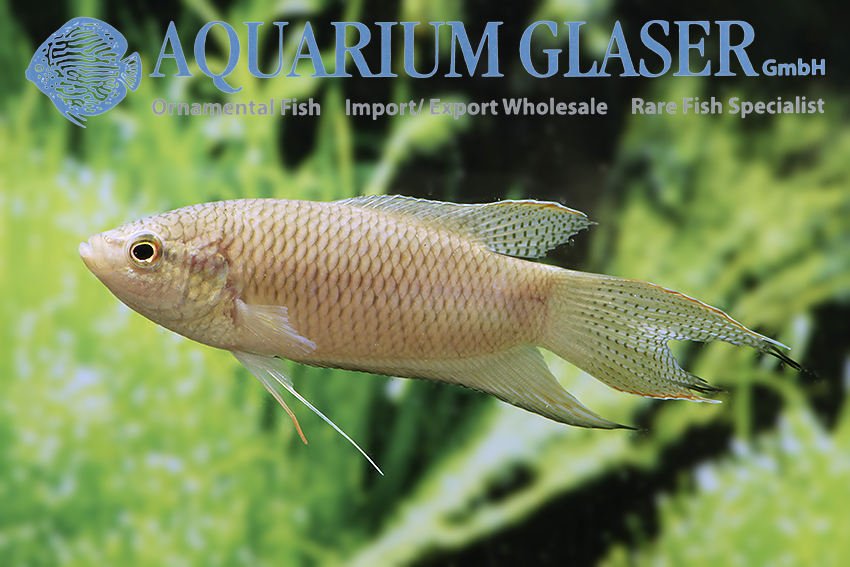 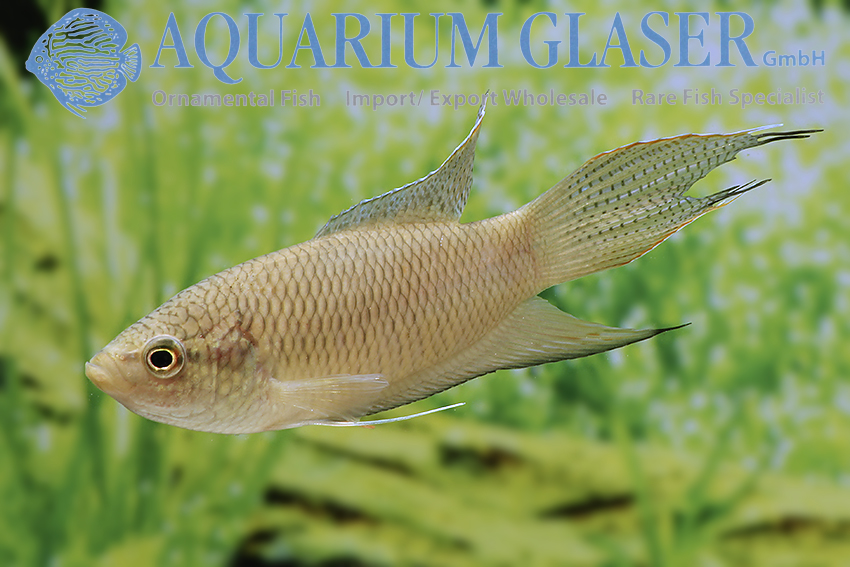 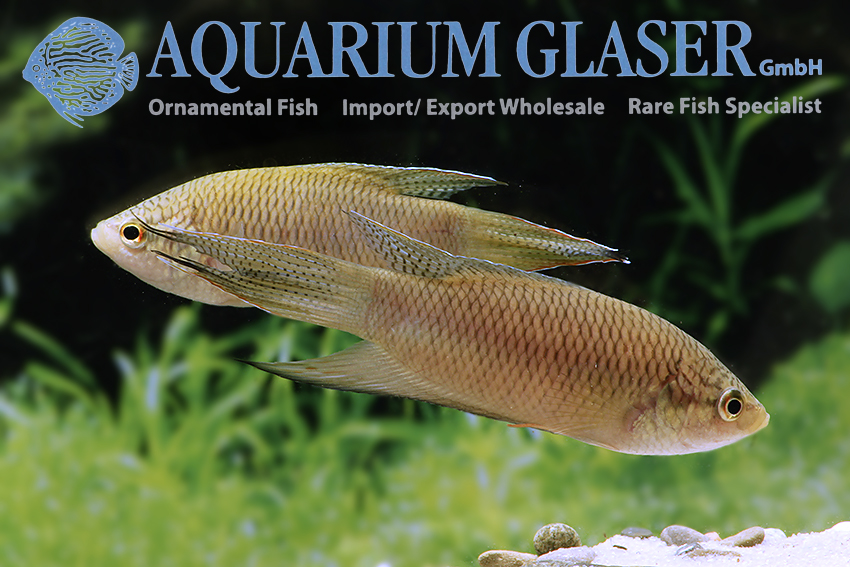 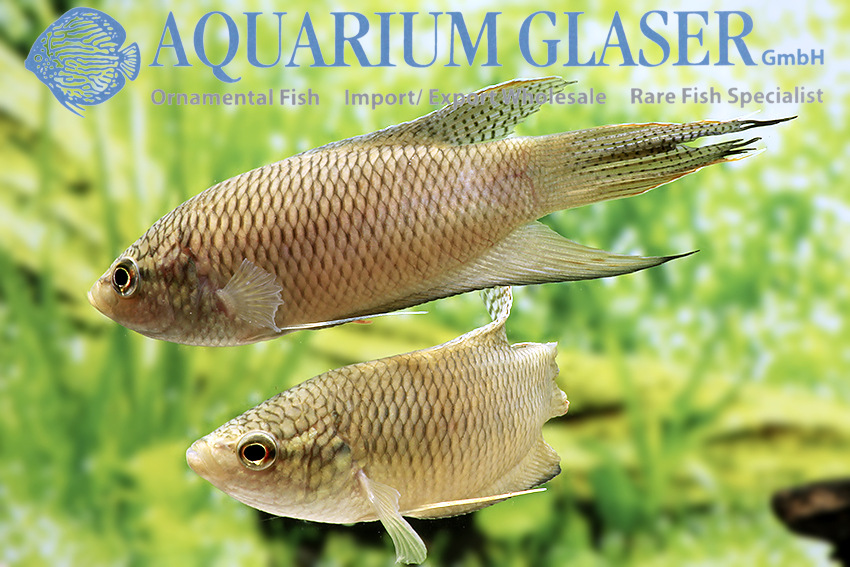 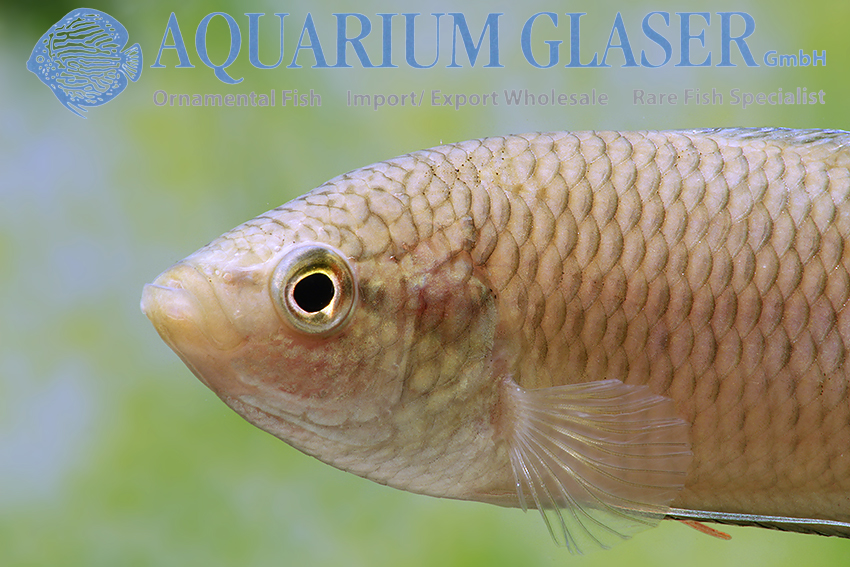 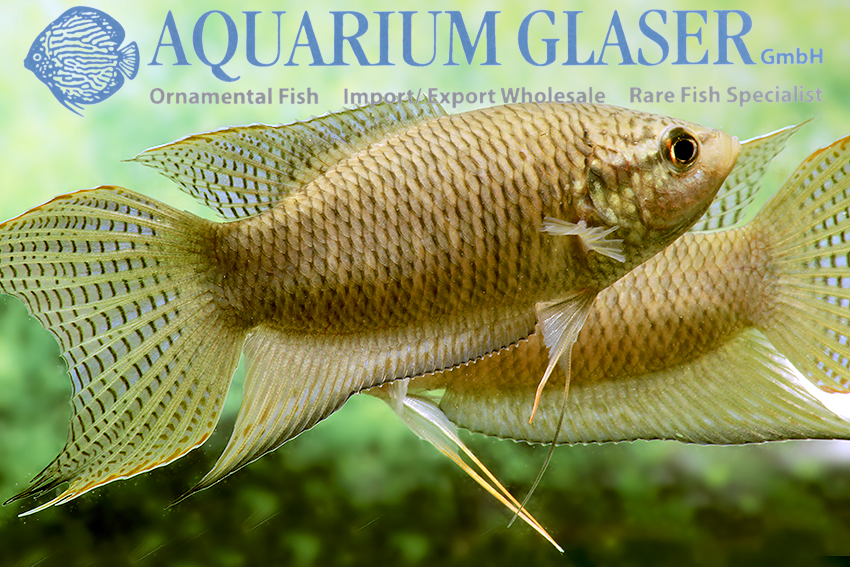 In contrast to “normal” Macropodus spechti, the current import animals are lighter in colour, have longer ventral fins and a rather yellow (instead of red) iris. Since the black paradise fish prefer running water, it could be a specially adapted form living in brooks. We are very curious to see what the offspring of these unusual black paradise fish will look like. They should definitely be kept, cared for and bred separate from other populations of Macropodus spechti, because it is by no means out of the question that they represent another species.

For our customers: the animals have code 425604 on our stocklist. Please note that we only supply wholesalers.